The leftist press are always coming to the defense of Black Lives Matter. Conservatives daring to criticize them as looting, rioting, and crime are on the rise are desperate fearmongers. On Monday, Politico reporters Laura Barron Lopez and Alex Thompson penned an article titled "Facing bleak November, Republicans look to stoke BLM backlash."

That was mild language compared to the lede:

Republicans are using two lines of attack: the Trump administration, candidates in safe red seats and right-wing social media channels seek to label the entire movement “Marxist” and anti-family as they try to energize their conservative base.

It's always fascinating to see reporters use "stoking fear" even as their favorite politicians are "stoking fear" about massive coronavirus surges and Russian election interference. But they can't quite deny that the BLM founders said they are trained in Marxism and issued an agenda promising disrupt the "Western-prescribed nuclear family structure."

Instead, they try the usual lame tactic of saying the BLM movement is far too complicated -- "a decentralized ecosystem" -- to nail down as menacing. This is the same game they play with Antifa. Oh, they're so disorganized:

Though Black Lives Matter is a decentralized ecosystem that encompasses more than 150 organizations, Trump’s allies are trying to wed the entire movement to the personal beliefs of a pair of self-described Marxists who formed the Black Lives Matter Global Network in 2013, in the aftermath of the killing of Trayvon Martin. Many other supporters and leaders organizing under the Black Lives Matter banner — which is now considered to be the largest racial justice movement in the history of the country — don’t identify with Marxism.

Later in the piece, they acknowledged the conservative argument is based in reality, even if they don't like it: 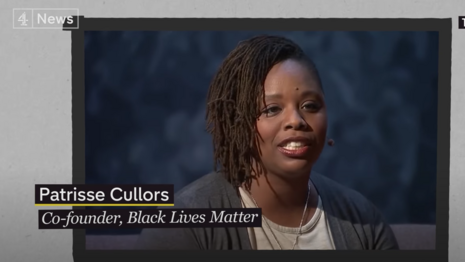 Conservative critiques are based on the fact that two founders of Black Lives Matter Global Network, Patrisse Cullors and Alicia Garza, are self-declared Marxists — a description Cullors used in a 2015 interview. Republicans have also criticized language on the network's website which says one of its missions is to “disrupt the Western-prescribed nuclear family structure requirement.”

Garza and Cullors first made the #BlackLivesMatter hashtag go viral after the acquittal of Martin's killer. Their group also owns BlackLivesMatter.com and has been an advocate of defunding the police.

Then they turn to a BLM member to claim that the conservative critique isn't really succeeding:

Melina Abdullah, a Pan-African Studies professor at California State University, Los Angeles and head of BLM's LA chapter, wrote the passage on the nuclear family that is featured on the BLMGN website. Abdullah explained that it is an “affirmation of the African principle that it takes a village to raise a child. It's invoking the idea that all of us are responsible for our collective children.”

Republican efforts “to assail that statement actually has opened up an important conversation within the Black community,” Abdullah said. “It hasn't had the backlash that I think that they wanted it to have.”

As usual, leftist journalists seek to paint radicals as the mainstream, and conservatives as the extreme: "With just under three months until the election, Black Lives Matter has won mainstream support across racial and partisan lines that would have been almost unthinkable six months ago."

The future always has a liberal bias at Politico.