The New York Times loves its motto that Truth is now more important than ever. But some days, they can't seem to locate the truth. Veteran Times columnist wrote a column for Saturday titled "No Wrist Corsages, Please: Has America grown since 1984, or will the knives still be out for Biden’s running mate?" Like many Democrat women, Dowd is already imagining the horror that Biden's running mate will be....man-handled by critics.

She recalled Walter Mondale's historic choice of Rep. Geraldine Ferraro in 1984. "The feminist fairy tale — which began with women crying and popping champagne on the convention floor in San Francisco in 1984 — had a sad ending. Cinderella with ashes in her mouth." But then she wrote something that wasn't true at all, as the newspaper's tweet magnified: 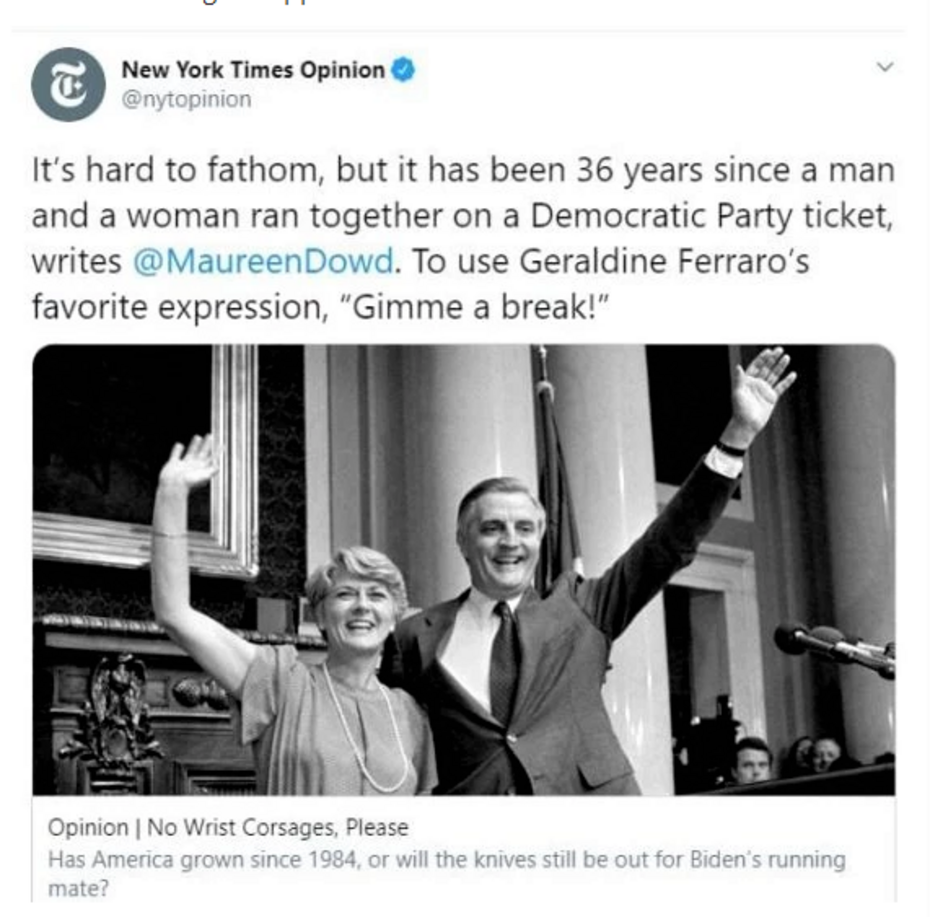 As Twitchy reported, Dowd somehow was somehow so deprived of brain cells that she could not recall that Hillary Clinton ran with a male running mate, Tim Kaine, just four years ago. Somehow, the vaunted truth-preserving copy editors also failed to perform a very easy fact check. But then Hillary (or her ghost-tweeters) really threw a brick at Dowd, making a joke about pot-brownie consumption: 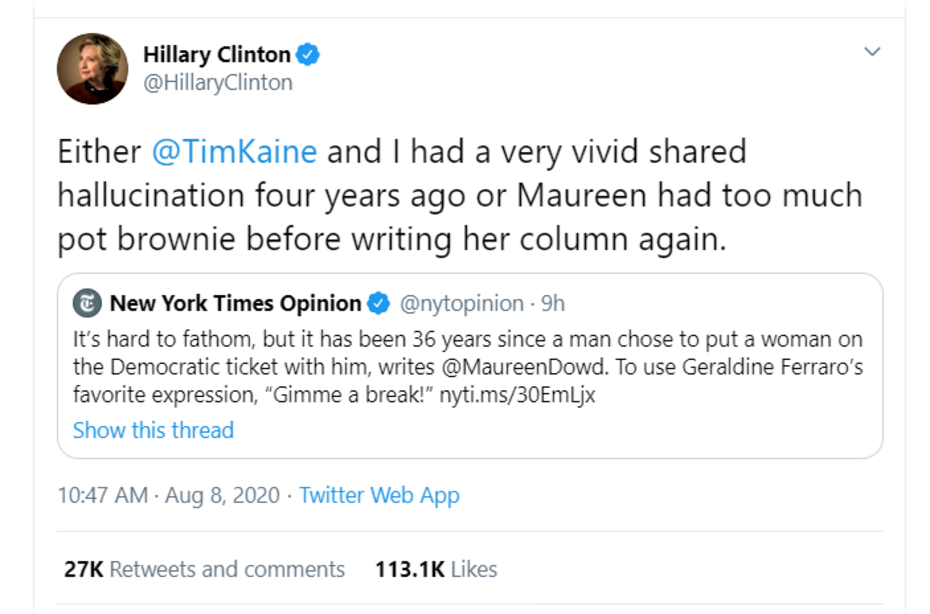 Reminder: Dowd won a Pulitzer Prize for her 1998 columns -- the Year of Our Intern -- letting the Clintons have it, so obviously Mrs. Clinton isn't just going to let that go....

But the fact-mangling wasn't over yet! They also couldn't remember John McCain picking Sarah Palin in 2008. 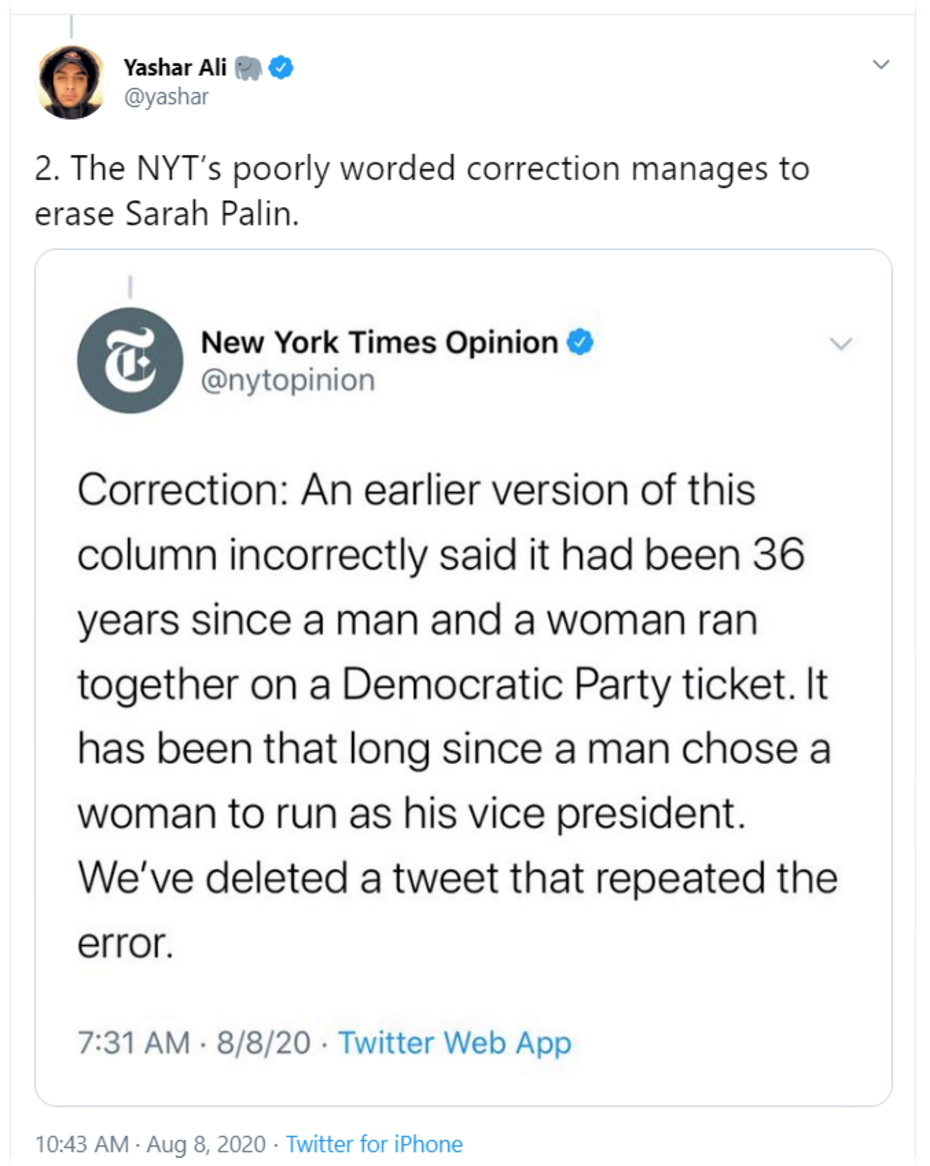 With all these errors, you would forget that what Dowd was trying to do was prepare the reader for a "sandstorm of sexism" from Team Trump, including "Kimberly Guilfoyle, Kellyanne Conway, Kayleigh McEnany, Lara Trump and Jeanine Pirro — the Fox Force Five of retrograde Trumpworld."

Dowd lamented 1984 some more: "What started as a goose bump blind date with history curdled, as Ferraro got dragged into a financial mess involving her husband’s real estate business....The next year, Ferraro put out a memoir talking about how depressed and paranoid she got, and how much she cried, admitting that she was not 'prepared for the depth of the fury, the bigotry, and the sexism my candidacy would unleash.'”

Naturally, Dowd didn't feel Palin's pain in 2008. She quoted a Palin parody as if it was real. She couldn't figure out this was a fake quote: "God made dinosaurs 4,000 years ago as ultimately flawed creatures, lizards of Satan really." She also trashed "Republican mean girls," like "teenage tormentors."