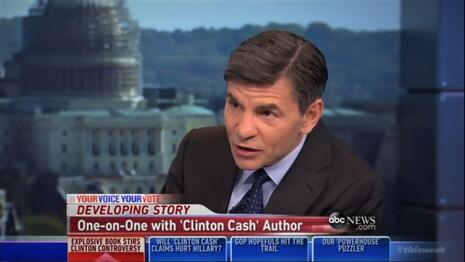 Four years ago this week, the leftists at Wikileaks tried to ruin the Democrat convention by posting a trove of emails exposing the Democratic National Committee blatantly favored Hillary Clinton and tilted against Bernie Sanders. But even then, the media downplayed the juiciest tidbits for conservatives: emails in Clinton aide John Podesta’s account that demonstrated how shamelessly reporters and Democrats work hand in hand to shape the “news.” Some might even say it sounds “fake.” For example:

1. ABC’s George Stephanopoulos harshly interviewed Clinton Cash author Peter Schweizer on his Sunday show on April 26, 2015. In an e-mail, Clinton campaign staffer Jesse Ferguson boasted Stephanopoulos “refuted” Schweizer.  “Great work everyone. This interview is perfect. He lands nothing and everything is refuted (mostly based on our work).”

Stephanopoulos didn’t just donate to the Clinton Foundation. He donated at the office.

2. Maggie Haberman was singled out as a pliant recycler of the Clinton narratives: “We have has [sic] a very good relationship with Maggie Haberman of Politico over the last year. We have had her tee up stories for us before and have never been disappointed.”

Now match that with Maggie Haberman, the heroic challenger of all things Trump for The New York Times. She’s not a journalist first, she never disappoints at “teeing up stories” for Democrats.

3. CNBC anchor Becky Quick – who helped moderate the atrocious CNBC Republican primary debate in 2015 – promised Podesta after Obama nominated Sylvia Mathews Burwell as HHS secretary: “I will make sure to defend her when things get further along in the nomination process.” 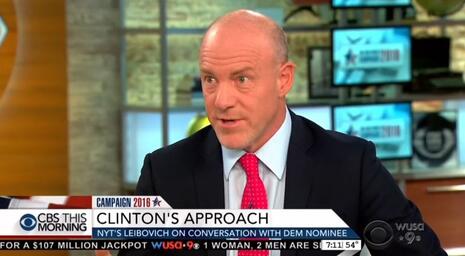 4. Mark Leibovich of The New York Times Magazine told Hillary’s communications director Jen Palmieri “you could veto what you didn’t want” for quotes to be included in a Hillary profile in July 2016. At the end of an email, Palmieri listed her vetoes, then shot back like a demanding boss: “Let me know if that is not clear. Working from an iPhone on the plane so am not able to access the transcript to cut and paste.”

The Clinton campaign got cut-and-paste privileges!

Leibovich had quoted Hillary talking about eating moose stew, and mocking Sarah Palin on her moose chatter. Palmieri instructed: "Fine to use the moose, but appreciate leaving the mention of Sarah Palin out." She also instructed Leibovich to change another quote Clinton made about gay rights.

If you think this sort of collusion isn't happening right now between Biden's aides and the journalists who want Trump bounced from office, then you’re dreaming. Even worse, CBS later brought on Leibovich to discuss Wikileaks....and never mentioned any of this!

In February of 2016, the website Gawker also published a cache of e-mails between reporters and Hillary Clinton PR operative Phillippe Reines. The best example was Marc Ambinder, a longtime ABC and CBS reporter then with The Atlantic.

In July 2009, Hillary was delivering a speech at the Council on Foreign Relations. Ambinder wanted an advance copy. Reines insisted on conditions. "You must describe her tone as 'muscular,' and you must note that her most prominent underlings at the State Department (George Mitchell, Richard Holbrooke) would be seated in front of her to convey her command of the staff."

“Got it,” Ambinder replied, like a cheerful waiter. Later that day, he published a story Xeroxing Hillary’s spin right at the top, touting a “muscular speech” Hillary would deliver that day in front of her rival “power centers” in the State Department.

This is how reporters are exploited by anonymous “senior administration officials” to set the table for Democrats, whether they are in power or not.