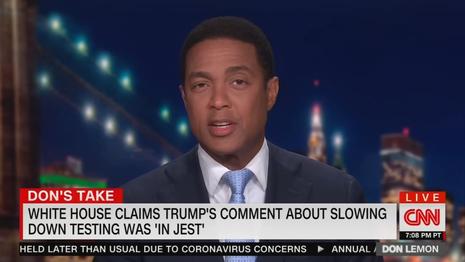 On May 20, CNN’s Cuomo Prime Time aired one of those jokey interviews between CNN host Chris Cuomo and his brother, New York Gov. Andrew Cuomo. The governor had submitted himself to a coronavirus test on camera. Chris decided to mock the size of his brother’s nostrils by unveiling a series of ever-larger Q-Tips (or test swabs) and cracked his brother up.

CNN happily posted the fun on YouTube under the headline “Chris Cuomo teases brother Andrew with giant test swab,” now at about 693,000 views.

Before that, Chris asked his brother “First of all, is it true that when you are having the test administered, you inhaled and the doctor's finger went all the way up your nose and got stuck and it had to be released with a tool?”

So it was an epic series of hypocritical outrages on June 21 and 22, after President Trump seemingly made a wisecrack at his Tulsa rally about slowing down coronavirus testing. Surely, most Americans would tell a pollster that both of these routines were distasteful. But CNN only raged about one.

The most feverish outburst came from CNN daytime host Brianna Keilar in an interview with Trump spokesman Tim Murtaugh. She pummeled him with shame: “I mean, Tim, 120,000 Americans dead. I do not think that is funny. Do you?....You said it's a joke?....Is it funny, Tim?....Dead Americans? Unemployed Americans? Is that funny to you?”

But that was one of many. Let’s scroll down through just a fraction of the joke-shaming.

1. Sunday at 8 am, CNN host John King: “They say the president is joking, but is this a time for jokes?” Dr. Ashish Jha: “This is unfortunately not a joke. It's led to more than 100,000 Americans having died.”

2. Sunday at 9 am, Jake Tapper to Trump aide Peter Navarro: “I'm not sure that a deadly pandemic, where almost 120,000 Americans -- are really a good subject for a light moment.”

3. Sunday at 5 pm, CNN reporter Boris Sanchez: “A joke, even as the virus has claimed nearly 120,000 lives here in the United States. A joke, even though six of the president's own campaign staffers have tested positive for the virus while they were working on this rally that health experts begged him not to have.”

4. Monday at 8 am, John Berman: “It’s an outrageous statement. The White House now says he was joking. It’s a pretty bad joke with 120,000 people dead from the coronavirus--you can see that on our screen right now. So I don’t know why he would think that was funny.” Dr. Sanjay Gupta claimed it “felt like a real travesty, you know, nearly criminal.”

Nearly criminal. But no handcuffs for Chris Cuomo.

Chris Cuomo had a chance to be the Perfect Hypocrite. But he took the night off on Monday. Would anyone guess they had the slightest shame or scruple at CNN?