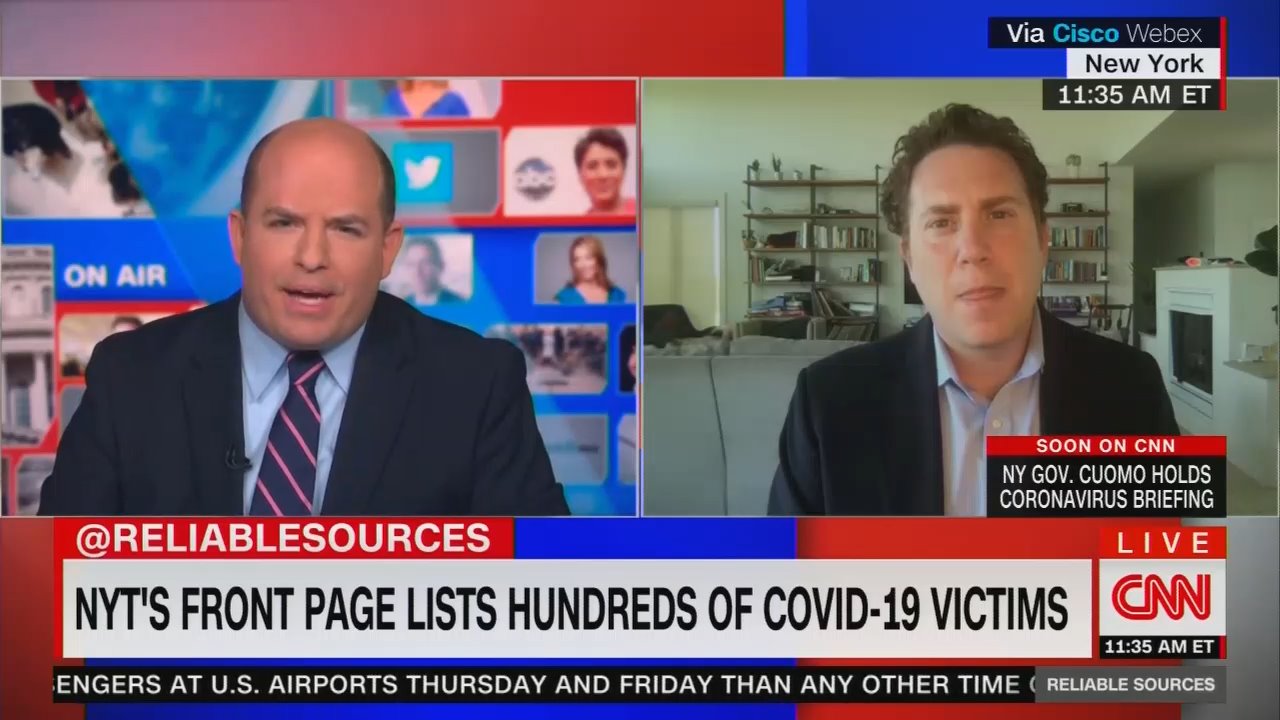 CNN Reliable Sources host Brian Stelter said something fascinating on his show Sunday. He complained to New York Times media columnist Ben Smith that "I don't know how to show folk that journalists are mostly acting in good faith."

Here's how a show allegedly focused on journalism fails to show good faith. Stelter had on a writer from The Atlantic to discuss the coronavirus and never whispered a word about The Atlantic projecting that Gov. Brian Kemp's reopening of Georgia would be an "experiment in human sacrifice."

Instead, he merely asked Ed Yong "As a science writer, you know, you're studying this every day, where are you on the optimism/pessimism scale?" On Georgia, they were extremely pessimistic! That looks like Stelter wants to avoid any attempt at holding media outlets accountable.

Stelter complained to Smith about "all these trolls on Twitter" as if those were the only critics of the media worth engaging. Smith came on to discuss his latest piece, about how Ronan Farrow's reporting could be a little too cinematic, and leave out facts that take the drama out of his narratives. He wrote about how Farrow offered a Fake News story about Michael Cohen's financial records through an anonymous source and a CNN favorite, Michael Avenatti.

Smith told Stelter that journalists need to be more transparent, show more of their work, be more willing to admit that reporting is flawed in the daily grind. Stelter suggested that humility would just be abused:

STELTER: Let me give you an example involving your paper. That incredible front page this morning with the thousand names of COVID-19 victims. Some sleuths on the internet found that one of the thousand names died of a homicide, not of COVID-19. And then all these trolls on Twitter tried to act like this entire thing was discredited, that it was all fake news.

Now, of course, shame on them for trying to take one error and smearing the entire New York Times with it. But that's the world we live in, isn't it? We have these bad faith actors that take good reporting, good but flawed reporting and try to smear with it.

Stelter wasn't engaging with critics like Steve Krakauer, who called this front-page death-count stunt "gross," and a "listicle," not a news report.

SMITH: You know, I'm not sure about good faith and bad faith, I just think all reporting is going to be flawed.

SMITH: It's always the best we can do. It's always -- we're trying to get you as much as we know when we know it. And I think to the degree that we pretend otherwise, that sets us up for a kind of criticism. Every journalistic project has errors. Sometimes you get things totally wrong. Often you get things a little wrong and the best thing you can do is correct them as fast as you can. And I think we ought to be straight with our audiences about that.

STELTER: My concern is that we live in an environment where any error turns into a conspiracy and turn into a proof of a plot and that's damaging. I don't know how to fight back against that though. I don't know how to show folk that journalists are mostly acting in good faith.

Ben Smith's answers here offered an answer to a better way for the press to engage with critics -- more transparency, more willingness to admit error. It's too bad Stelter can't imagine taking that course.