On Sunday's State of the Union, CNN host Jake Tapper tossed softballs to Democrat Gov. Gretchen Whitmer of Michigan, suggesting protesters against her lockdown policies are frightening and even comparable to neo-Nazis in Charlottesville.

Leftist protesters are generally presented as the forces of democracy and justice, but conservative protesters get the shaft. The CNN chyron was "PROTESTERS, SOME ARMED, DESCEND ON MICHIGAN CAPITOL". Descend? Like vultures? Or Kamikaze pilots?

Does anyone think CNN would have covered the Ferguson riots with "BLACK LIVES MATTER DESCENDS ON FERGUSON"?

Tapper raised the issue of protests, not to press Whitmer, but to enable her:

TAPPER: I want to start with these protesters who entered the Michigan Capitol building on Thursday. We all understand people out there are feeling the economic pain right now, but what did you make of the protesters with firearms inside the state Capitol? I know some Democratic lawmakers expressed concern, and fear even.

Peaceful protesters carrying large guns can frighten people. But they're not burning buildings down....like in Ferguson. Back, then CNN host Don Lemon expressed sympathy for rioters and looters, he said "I understand."

And what about Antifa? CNN's Chris Cuomo argued Antifa violence was morally superior to Nazi violence. " Lemon implied Trump was racist for connecting Antifa to the Democrats, and then toed Cuomo's line that anti-racist violence is different.

But gun enthusiasts cause CNN to report on protests (like those in Virginia in January) as "very, very, very ugly." They said that before protests peacefully unfolded.

On CNN, Whitmer told Tapper “displays like the one that we saw at our capital is not representative of who we are in Michigan. There were swastikas and Confederate flags and nooses and people with assault rifles. And that's the very -- that's a small group of people, when you think about the fact that this is a state of almost 10 million people, the vast majority of whom are doing the right thing.”

That's an awfully vague smear. Some people with swastika signs were mocking Whitmer as a Nazi (one with the words "HEIL WHITMER.") Even liberal fact-checkers noted an alleged swastika sign in Michigan...was actually a picture from Idaho.

The protester footage CNN aired didn't have any nooses, swastikas, or Confederate flags. The local news story showed  American flags, alongside some Trump flags and Don't Tread On Me flags:

TAPPER: These protests came after President Trump tweeted "Liberate Michigan." He tweeted -- quote -- "The governor of Michigan should give a little, put out the fire."

He said that these are very good people about the protesters that were featured in the video, to which the executive director of the Jewish Democratic Council of America, Halie Soifer, who's from Lansing, Michigan, she compared those comments to President Trump referring to those marching alongside neo-Nazis in Charlottesville as very fine people.

Is that how you see these protesters, in that vein, in that extreme?

WHITMER: Well, some of the outrageousness of what happened at our Capitol this week depicted some of the worst racism and awful parts of our history in this country. The Confederate flags, and nooses, the swastikas, the behavior that you have seen in all of the clips is not representative of who we are in Michigan. 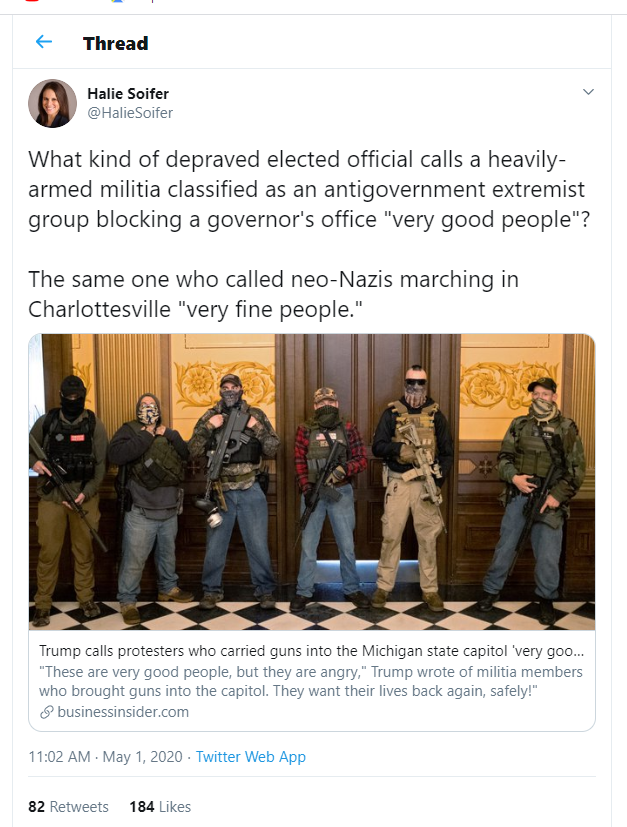 The Left doesn't think anyone could protest taking down a Robert E. Lee statue without being some kind of white supremacist.