On the PBS NewsHour Friday night, pundits David Brooks and Mark Shields trashed President Trump's "North Korean-style loyalty tests" and praised Bernie Sanders for making a socialist moment. Brooks said a commission to make recommendations on reopening the economy is a good thing, but there's the sense that being nice to President Trump is essential to being appointed.

"If you said anything nasty about Donald Trump, you don't qualify for the committee. And that basically guarantees a very low level of competence from that committee. The North Korean-style... loyalty tests are going to be crushing to the competence of any effort going forward."

If that's the test, Brooks would never make it, which might explain his fit of pique, since he's qualified enough to judge everyone else on television. Shields agreed, going back to complaining about the Democrats impeaching Trump, saying after it was over, Trump went "after career professionals, dedicated professional public servants, who have given honest testimony." He said "we're in a grave situation in terms of leadership."

This spurred Woodruff to ask about the president dismissing the inspector general overseeing the intelligence community and swapping which Inspector General would oversee the Pandemic Response Accountability Committee. Brooks repeated himself: "Well, it's more North Korean loyalty tests. It's a political vendetta, straight and simple. And you got to be a total loyalist."

The PBS pundits were much warmer to Sanders as he suspened his presidential campaign. 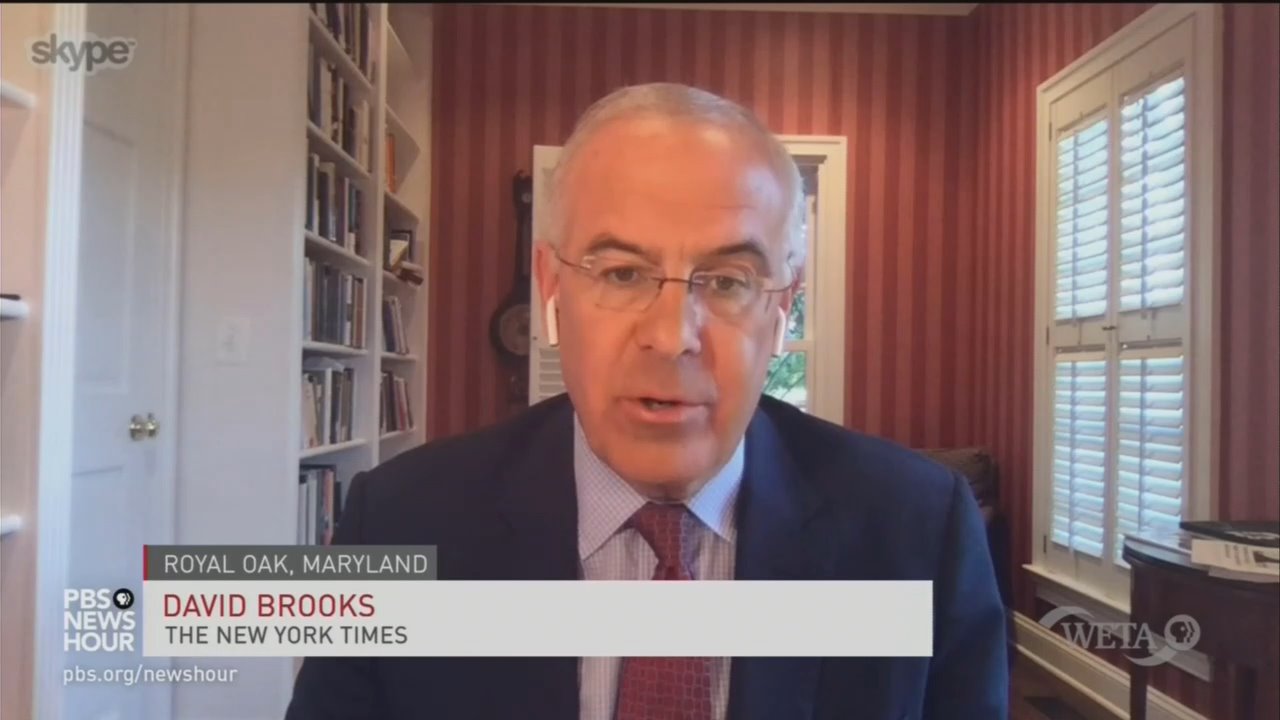 BROOKS: I think the thing that's inspiring about Sanders, whether you agree with him or not, here's a guy who is fighting for a cause and has fought for it for decades, five or six decades, and he's never budged. He's been in the wilderness for decades.

And I imagine he's still in it for the long game, whether he's president or not, that some of his ideas will come to fruition with a new generation.

Brooks does NOT feel this way about conservatives who fight strongly for conservatism and against socialism. He compared Ted Cruz to Satan.

As usual, Shields agreed, as Woodruff asked what influence he would have on Biden:

I mean, Bernie Sanders dominated the dialogue of the last five years of the Democratic Party. And it was a signal achievement, what he achieved, in bringing crowds of people, of raising money, and from more people than any candidate, I believe, in the history of the Democratic Party, individual contributors. Just absolutely remarkable.

SHIELDS: I think, ironically, it's Bernie Sanders' moment after that interview. I mean, if anything has laid bare the income inequality, the economic inequality and disparity in this country, beginning with health care, 10 million people, I don't know how many million of them have lost their health care in the last three weeks.

But what Bernie Sanders talked about is laid bare before us right now.

It's only natural that government-subsidized television news networks are going to favor government-run health care.