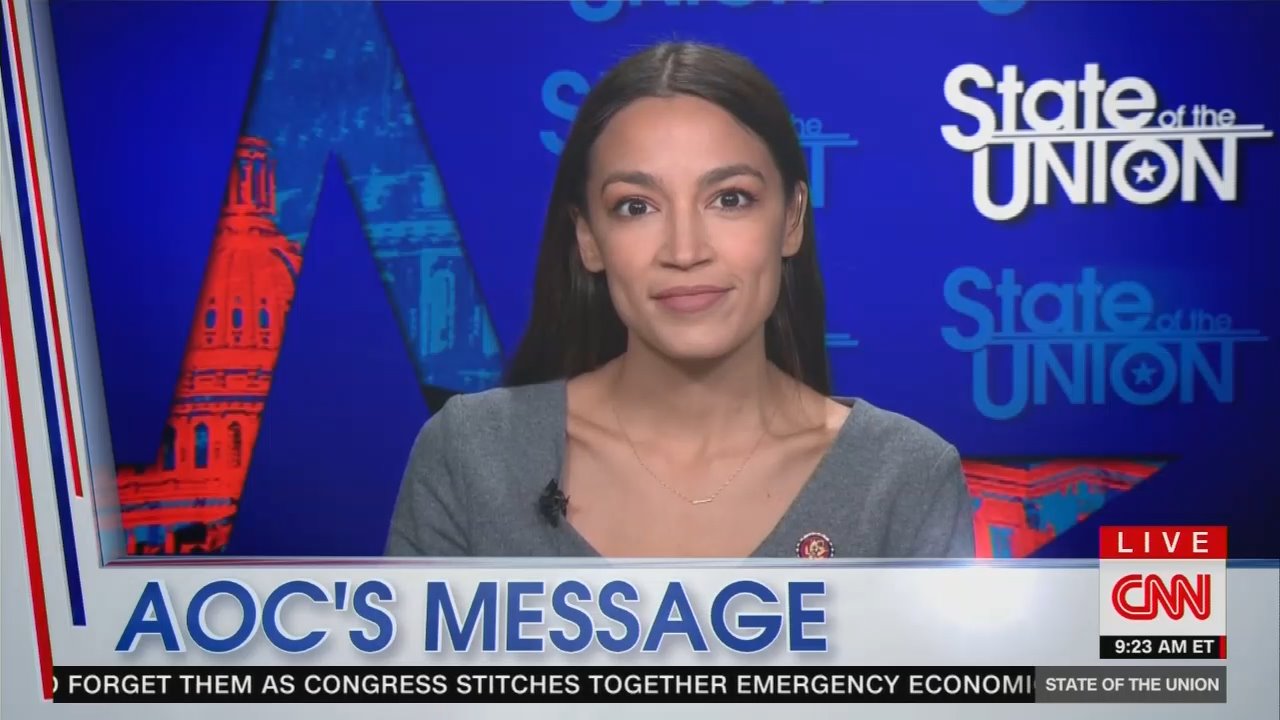 Emma Colton at the Washington Examiner reported Team Trump upbraided CNN State of the Union host Jake Tapper on Sunday for failing to fact-check socialist Rep. Alexandria Ocasio-Cortez after she -- like many leftists -- pushed the lie that President Trump called the coronavirus a "hoax," when he said the Democratic attempts to ruin him by exploiting the coronavirus response was a "hoax."

It should be said that Tapper is generally more polite than other CNN hosts and doesn't interrupt every ten words (well, mostly with Republican or conservative guests). But even at the end of the AOC oration, he just changed the subject. She was decrying that somehow the country hadn't "started" mass production of masks or ventilators.

OCASIO-CORTEZ: And the fact that the president has not really invoked the Defense Production Act for the purpose of manufacture -- of emergency manufacture is going to cost lives.

TAPPER: The FEMA administrator, I asked him about that. He said, it's not needed because so many American companies are stepping up to the plate and volunteering to do the right thing. Your response?

OCASIO-CORTEZ: It is absolutely needed. We are thankful to anyone who's pitching in on this effort, but we are nowhere near the beds, the capacity -- and the capacity that we need in this country.

And we cannot wait until people start really dying in large numbers to start production, especially of more complicated equipment like ventilators and hospital beds. We need to start this production right now to get ready for the surge that is coming in two to three weeks.

Then Tapper moved on: "Let's turn to Congress. Right now negotiations are ongoing on an economic stimulus package. Chief White House economic adviser Larry Kudlow said yesterday it could be as high as $2 trillion. You suggested that's still not enough..."

This is not a good look after lecturing "we cannot ignore that much of Mr. Trump’s personal response to the pandemic has been insufficient and deceptive and not focused enough clearly on one issue—saving lives.”

Trump-backing former CNN contributor Steve Cortes tweeted "Even the Washington Post debunked this smear — and yet CNN airs it without pushback. Journalism takes a backseat to activism as long as the narrative impugns Pres Trump..."

Trump "rapid response" aide Abigail Marone tweeted "This would've been a great time for a fact check," and Tapper replied to her:

I thought about it, because the president did not call the virus a hoax. But i didn’t because he *did* call a hoax the concerns of those saying that the response from the president was insufficient and that he was downplaying the gravity of the crisis. And that too was a lie. 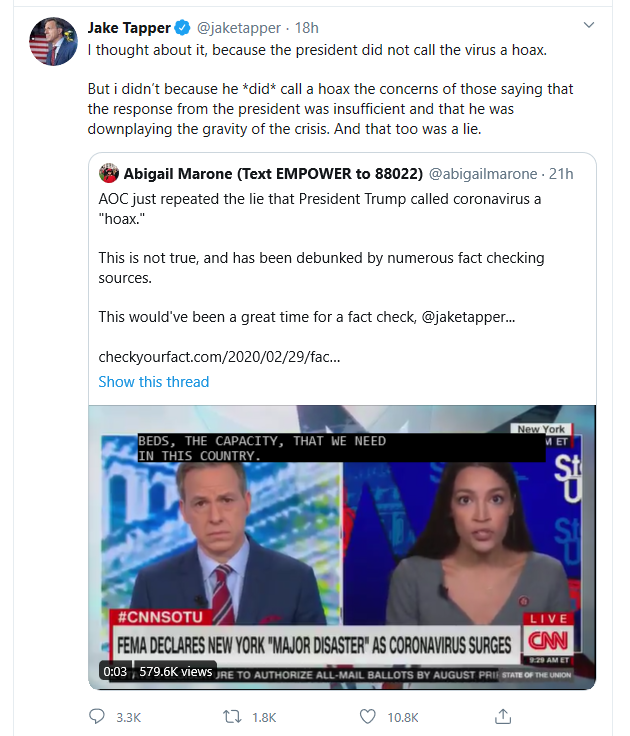 Journalists don't like the word "hoax" any more than they like the words "fake news," but it's far too cute to downplay and pretend that the Democrat/media response that Trump is going to "cost lives" (kill people) with his incompetence is just mildly "saying the response from the president was insufficient."