Washington Post scribe Robin Givhan is supposed to do fashion writing, but it's always smarter to see her as a political columnist who uses fashion as an inspiration. This latest column has almost zero to do with fashion. The headline is:

Why won’t Trump practice social distancing at his daily briefings?!

This is a common liberal kvetch on social media, that the Trump team should lead by example and be six feet apart on camera. After all, the reporters in the briefing room have been reduced by more than half and fanned out to create space. 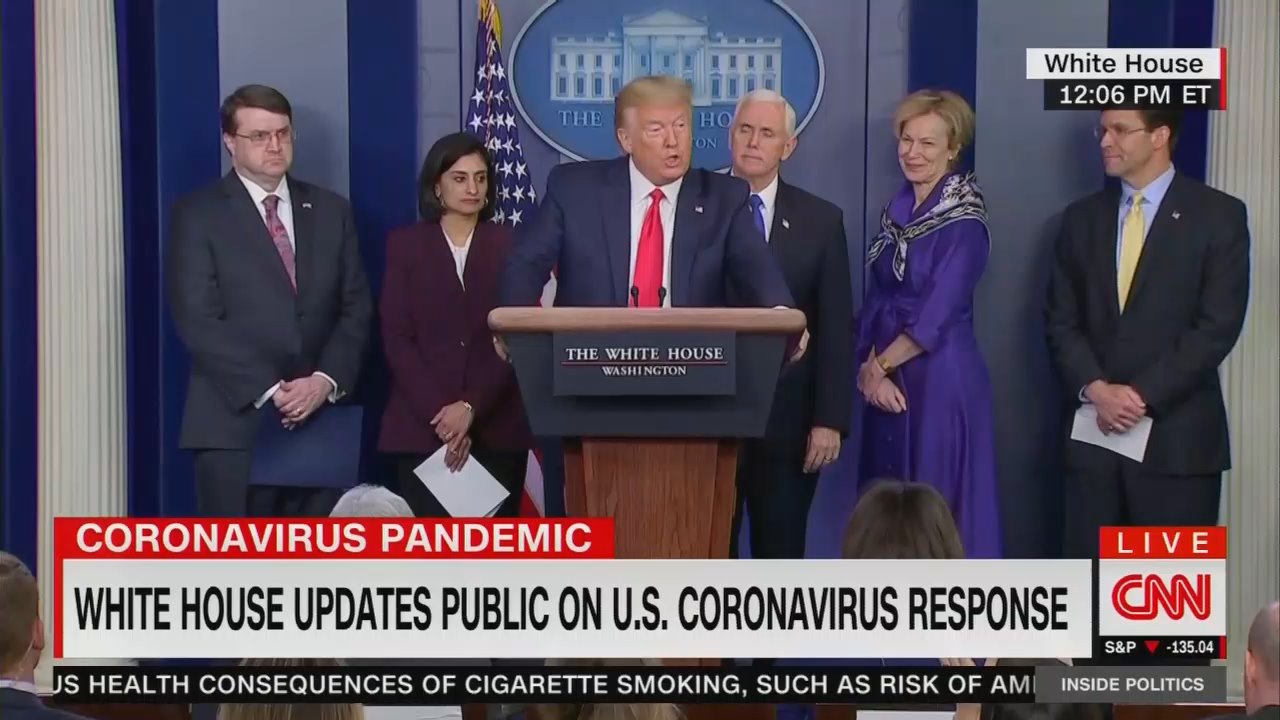 The president and his task force give their daily briefings on the coronavirus pandemic huddled together — shoulder to shoulder, behind a single lectern in the White House press room. President Trump stands at the center of this essential group with Vice President Pence to his left.

On Wednesday afternoon, there were four other officials in this task force cluster — all standing within sneezing, coughing and spitting distance of one another.

The briefing room scene Wednesday was not an anomaly of togetherness. This is the White House routine in these unparalleled times.

When the world has been told to maintain six feet of personal space, the sight of these VIPs snuggled up next to one another is jarring. For a president skilled in stagecraft, it speaks volumes about his message — which is both self-centered and aggressively confident.

It seems obvious they have kept these officials shoulder to shoulder to provide a visual cue of a whole team at work. Anyone and everyone can second-guess this. But if this were Obama's team, Givhan would write about someone else's judgments. She's certain Trump is lining up "possible scapegoats".

From his position at the center of this performance, he maintains his starring role. He holds focus wearing his navy suit and his bright red tie. His face ruddy; his eyelids not. For anyone watching from home, he is in the center of the television frame, but he is never alone in it. He is never depicted as a solitary leader — the sole responsible party. Instead, he’s the chief delegator and all the people behind him are the responsible ones, the possible scapegoats.

If this all goes to pot, these are the people to blame. If all goes well, he’s onstage for the applause.

Givhan throws in the suit and tie for a passing fashion mention. Later, she included some appreciation for the style of Deborah Birx, the coronavirus response coordinator: "Voluminous scarves wrap around her neck or her shoulders. Her hair is piled high in back. She likes earth tones and jewel tones, dresses and sweaters. Her manner is calm but concerned. She comes across as professional but also human."

In contrast to the president, no doubt.

Givhan contrasted Trump unfavorably to N.Y. Governor Andrew Cuomo, who sits alone at a table with visual aids -- a jug of hand-sanitizer, or a ventilator. This was the way to do it, to bravely imply the Buck Stops Here:

The governor was seated behind a table. Three of his colleagues were with him, but they were situated at some distance from him and from one another. So when the TV cameras framed Cuomo, he was alone. And if there was any visual message, it was that he was in charge. He was the guy getting it right, or possibly getting it wrong. Either way, he was your guy.

Trump's tableau sends a different message: "this huddle of humanity pulled in closely underscores what he does not want anyone to forget: This is not his fault. This 'Chinese virus,' as he insists on calling this global pandemic, came from afar and ruined his beautiful economy."