Washington Post "humorist" Gene Weingarten made fun of his own paranoid confusion in Sunday's Washington Post Magazine. CBS News wanted to work with him for a 48 Hours segment. It's the show's normal bread and butter: a "dreadful murder that led to a successful heart transplant."

Then Weingarten heard one of the producers there was named Peter Schweizer...which somehow set off the smell of Satan. Which is odd, considering the man is an atheist. (He also compared Harvey Weinstein to Satan last year.) 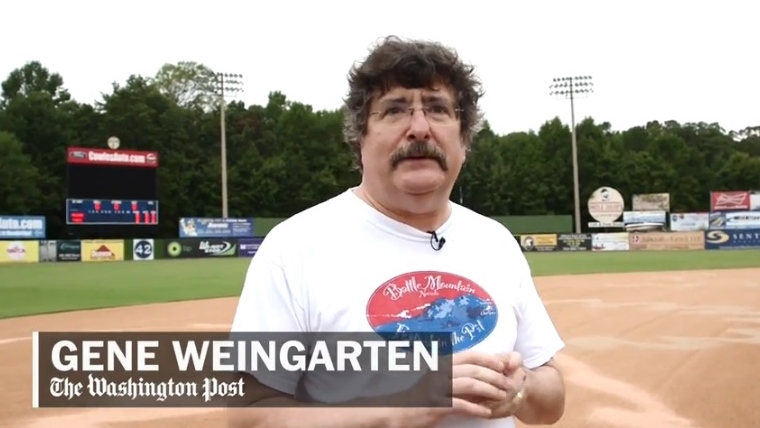 After we got off the phone, I stopped dead in my tracks and my eyes narrowed suspiciously, Columbo-style. I realized I had recognized that name, Peter Schweizer, from somewhere, and the context wasn’t good. So I took to the Internet, and here he was: Peter Schweizer, a man who is, essentially — and I don’t mean to be overly dramatic — Satan’s evil stepfather.

Schweizer is a "senior contributor" to Breitbart, and as much as liberals love listing all the "phobias" and hatreds that conservatives "famously" exploit, attacking Schweizer by reciting clickbait headlines is a little like connecting Weingarten to Washington Post headlines, like touting the leader of ISIS as an "austere religious scholar." Or the obituary hailing Fidel Castro as a "spiritual beacon."

Just to be sure I had the right guy, I cross-checked Peter Schweizer’s Wikipedia entry with the respected entertainment website IMDb. The guy in both photos was the same. Same wife. Same credit as executive producer of “48 Hours.” As an unreconstructed liberal, I felt like Simon Wiesenthal discovering he had inadvertently partnered with Mengele.

I called Liza, asked her if she was alone. “Yes,” she said. “WHY AM I WORKING WITH PETER SCHWEIZER?” I said, trying to seem composed but sounding like a Madagascar hissing cockroach. I heard an intake of breath over the phone, and she said, stiffly, that she’d have to get back to me. I theorized that Satan’s evil stepfather had just walked into the room (and that surmise proved to be true).

It's true that "comically righty" Schweizer has two IMDB credits for 48 Hours...on the Investigation Discovery channel. But the name in question was Peter Schweitzer, with a T, a senior producer at CBS News. Mr. With a T protested to his CBS colleague Liza: "That's not me!....That's not my wife!"

So why write this up in the newspaper? Unless you think it's "funny" to smear Mengele and "Satan's evil stepfather" on Peter Schweizer?

Weingarten doesn't find any reason to hiss like a "cockroach" over say, Louis Farrakhan. After Barack Obama won in 2008, Weingarten used him as a punchline:

Lefties on the Supreme Court. Nothing to worry about here. With Chief Justice Roberts and Justices Scalia, Thomas and Alito still alive and well, the court will probably remain reliably conservative for some time, despite the additions of justices Ayers, Franken, Chomsky and Farrakhan.