The New York Times and The Washington Post demonstrated again Sunday their warm feelings about communist dictators when they die. 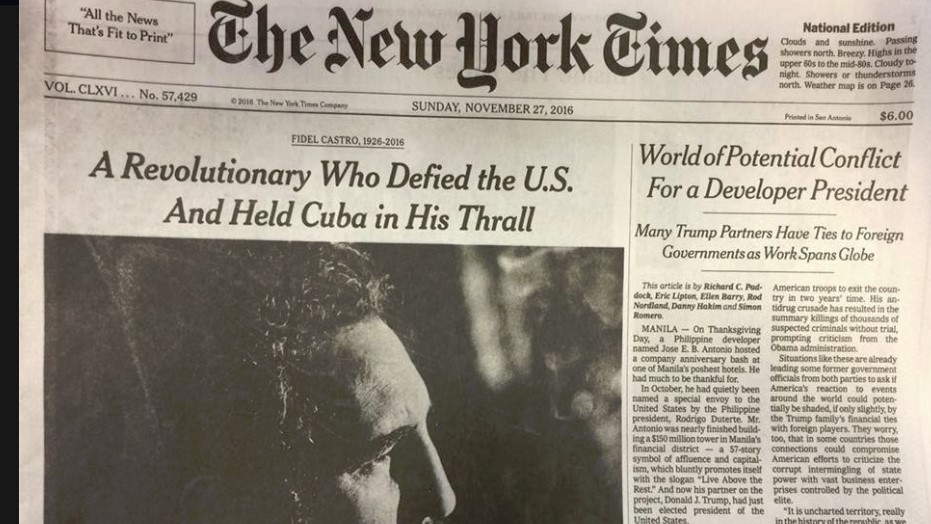 The Times headline was “A Revolutionary Who Defied the U.S. and Held Cuba In His Thrall.” The Post headline was slightly more balanced: “Revolutionary remade Cuba: Dictator who defied U.S. was loathed, beloved.”

For the Times, Anthony DePalma found a “fiery apostle of revolution,” not a dictator:

Fidel Castro, the fiery apostle of revolution who brought the Cold War to the Western Hemisphere in 1959 and then defied the United States for nearly half a century as Cuba’s maximum leader, bedeviling 11 American presidents and briefly pushing the world to the brink of nuclear war, died on Friday. He was 90.

While DePalma noted Castroites found a “savior” and Castro saw himself as a “messiah,” the word “tyrant” popped up in paragraph seven, after the story moved inside to page 12. 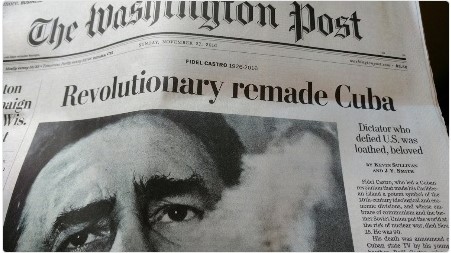 The same trick happened in the Post story. Kevin Sullivan and J.Y. Smith began the story this way:

Fidel Castro, who led a Cuban revolution that made his Caribbean island a potent symbol of the 20th-century ideological and economic divisions, and whose embrace of communism and the former Soviet Union put the world at the risk of nuclear war, died Nov. 25. He was 90…

In his homeland, Mr. Castro was as loathed as he was beloved. He was among the world’s most repressive leaders, a [continued on page 8!] self-appointed president-for-life who banned free speech, freedom of assembly and a free press, and who executed or jailed thousands of political opponents.

Back in 2006, MRC's Brent Bozell pointed out there's a pattern of this, established by the death of right-wing dictator Augusto Pinochet of Chile:

The Washington Post headline was "A Dictator's Dark Legacy" and the reporters began by reporting his government "murdered and tortured thousands during his repressive 17-year rule....leaving a legacy of abuse that took successive governments years to catalogue." His death left an "incomplete" crusade to seek "justice" for his reign in the courts.

The New York Times headline noted Pinochet was a "Dictator Who Ruled By Terror in Chile." The Times began by describing him as "the brutal dictator who repressed and reshaped Chile for nearly two decades and became a notorious symbol of human rights abuse and corruption." He was "never brought to trial." Both the Post and the Times used post-Pinochet government estimates that more than 3,000 people were executed or disappeared during the Pinochet dictatorship.

But the same liberal press that despises right-wing autocrats cannot bring that same vigorous denunciation to bear when a communist dictator dies. When Chinese dictator Deng Xiaoping died in 1997, the Post mentioned the "bloody crackdown" in Tiananmen Square in 1989, but the words "dictator" or "dark legacy" did not appear in the headline, which simply recited the fact of death: "China's Deng Xiaoping, Dead at 92." The Post reporter did not attempt to enumerate the thousands or millions killed on Deng's watch, or wonder why he was never put on trial.

The Post presented Deng as a great liberalizer, to a point. "Deng had guided the country out of the chaos of the Cultural Revolution, flung open China's doors to the outside world and loosened the grip of central economic planning," while, ahem, "insisting that the Communist Party's monopoly on power go unchallenged."

Some communist leaders couldn't even be accused of liberalizing tendencies. When Korean despot Kim Il Sung died in 1994, the New York Times couldn't call him a dictator in their headlines, let along mention ruling by terror. The second story on the death was headlined "Kim Il Sung, Enigmatic 'Great Leader" of North Korea for 5 Decades, Dies at 82."

The Times reporter proclaimed that to some Kim was "seen as a Stalinist maniac." (Note the qualifier "seen as.") And to others? There was also the "grandfatherly Kim Il Sung," a "smiling leader seeking respect for his economically disabled nation, the man who three weeks ago embraced Jimmy Carter" as a way of establishing contact with President Clinton.

When leftist Venezuelan strongman Hugo Chavez died in 2013, the Times headline was “Chavez Dies at 58 With Venezuela In Deep Turmoil.” Then came this subhead: “Crowds Mass in Capitol, Mourning Populist Who Defied U.S." They're in love with pols who defy America. The Post’s headline was neutral: “Anti-U.S. leader had promised revolution: Venezuela’s leftist president sought change across region.” Reporter Juan Forero said Chavez “went from a young conspiratorial soldier who dreamed of revolution to the fiery anti-U.S. leader of one of the world’s great oil powers.”