CNN really lays it on thick when it comes to its own preferred experts driving the impeachment of Donald Trump. Sen. Marsha Blackburn (R-Tenn.) attacked Lt. Col. Alexander Vindman on Twitter, which drove CNN into a rage on Friday morning. Vindman's testimony against Trump was played by Democrats during their presentation on Thursday. Blackburn tweeted:

Adam Schiff is hailing Alexander Vindman as an American patriot. How patriotic is it to badmouth and ridicule our great nation in front of Russia, America’s greatest enemy?

Alexander Vindman broke the chain of command and leaked the contents of the President’s July 25th phone call to his pal, the “whistleblower.” Over a policy dispute with the President! How is that not vindictive?

It makes sense that Alexander Vindman leaked the July 25th phone call to his friend (aka the “whistleblower”). They both have lots in common:

—Liberals who worked under Obama

—Wanted to take out Trump 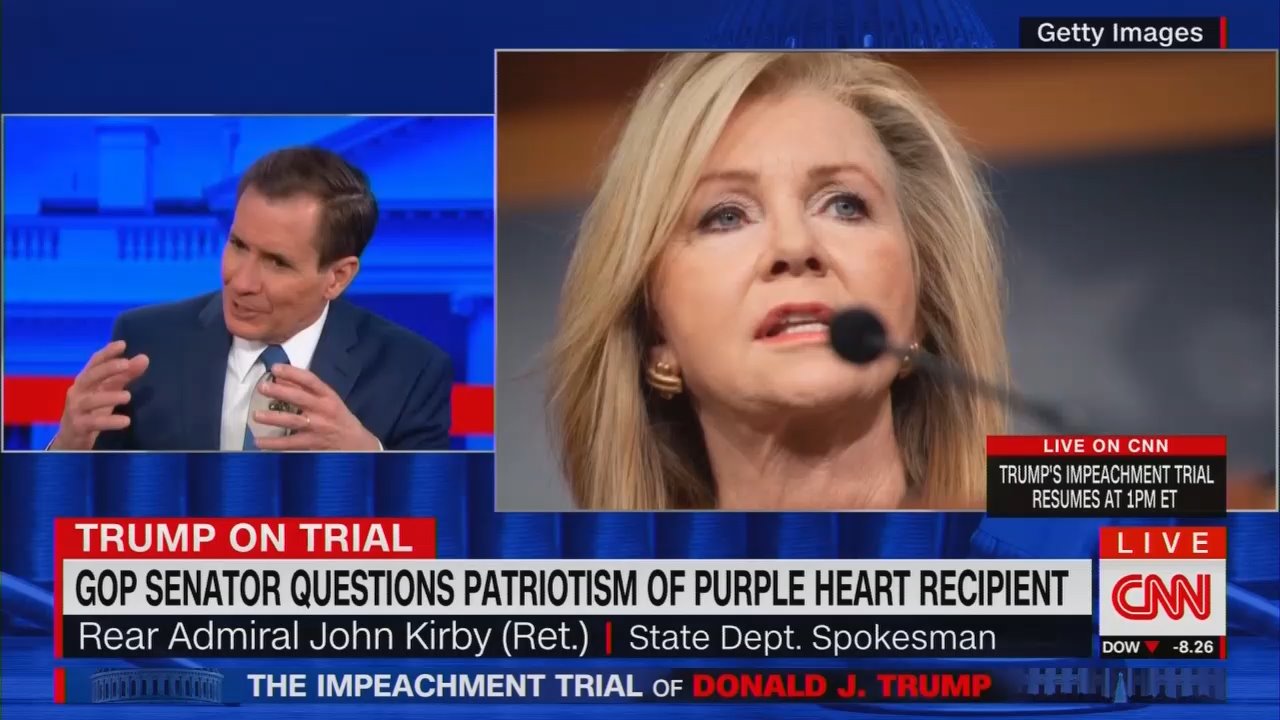 Democrats -- inside and outside CNN -- find it easy to equate patriotism with removing Trump from office. Earlier this month, we pointed out that reporters have come running to say Vindman is "falsely brutalized" when he's accused of helping the whistleblower set the impeachment train in motion. When Republicans attempted to ask Vindman in the impeachment inquiry if he leaked to the whistleblower, Rep. Adam Schiff shut down the line of questioning.

CNN and others have ignored Paul Sperry's reporting for Real Clear Investigations, which reported about Vindman's liberal biases:

Before he was detailed to the White House, Vindman served in the U.S. Army, where he once received a reprimand from a superior officer for badmouthing and ridiculing America in front of Russian soldiers his unit was training with during a joint 2012 exercise in Germany.

His commanding officer, Army Lt. Col. Jim Hickman, complained that Vindman, then a major, “was apologetic of American culture, laughed about Americans not being educated or worldly and really talked up Obama and globalism to the point of [it being] uncomfortable.”

“Vindman was a partisan Democrat at least as far back as 2012,” Hickman, now retired, asserted. “Do not let the uniform fool you. He is a political activist in uniform.”

Vindman was unreliable and had questionable judgment, according to his own outgoing superior, Tim Morrison, the National Security Council’s senior director for European affairs.

In fact, Morrison viewed Vindman as so untrustworthy that he opted to exclude him from his conversations with William Taylor, the senior US diplomat in Ukraine.

Notice that in these stories, the sources are named, not anonymous....like that "whistleblower."

CNN ignored all of that reporting as it hotly trashed Sen. Blackburn as the screen read "GOP QUESTIONS PATRIOTISM OF PURPLE HEART RECIPIENT." Forgive us if this has a taste of the media's fulsome defense of Sen. John Kerry in 2004, who also disparaged America, after his military service in Vietnam.

This is NOT the approach CNN and other liberal media outlets showed to Lt. Col. Oliver North during the Iran-Contra scandal after he served on the National Security Council. Insulting North was never "beyond the pale."

Wolf Blitzer lectured "In a series of tweets, the senator questioned Lieutenant Colonel Vindman's patriotism. She also made a number of smears and unfounded claims." (This, from the network that routinely compares the president to Hitler and other murderous tyrants.)

Tapper read a loaded statement from Vindman's attorney insisting that his client "sacrificed enormously for our country" and denouncing Blackburn for spreading "slander" in a "testament to cowardice."

Blitzer then turned to CNN analyst Adm. John Kirby and said Blackburn's tweets were "really sickening." Kirby proclaimed "of all the people in this entire sad saga of impeachment, he's the only one that actually has literally bled for his country. And I think he deserves the credit and the credibility that goes along with that."

Gloria Borger denounced Blackburn for a "stunt..it's like, notice me, Mr. President!... and it's just embarrassing for her. And I mean, it's mortifying, honestly. And I think it's just a way to try and get noticed during this trial, when you're supposed to keep your mouth shut."

The obvious point here is that this Trump-trashing veteran of the Obama White House with a Purple Heart sounds like he's just months away from becoming a CNN analyst, like Admiral Kirby. For all we know, he's already been a CNN source. That would explain some of their partisan outrage.