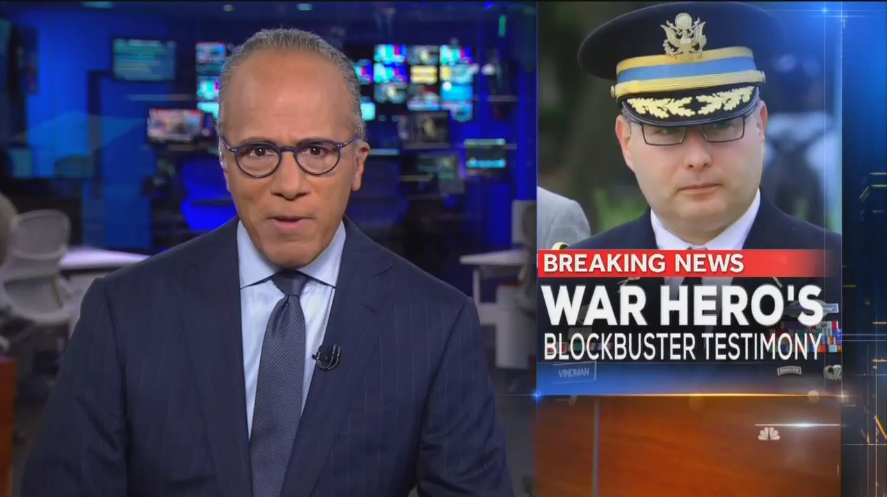 Eddie Scarry at the Washington Examiner makes a great point about how The Washington Post blustered on Christmas Day about how National Security Council staffer Alexander Vindman was "falsely" brutalized by Trump. In the telling of Post reporters (and Russiagate enthusiasts) Greg Miller and Greg Jaffe, "An entire roster of public servants has been disparaged, bullied and in some cases banished for standing in Trump’s path as he sought to pressure Ukraine for political favors, or for testifying about his conduct afterward."

Scarry pointed out this passage:

Vindman — who was born in Ukraine, moved to the United States with his family at age 3 and earned a Purple Heart in the war in Iraq — has been taunted by Trump, cast as disloyal by the president’s allies and falsely accused of plotting with the whistleblower to undermine the president.

Scarry asked: How does the Post know Vindman didn't talk to the "whistleblower"?

Sure, Vindman testified that he didn't know who the whistleblower is, but we shouldn't necessarily believe that — especially not after the televised hearing. Vindman said that he was on the midsummer phone call between Trump and the president of Ukraine and that afterward, he discussed it with two people, one of whom he identified as State Department official George Kent. He said that the other individual was someone in the intelligence community, but when asked who that person was by congressman Devin Nunes, a Republican from California, Vindman refused to answer. When Nunes pressed him, Adam Schiff, who chairs the intelligence committee, blocked the line of questioning, blurting out that "we need to protect the whistleblower" and that there should be "no effort to out the whistleblower."

So in other words, the whistleblower appears to be the guy Vindman spoke with and refused to name. How is it possible that he testified truthfully in this regard?

Just as the Post would deny it's plotting to undermine Trump. Journalists are just safeguarding democracy.

Scarry asked "why would the Washington Post feel such confidence that Vindman really wasn't interested in undermining the president?" That also raises the question: How much does the Post know directly from Vindman and the "whistleblower" that they've hidden through anonymous sourcing?

Anonymous sourcing makes it harder to prove anyone's plotting to undermine anyone. That's why the media love to exploit it.