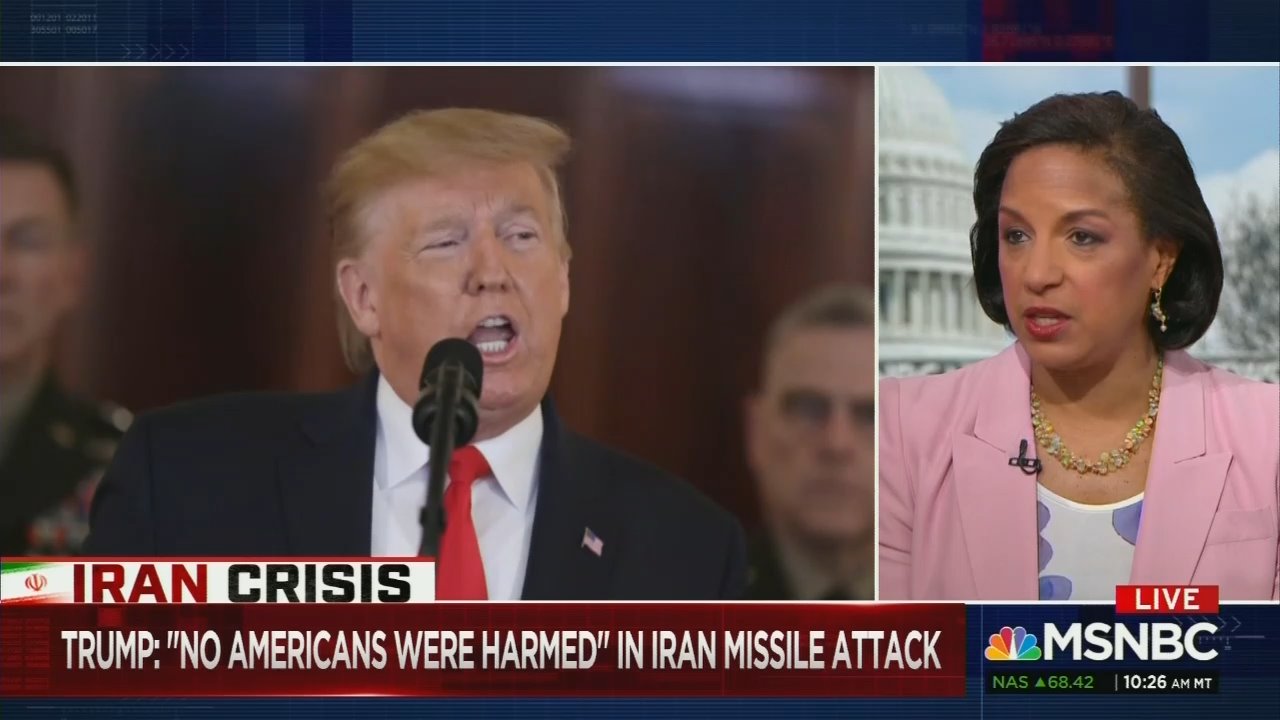 Susan Rice is best known as the top Obama adviser who lied on five different network talk shows in 2012, claiming the attack on the American consulate in Benghazi was caused by a YouTube video. But MSNBC put Rice on the air shortly after President Trump's speech about Iran on Wednesday as a "fact checker."

It's a little silly for MSNBC to complain that Trump "ham-handedly politicized" his speech, and then follow that up with one of the most ham-handed politicians in the Obama White House. Mitchell didn't mention the Benghazi talk-show fiasco as she touted Rice’s “wealth of foreign policy and Oval Office experience.” Mitchell played a clip of Trump saying Obama gave billions to the Iranians in the Iran arms deal, thus funding the missile attacks. They derisively giggled a little.

MITCHELL:  Let's fact-check the $150 billion that went to Iran after the nuclear deal was signed.

The facts about the Iran nuclear deal are that it effectively halted and rolled back Iranian's nuclear program. In the years since the signing of the deal in 2015, up until President Trump's unilateral withdrawal, abandoning our allies against the advice of his advisors, there were no proxy attacks by Iranian proxies on U.S. Personnel in Iraq. There were no efforts by Iran to attack our drones in the Persian Gulf or attack shipping. The nuclear program was under control. There were strict verification and inspections. Everybody including the American intelligence community validated that it was being upheld and our forces and presence in the region was secure.

Rice's boasting is easily nitpicked. Not "everybody" felt Iran was in compliance. It was implemented in January 2016, and by July, conservative Elliott Abrams was charging the Iranians with cheating on the agreement. Israeli prime minister Benjamin Netanyahu unveiled evidence Iran was violating the accord with impunity. To say "everybody validated it" is blatantly false.

Mitchell returned to wanting to "fact check" the 150 billion dollars Obama gave to Iraq. There is no doubt that Obama gave that money. Liberals are merely claiming we were giving the Iranians back their own seized assets from 1979.

But Rice said "That's not America giving Iran 150 million dollars. Quite the contrary!" It was "the most disgraceful kind of lie, of the sort that unfortunately President Trump tells every day."

Ham-handed politicizing. It's what MSNBC does every day.