Feminists demand that men must love feminist movies -- even movies based on classic literature with plucky women in period costumes. On Friday, The New York Times published an opinion piece with the headline:

Men Are Dismissing ‘Little Women.’ What a Surprise.

The rejection of the latest screen adaptation of the beloved novel echoes a long-held sentiment toward women-centered narratives.

Writer Kristy Eldridge presented the case for the prosecution: 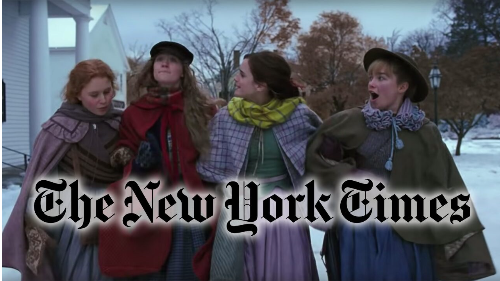 So reads the headline for an article on Vanity Fair’s website this month about the latest screen adaptation of the beloved Louisa May Alcott novel. The film has been lauded by critics and ostensibly possesses many of the qualities awards voters look for: an A-list cast (including Saoirse Ronan, Timothée Chalamet and Meryl Streep); a respected actress-turned-director (Greta Gerwig); and beloved source material.

But so far it has been noticeably underrepresented during awards season — two Golden Globe nominations and zero Screen Actors Guild nods — and Vanity Fair described the audiences at early advance screenings as “overwhelmingly comprised of women.” One of its producers, Amy Pascal, told the magazine she believes many male voters have avoided it because of an “unconscious bias.”

Really? A look at the SAG nominations shows they were very partial to the anti-Fox News film Bombshell, which is at least as women-centered and feminist as Gerwig's umpteenth iteration of Alcott. They nominated Charlize Theron for "Outstanding Performance by a Female Actor" as well as Nicole Kidman and Margot Robbie in supporting roles, and the whole cast for "Outstanding Performance by a Cast in a Motion Picture."

As Eldridge admitted, maybe these voters prefer modern-day feminism over 19th century feminism. After a long exploration of how Alcott faced literary chauvinism in her day, Eldridge admitted that several male film critics have given it enthusiastic reviews, but this article shouldn't have to be written!

Yet that this concern even existed to begin with is disheartening. If many men haven’t wanted to give it a chance because they don’t think it’s meant for them, we still have a way to go in considering all kinds of narratives about women to be deserving of thoughtful attention.

A man can love women without loving chick flicks. They also don't need to obsess over The Bachelor, or adore Taylor Swift music. Liberal journalists always have to find any whiff of discrimination or sexism they can detect. But, as my old colleague and friend Dan Isett observed, "I wonder if the New York Times ran any stories about how women didn't go see Rambo." That's not to say the umpteeenth iteration of Rambo was any good.