Last Sunday, CNN's Brian Stelter complained on Twitter that Fox & Friends responded to the Times and Globe pieces with an on-screen banner, "MEDIA DECLARES TRUMP SHOULD BE IMPEACHED." Stelter fussed: "Who's writing those banners?!" 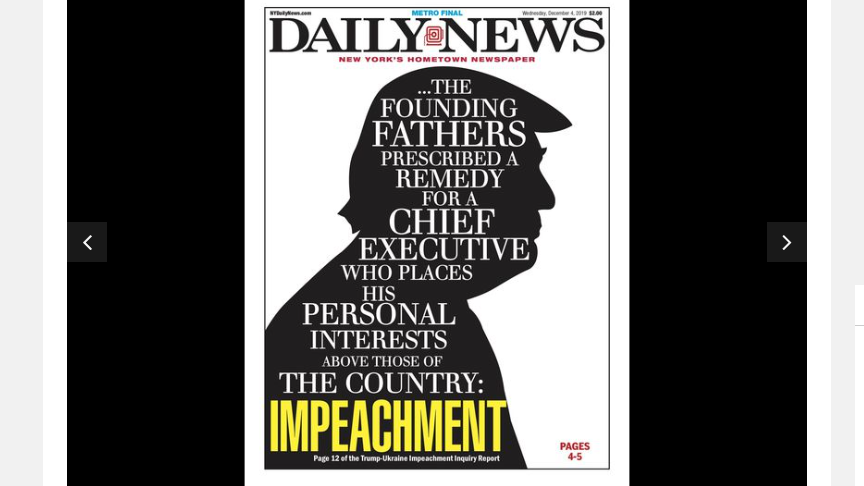 At that point Fox cited The Boston Globe and the Los Angeles Times. Apparently that's not enough "media"...and Stelter tried to argue "Editorial boards -- groups of opinion writers -- typically operate separately from the newsroom and often reflect the views of the newspaper's ownership."

Stelter reported the New York Daily News thumped their tub for Trump's impeachment on their front page on December 4....before he complained about Fox & Friends.

Maybe this trend is not surprising....since we couldn't find a newspaper endorsement of Trump in mid-October 2016. (Eventually there were two, in Jacksonville and Las Vegas.)

As Christian Datoc reported at the Daily Caller, the list of newspaper endorsements of impeaching Trump keeps increasing:

Can Fox say "Media declares Trump should be impeached" yet? It's not surprising, but all of these papers endorsed Hillary Clinton for president last time.

Stelter also noted the Chicago Sun-Times joined the list, "partly to rebuke its cross-town rival," the Chicago Tribune. The Tribune editorial page proclaimed Trump should be censured, but not impeached. (Moderates urged the same position toward Clinton in 1998.)

But a mere censure "would be another gift," the Sun-Times argued. "The president compromised our nation's best interests for pure political self-profit, as baldly as a Chicago alderman holding up a zoning change for a bribe. Trump has brought impeachment upon himself."