If it's Sunday, Chuck Todd is exasperated and yelling at a Republican. This week, the victim was Sen. John Kennedy, Republican of Louisiana. But first, Todd demonstrated his double standard by asking sympathetic questions to Democrats, like this poor-sister question to Sen. Amy Klobuchar (MN):

Let me talk about your race. It seems as if right now everybody is focused on everybody's flaws, all the reasons why none of you can unite the Democratic party, why none of you can do this, and you've got this problem, and this candidate's got that problem. It's only a focus on the warts. Is this damaging long-term? 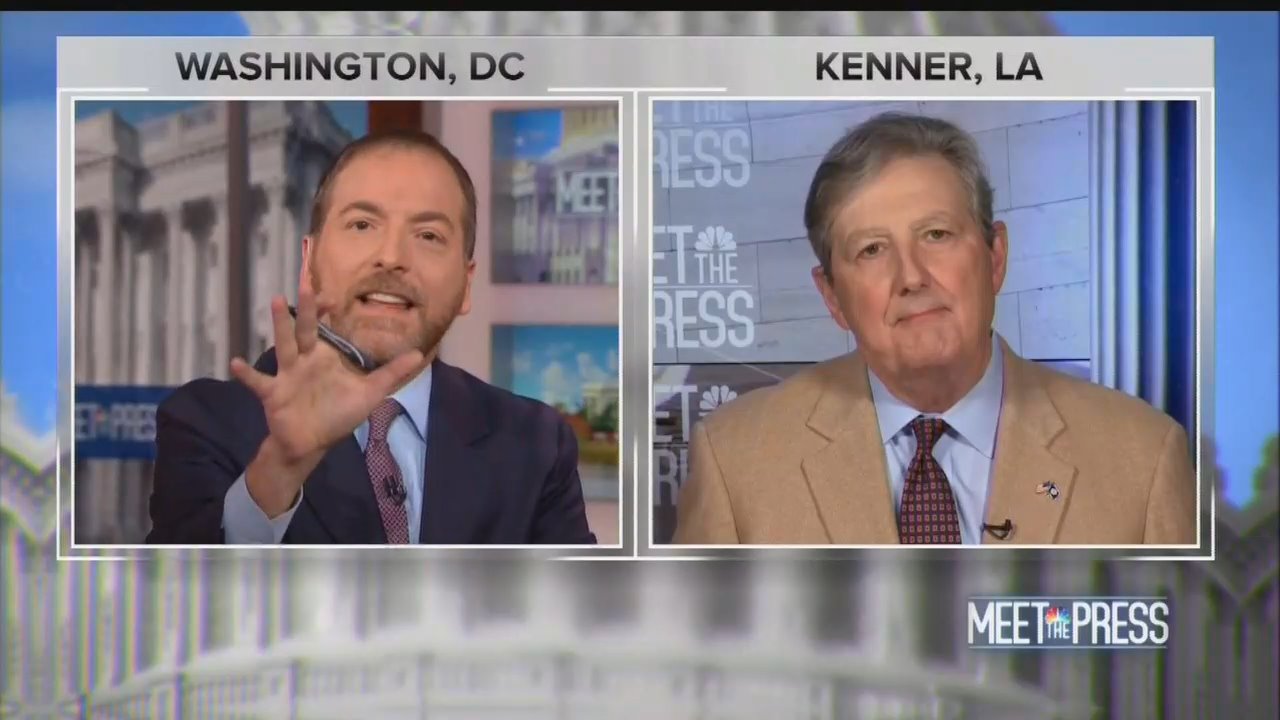 Todd turned to the Republican, seemingly determined to cause long-term damage to the Other Party. First, he insisted Kennedy had to explain what he got wrong in his interview last Sunday with Chris Wallace on Fox, like he was a student in detention.

Then he read a long Kennedy-trashing passage from Washington Post columnist Michael Gerson -- "he no liberal columnist," insisted Todd, suggesting Kennedy had no loyalty "to truth, to honesty, and to the national good."

I think both Russia and Ukraine meddled in the 2016 election. I think it's been well documented in the Financial Times, in Politico, in The Economist, in the Washington Examiner, even on CBS, that the prime minister of Ukraine, the interior minister, the Ukrainian ambassador to the United States, the head of the Ukrainian Anti-Corruption League, all meddled in the election on social media and otherwise.

TODD: When does opinion, when does opinion become fact? Does 17 intelligence services saying it, does every western intelligence ally saying Russia did this? I'm just sort of confused, at what point is it no longer an opinion for you? [Fact check: only four intelligence agencies were involved in the Russiagate probe, not 17.]

Sen. Kennedy acknowledged Russians were meddling, but just added Ukrainians were meddling, too. Todd repeatedly insisted that Kennedy was like a Russian agent for adding these inconvenient truths to the narrative. This was the third Russian-enabler accusation:

TODD: I mean, my goodness, wait a minute, Senator Kennedy, you now have the president of Ukraine saying he actively worked for the Democratic nominee for president. I mean, now come on. I mean, I got to put up -- you realize the only other person selling this argument outside the United States is this man, Vladimir Putin. This is what he said on November 20th: "Thank God nobody is accusing us anymore of interfering in U.S. elections. Now they're accusing Ukraine. Well, let them sort this out among themselves." You just accused a former president of Ukraine. You have done exactly what the Russian operation is trying to get American politicians to do. Are you at all concerned that you've been duped?

KENNEDY: No, because you -- just read the articles. Do you believe The Economist magazine is a reputable journal? It's been around, I think, since 1843...

This feels like a repeat of a long Todd vs. Kennedy squabble on MSNBC's MTP Daily in September. Todd furiously defended Hunter Biden's employment by Ukrainian oil barons as Kennedy shot back: "Do you think they got Hunter Biden's name off Zip Recruiter? I don't. I don't think the American people do either."

PS: MSNBC's Joy Reid liked Chuck's yelling at Kennedy so much she re-ran a piece of it on AM Joy and let Glenn Kirschner repeat the Tool of Russia narrative:

KIRSCHNER: I can't come up with a plausible explanation for all of these elected officials seeming to wanna just turn our government over to Vladimir Putin.