CNN Rages at Media-Killing Meme, But Raved Over Trump-Killing 'Masterpiece'

CNN was among the most outraged critics of a distasteful meme using the extremely distasteful mass-murder scene from the 2015 Kingsman movie, with Donald Trump killing prominent Democrats and the press (logos over the face). CNN's PR account on Twitter demanded everyone in Trump-land must "denounce it immediately in the strongest possible terms." 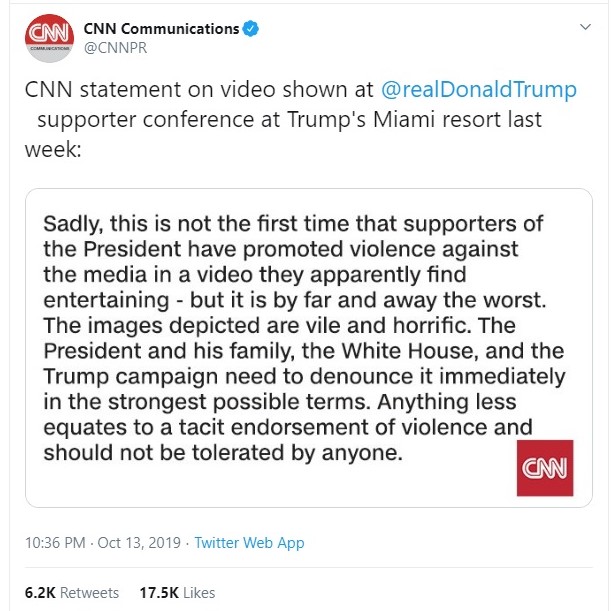 On Monday's New Day, CNN's Brian Stelter insisted "President Trump is responsible ultimately for the kind of climate that allows this kind of hostility and hatred toward journalists and Democrats. He is ultimately the one responsible."

Hostility, and hatred, as opposed to CNN, the 24-7 Sweetness and Light Network. Never a cross word on their lips.

A meme suggesting the mass murder of media people (or outlets) is not funny. But neither are all the angry messages of Trump-haters playing up violence against Donald Trump. CNN hasn't had a consistent record of denouncing those in the "strongest possible terms."

In 2017, CNN Sunday host Fareed Zakaria gave a rave review on Twitter to a Shakespeare play in which the very Trump-like character is stabbed to death: “If you're in NYC, go see Julius Caesar, free in Central Park, brilliantly interpreted for Trump era. A masterpiece.”

CNN.com ran a review by Kate Maltby, a theatre critic from London, who insisted the "right-wing" press was all wrong.

Yet this is not the vicious lynching of a Trump-surrogate that the right-wing press are keen to portray, nor a ritual expression of New York Democrats' bloodlust. Eustis' production may present Trump as a vulgar demagogue -- quelle horreur! -- but it makes crystal clear that assassinating him is the worst possible thing his opponents could do....

If anything, portraying Julius Caesar as Donald Trump is unfair to Caesar. The Caesar of history and of Shakespeare's original, at least, had earned credibility in war, instead of dodging the Vietnam draft....

This Julius Caesar does not glorify Trump's assassination, but it does critique him as a wannabe-emperor. If that's all it takes to get funding pulled, other theaters are going to be very wary of staging work that engages with the nation's President. And that has a chilling effect of freedom of expression. There is nothing less American than an America in which artists cannot speak truth to power.

Back in 2006, CNN's morning show promoted the film Death of a President, which imagined the assassination of George W. Bush:

MILES O’BRIEN, anchor: Some of these theaters that have said no to your film, in the end all the buzz surrounding this, I guess that might be good for business, huh?

GABRIEL RANGE: Well, I think the distributor, New Market, are keen to -- they've got the film out in a lot of theaters. And they're very confident that it will reach a wide audience. So, I hope the fact you and I are talking about it today will mean that a lot of people will want to see the film. I would say, it's not what you think. Judge it for yourself.

CNN quite obviously thinks any suggestion of violence against journalists is especially "vile and horrific," because journalists, like artists, "speak truth to power." But they also demonstrate they don't feel the same ardor about "artists" playing around with death and Trump.