The Washington Post’s sensitivity toward Hillary Clinton – and their liberal-Democratic belief that the women’s vote will put her over the top – came together on the front page Friday with a whole story devoted to a T-shirt vendor on the trail that sells a T-shirt that says “Trump That B*tch.” [Asterisk is mine.]

Obviously, Post reporter Jenna Johnson and her editors in the politics section thinks this represents a larger hatred of the Clintons, and of women:

At most of Trump’s rallies, there is a palpable hatred of Clinton in the air, and some of Trump’s strongest applause lines come when he attacks the presumptive Democratic presidential nominee, calling her “crooked” and accusing her of playing “the woman’s card.”

But many of his fans have chosen a different nickname for her — one starting with a “b” and rhyming with “witch.”

The word is often shouted from the audience as Trump attacks her, murmured in pre-rally conversations and typed on Twitter. It appears on a popular button sold by vendors at many rallies: “Life’s a b----, don’t vote for one.” And, most prominently, it is on those white T-shirts, created by the Ohio-based Street Talk Tees and sold at nearly all of Trump’s rallies.

Although some women may casually use the term among friends or as a sign of empowerment, the b-word is still widely considered a particularly aggressive and demeaning insult when hurled at a woman, especially if it comes from a man. Many supporters of Clinton — poised to become the nation’s first female presidential nominee — feel the word is loaded and offensive. Clinton’s campaign declined to comment.

The vendor of these shirts, Street Talk Tees, usually specializes in F-bomb shirts. It’s not a classy outfit. But a conservative or Republican reader might wonder if hateful anti-Trump shirts are ever worn at Hillary Clinton or Bernie Sanders rallies, or vendors are hawking them. Let’s nominate a few front-pageworthy T-shirt designs that might be more offensive than the B-word, since they’re about Donald Trump being dead.

On June 9, the leftist blog Wonkette posted a blog titled “Oh Whoops We Just Forced You To Buy This Shirt Of Hillary Clinton Cutting Off Trump’s Head.” The Washington Post has written plenty about Wonkette over the years, but has yet to notice this design! Rebecca Schoenkopf cited an Old Testament tale (book of Judith, chapter 13) as inspiration: 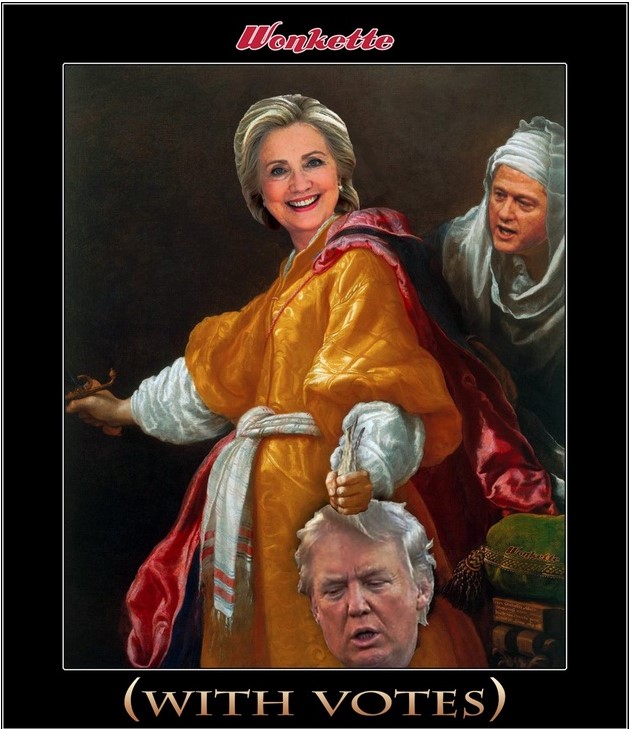 Do you know the story of Judith and Holofernes? Judith was a rad Jewish woman, and Holofernes was a … Roman? general who wanted to rape her. She was like “cool, Holofernes, I will just come to your tent and attend to your boner, no problem, awesome Jewish chick coming at ya,” and then she CUT OFF HIS HEAD.

Isn’t that a good story?

She gushed their beheading design comes “on men’s shirts and women’s shirts and tote bags and coffee cups and all the other places Redbubble lets us put original photoshops.” Don't miss that they also sell "Hillary of Arc" T-shirts! That might be seen on a Post reporter after hours.

Then there’s the Noisey music blog at Vice.com celebrating a punk band: “Municipal Waste Explain Why They Made a Shirt of Donald Trump Blowing His Brains Out.” 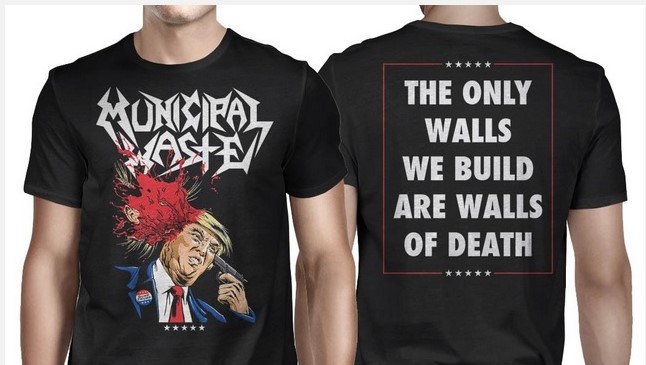 NOISEY: It's something of a Municipal Waste tradition to use shirt designs featuring various shitty people getting their just desserts. Trump is definitely one of the shittiest people going right now, so why did you decide that now was the right time for this shirt, instead of later this year (or earlier this past year when he announced his campaign)?

TONY FORESTA of Municipal Waste: We haven't really had any shows for a while. We've basically been inactive and working on our other bands, and slowly writing a new record over the past two years. There wasn't really any point in making any new shirt designs if we aren't doing any tours or anything. We just printed these for this LA show on Saturday, and didn't realize it was going to be such a thing. We're a bit shocked actually.

NOISEY: How have people been reacting to it? Is it a big seller?

FORESTA: It's kind of crazy. We're making so much money off of it that we might actually turn into Republicans! Okay, not really ,but it's selling pretty good. A lot of people don't like that guy. I've been reading some of the comments from people that are "shocked" that we would say something bad about Trump. We talked about killing George Bush on our first freaking album! People need to read the lyrics of the bands they listen to before they get butthurt about the things they have to say.

To go back to the B-word label of offense, you can find a lot of "Tuck Frump" T-shirts, an "Assclown" T-shirt with Trump's face in clown makeup, and shirts with the words "Xenophobe" or "Imbecile" or "Sociopath" over Trump's face, as well as one of Trump and Vladimir Putin making out. Our not-so-Trumpy staff laughed at the one with Trump as the killer shark from Jaws with the GOP elephant logo floating above.