Lyndsey Fifield of Heritage pointed out on Sunday that NPR Public Editor (or Ombudsman) Elizabeth Jensen proclaimed on Friday night that NPR allowed misinformation on their airwaves. The culprit was Rep. Jim Banks (R-Indiana), who said Adam Schiff lied about he and his staff's contacts with the vaunted "whistleblower" that's central to the Democrat impeachment effort. But wait, The Washington Post gave Schiff "Four Pinocchios" for that claim, which would suggest Schiff....lied.

Is NPR saying the Washington Post pushed misinformation? Are they that in love with Schiff? (This visual valentine is an actual NPR photo they published this year.) 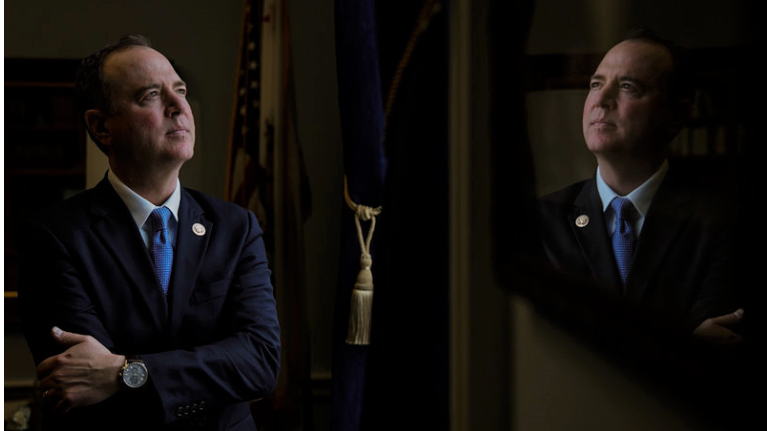 Banks also incorrectly characterized a New York Times story about Adam Schiff, the California Democrat who chairs the House Intelligence Committee, incorrectly asserting that Schiff had "lied" about his role in the whistleblower complaint that sparked the impeachment drive. (I'm not going to repeat the entire incorrect statement.) Martin didn't challenge Banks' statements about Schiff during the live interview.

Martin told me that only after the interview aired did she become aware that Schiff's office was refuting claims that he met the whistleblower before the complaint was filed. With the input of Terence Samuel, NPR's deputy managing editor, Martin read a couple of lines at the very end of the interview for its rebroadcast across the evening, that said in part, "We feel we must note that Congressman Banks did not accurately describe The New York Times' reporting about Congressman Schiff and the whistleblower's complaint." This was not labelled as a "correction" or a "clarification" but simply was added to the interview, in what is called a "back-announce."

That added paragraph was absolutely necessary given the misinformation Banks had given listeners. Samuel told me, "I owed it to the listeners to correct that very specific inaccuracy."

Jensen does link to the segment on Wednesday's All Things Considered, and this is what Banks said: "The New York Times story coming out that all along, Adam Schiff knew about the whistleblower. The whistleblower came to Chairman Schiff and to the intelligence committee even though he lied about it and said that he'd never spoken directly to the whistleblower. We now know that he was part of orchestrating the whistleblower account to begin with..."

Liberals will push back on the notion the whistleblower is being "orchestrated," but he's the center of an attempt to impeach and remove the president, and we don't even know who on Earth he is.

Jensen admitted NPR's interviewing twice as many Democrats as Republicans, then blamed the Republicans:

Since the impeachment story began, the Public Editor's office has been receiving regular complaints that NPR's coverage has been heavily tilted toward Democratic viewpoints. There's a reason listeners might perceive that: Republicans have been ducking interviews with NPR. By our count, through Thursday evening, NPR's two newsmagazines and the midday Here & Now had interviewed 22 Democrats (current politicians, former administration people and others with a partisan viewpoint) to 11 Republicans.

NPR claimed it wasn't for lack of trying to get Republicans to submit to interviews. But they can't seem to notice Republicans are questioned much more harshly. A recent interview with Rep. Andy Harris had the same accusatory tone of "how can you tolerate what Trump's doing?"

Meanwhile, NPR interviewed Adam Schiff hours after the congressman made up a bunch of stuff that the president never said to the president of Ukraine in widely broadast live hearing coverage: "And I’m going to say this only seven times, so you better listen good. I want you to make up dirt on my political opponent, understand? Lots of dirt, on this and on that." NPR host Ari Shapiro interviewed him for almost seven minutes, and never questioned him on that misinformation.

As often happens, it came up instead in an interview that night with Rep. Tim Burchett (R-Tenn.), who brought it up without being asked about it on NPR...and the NPR interviewer quickly changed the subject.