PBS, NPR Interview Schiff, Fail to Ask About His False 'Parody' of Trump 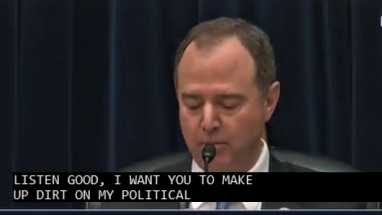 Rush Limbaugh and conservative Twitter made a big deal on Thursday out of Rep. Adam Schiff wildly mischaracterizing President Trump's phone call with the president of Ukraine: "And I’m going to say this only seven times, so you better listen good. I want you to make up dirt on my political opponent, understand? Lots of dirt, on this and on that." None of that was even hinted at in the transcript of the call. ABC, CBS, and NBC just skipped over the fakery on Thursday night.

On NPR's All Things Considered, anchor Ari Shapiro interviewed Schiff for almost seven minutes, and never brought it up. Once again, so much for considering All Things. Instead, Shapiro began by underlining what the Democrats wanted to underline:

SHAPIRO: Let me first ask you about one big revelation in the whistleblower complaint, which is that after President Trump asked Ukraine's president to look into the Biden family, the White House locked down all records of the call, putting them into a separate electronic system to handle especially sensitive classified information. Have you ever heard of a White House doing something like that?

SCHIFF: No, I haven't. And I can't imagine what circumstance would make that appropriate.

Is it appropriate to make up stuff the president says? NPR doesn't seem to care.

Shapiro did ask Schiff "How far are you going to go? How deep are you going to dig? I mean, Republicans are going to accuse you of digging forever until you find something; Democratic activists want you to do this quickly. How will you know when the investigation is over?" Schiff said "the smoking gun is already out" in the phone transcript.

Schiff could only say "Well, it has been an administration that has stonewalled to a degree which none other has before, until this week."

On the PBS NewsHour, anchor Judy Woodruff (Powderpuff) was softer than Shapiro, a real stenographer to Democrats (just like Chris Murphy the night before). There was no parody question. "I began by asking if today's testimony gives him a better understanding of how the Trump administration handled the whistle-blower's complaint against the president," she said, without showing her question, which was followed by these softballs:

-- So do you have evidence that this was all suppressed deliberately to protect the president?

-- And subpoena individuals, if necessary?

-- Now that you have been named head of House of Representatives' move to impeachment insofar as Ukraine is involved, can you give us an understanding of how that moves forward? Is that now going to be the main focus of the impeachment investigation?

-- And, finally, do you believe that any impeachment effort has to be bipartisan in order to be credible?

That's six questions, adding up to 133 words. Then Woodruff interviewed Trump aide Kellyanne Conway, and started fighting with her. One "question" or rebuttal was 150 words!

PBS cut its teeth on running live coverage of the Watergate hearings, live during the day and repeated at night. They are still that network today, assisting the Democrats in their prosecutions with taxpayer funding.