On Monday, PolitiFact editor Angie Drobnic Holan wrote an article expressing her frustration that Sen. Ted Cruz would dare to mock her website on Twitter as “a wholly-owned subsidary of the DNC.” 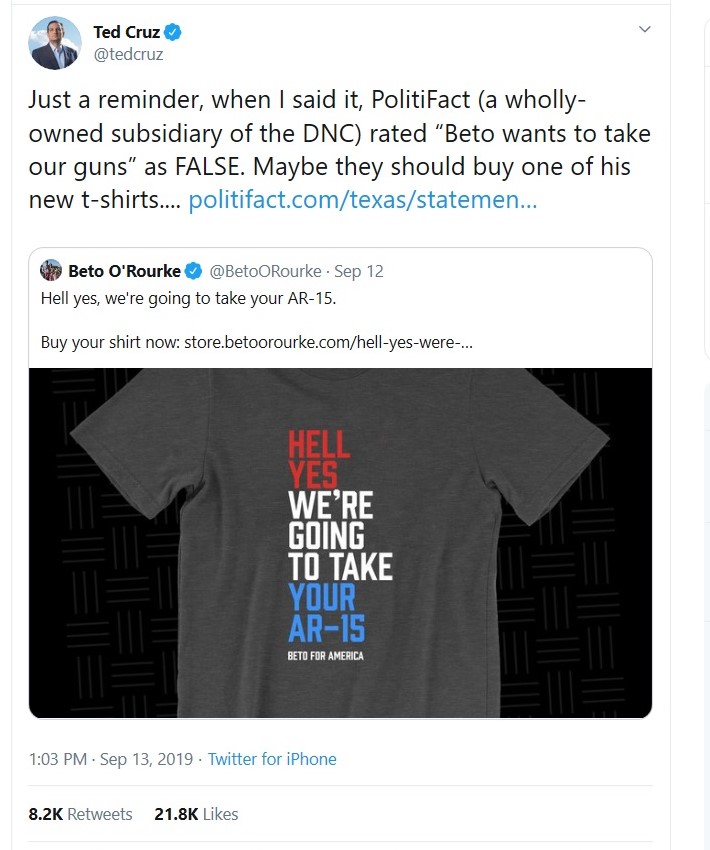 Holan protested: “PolitiFact Texas fact-checked Cruz in March 2018 when he said that O’Rourke wants 'open borders and wants to take our guns.’ At the time, O’Rourke did not support either goal. On guns, he wanted to forbid the sale of new assault rifles but did not support mandatory gun buyback programs. ”

That might be defensible....but not definitive. The problem with “fact checkers” is they don’t seem to let (ahem, Republican) candidates predict how the (Democrat) opponent will govern once elected. Flip-flops are quite common, like in Beto’s case – although he wasn’t elected, but is now running for president.

Beto’s “conversion” (or strategic re-branding for a national audience) means on one level that Cruz ended up being right all along about the Beto of the future.

PolitiFact seeks to present true facts, unaffected by agenda or biases. The reason we publish findings is to give citizens the information they need to govern themselves in a democracy.

Now, let’s underline just how badly PolitiFact flunks the test of being the “independent,” “nonpartisan” fact-checker of “Democrats and Republicans alike.” The fact-checking of the two parties is not at all alike.

In February, I noted that in 2017-18, PolitiFact fact-checked President Trump 25 times more often than Nancy Pelosi and Chuck Schumer, the Democrat leaders in Congress...combined (297 to 21). He had more "Pants on Fire" fact checks (33) than all their fact checks combined.

But let’s look at Senator Cruz’s PolitiFact page vs. Sen. Elizabeth Warren’s. In that same blog, I reported that both Cruz and Warren were elected in 2012, but “Cruz was assessed for truth on 135 occasions by PolitiFact through 2018, but Warren? Only five.” Cruz ran for president, so that’s a partial explanation. Now Warren is running.

Even Ted Cruz's dad has one Mostly False. If they don’t want to look like a “wholly owned subsidiary,” maybe they should try to achieve a less embarrassing disparity than this.

PolitiFact tweeted today to dispute that they are “a wholly owned subsidiary of the DNC.” Of course, they didn’t change their underlying partisan ruling. Methinks they doth protest too much. https://t.co/FrXJ1gGDhk pic.twitter.com/DmCxwdMmM2