The "fact checkers" at Snopes.com are fervent and incessant defenders of "The Squad," especially Ilhan Omar and Alexandria Ocasio-Cortez. On September 13, Bethania Palma tagged several pro-Trump tweets as "FALSE" based on something AOC said on tape....five months ago. This was her headline:

Did AOC Say the Public Shouldn't See 9/11 Photos Because They're 'Triggering'?

Attributing questionable quotes to U.S. Rep. Alexandria Ocasio-Cortez is a preoccupation for some people.

On April 11, 2019, the New York Post mocked Ilhan Omar's flippant statement at a CAIR fundraiser that "some people did something" on 9/11 with a photo of a smoldering World Trade Center and the words "Here's your something. 2,977 people dead by terrorism."

Notice that Snopes didn't rule this was a "Mixture" of truth and falsehood, or even "Mostly False," with a smidgen of accuracy. This was an April video tweet that was dragged out, from Matt Batzel of AmericanMajority.com:

.@AOC thinks the public shouldn’t see photos of September 11 because they are “triggering” pic.twitter.com/tFPMovi8Wm #maga

Palma helpfully reproduces the transcript of these remarks, where she said 9/11 photos trigger people, and incite violence against Progressive Women of Color:

Printing on the front page to circulate all around New York City an image that is incredibly upsetting and triggering for New Yorkers that were actually there, and were actually in the radius, that woke up one morning or were in their schools and didn’t know if they were going to see their parents at the end of the day — to elicit such an image for such a transparently and politically-motivated attack on Ilhan — this is, we are getting to the level where this is an incitement of violence against progressive women of color. And if they can’t figure out how to get it back to policy, we need to call it out for what it is. Because this is not normal, and this is not a normal level of political debate or rhetoric. As wild as it can get sometimes, this is something beyond what is normal.

So, in other words, AOC was shaming the New York Post for "triggering" New Yorkers with 9/11 images, but it's "false" to imply she said that "the public" shouldn't see the photos. They just shouldn't see them packaged in a feisty tabloid with mean words on them.

People add aggressive spin to people's quotes all the time. But Snopes puts the hammer down on this as "False"....and then says Joe Biden completely mangling a military-medal story is "Not False."

Ocasio-Cortez was responding to the cover of the New York Post on April 11, 2019, which was also criticized by others when it was published for being incendiary and displaying anti-Muslim bigotry. She was not stating that the public should not view images from the terrorist attacks. We thus rate this claim “False.”

Snopes did find a September tweet to complain about as well, from "CHIZMAGA," who wrote "AOC says remembering the 9/11 attacks is an incitement of violence against Ilhan Omar and other Progressive women of color..." 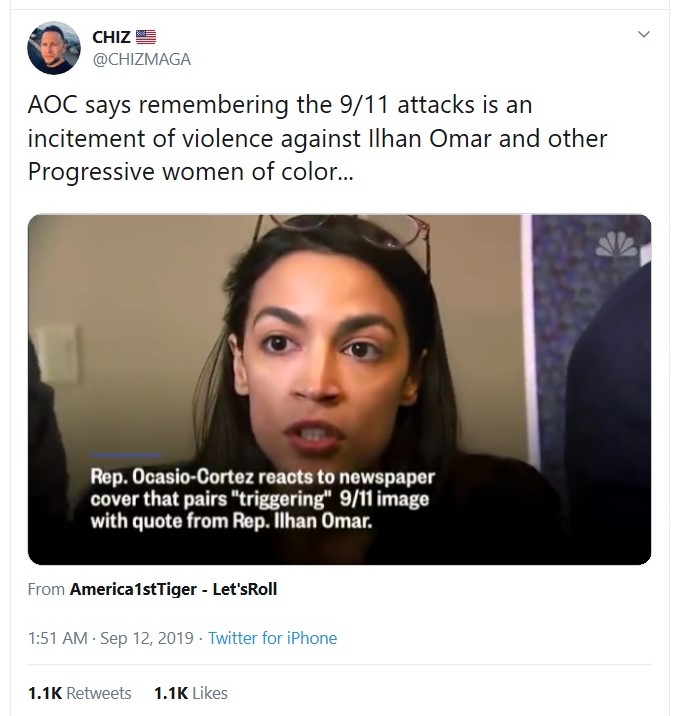 "Remembering" is the only word Snopes can criticize here.

Notice the NBC video he used carried this summary: "Rep. Ocasio-Cortez reacts to newspaper cover that pairs 'triggering' 9/11 image with quote from Rep. Ilhan Omar." Snopes didn't object to that. In other words, it's an offense to use "triggering" images....when you're criticizing "Progressive women of color."