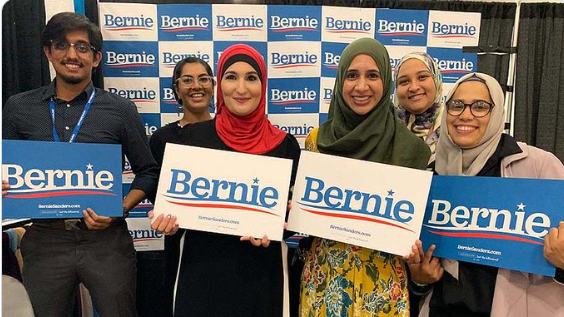 When it comes to President Trump, the networks leap on anything where he can be associated with neo-Nazis and anti-Semites like David Duke, and demand he denounce them repeatedly. But the networks have been silent for nearly a week on Sen. Bernie Sanders announcing he's been endorsed by anti-Semitic radical activist Linda Sarsour, who has refused to disassociate herself with the Rev. Louis Farrakhan, who calls Jews "termites."

As often occurs, only Fox News has reported this news and analyzed it. Even The New York Times and The Washington Post skipped this news.

The Daily Caller reported Sanders tweeted remarks Sarsour made in a video that went viral: “I would be so proud to win, but also to make history and elect the first Jewish American president this country has ever seen and for his name to be Bernard Sanders.”

In the video, Sarsour promised that as president Sanders would conduct “a foreign policy that sees Palestinians as deserving of human rights and self-determination.”

"I would be so proud to win, but also to make history and elect the first Jewish American president this country has ever seen and for his name to be Bernard Sanders." –@lsarsour pic.twitter.com/INPRlvmMur

Hiring Sarsour as a surrogate sets Sanders apart from the Democrat Party establishment. Back in January, the Democratic National Committee disavowed Sarsour’s “Women’s March” organization, alongside other liberal groups such as the NARAL Pro-Choice America, the Human Rights Campaign, and the Southern Poverty Law Center, who will no longer associate themselves with Sarsour.

On CNN.com on September 1, liberal Daily Beast contributor touted Sanders impressing the Muslims: "The star of the annual Muslim convention was a Jewish man from Brooklyn." The Islamic Society of North America (ISNA) describes Sarsour as "co-chair of the Women’s March on Washington, which advocated for just legislation and policies regarding human rights and other issues in the largest single-day demonstration in U.S. history." Obeidallah gushed:

Sanders also did something not often heard from mainstream politicians -- and that's speak of Palestinians as human beings....

[S]ince 2016, Sanders has also been outspoken on issues that have impacted the Muslim community, including Trump's travel ban, which Sanders slammed as "a racist and anti-Islamic attempt to divide us up." At Saturday's event, he renewed his commitment to rescind that measure if elected president. He also added, "We must speak out at hate crimes and violence targeted at the Muslim community and call it what it is: domestic terrorism," generating even more applause for the 2020 presidential candidate.

Bernie's team posted the speech on YouTube. It doesn't feel like Bernie gets as raucous a reception as Obeidallah suggested: