Chuck Todd: 'Efforts to Target Journalists' Are Like Russia and China

Journalists keep demonstrating that they believe they are above criticism. Any effort to criticize their reporting or do any investigative digging into their lives is somehow equated to dictatorial regimes. This seems odd. If you are not allowed the freedom to criticize the press, who is encouraging an authoritarian regime?

On Tuesday's MTP Daily, MSNBC host Chuck Todd uncorked an angry "I Am Obsessed" commentary about an Axios report that Trump backers are organizing a campaign to criticize national journalists. Todd went into the ad break promising he would address "the very dark road that supporters of the Trump administration seem ready to go down, and why we absolutely must shine a light on it." When he returned, Todd warned Team Trump dared to take on "the free press, specifically reporters and editors at The New York Times, The Washington Post and other news outlets including this one."

CHUCK TODD: Axios says, quote, "the prospectus for the new project says it is 'targeting the people producing the news'," unquote. Targeting. Let's not mince words here. The president's supporters are developing a financial framework designed specifically to target journalists. The president makes a lot of political hay by discrediting the press. In fact, Lesley Stahl of 60 Minutes says he told her why.

LESLEY STAHL: He said, "You know why I do it? I do it to discredit you all, and demean you all, so when you write negative stories about me, no one will believe you."

TODD: Every once in a while, a moment of honesty from the president. That's serious. But if it is not serious enough for you, consider this. Remember this man? His name is Cesar Sayoc. He was sentenced just last month for mailing homemade pipe bombs to both prominent Democrats and several media figures that he considered to be enemies of President Trump.

Sayoc's lawyers say he is, quote, "a super fan who drew inspiration from President Trump." And Sayoc's campaign of terror happened before there was an organized effort by the president's allies to target, defame, and character-assassinate journalists.

Sigh, there they go again.

Dear Chuck: If you want to dig out old stories of homicidal fans, please recall James Hodgkinson, who shot up a softball field full of Republican senators and congressmen, who said he loved The Rachel Maddow Show....on MSNBC. "One of my favorite TV shows," he wrote in a letter to the editor. If connecting dots between Hodgkinson and Maddow seems unfair, then consider the same when someone tries to connect Sayoc and any criticism of the liberal media.

Then came the offending part about smelling dictatorship when they get criticized:

Organized efforts to target journalists should not happen in America. Some people love the president`s attacks on the media. Some say that we should all lighten up, that it is all in good fun, or that the press deserves to be targeted.

This is not fun, and it is not funny. And the press does not deserve it. Targeting journalists is not American, and you are targeting fellow Americans, by the way. And the American president, who's supposed to uphold the Constitution should be saying so. Not necessarily encouraging this business. 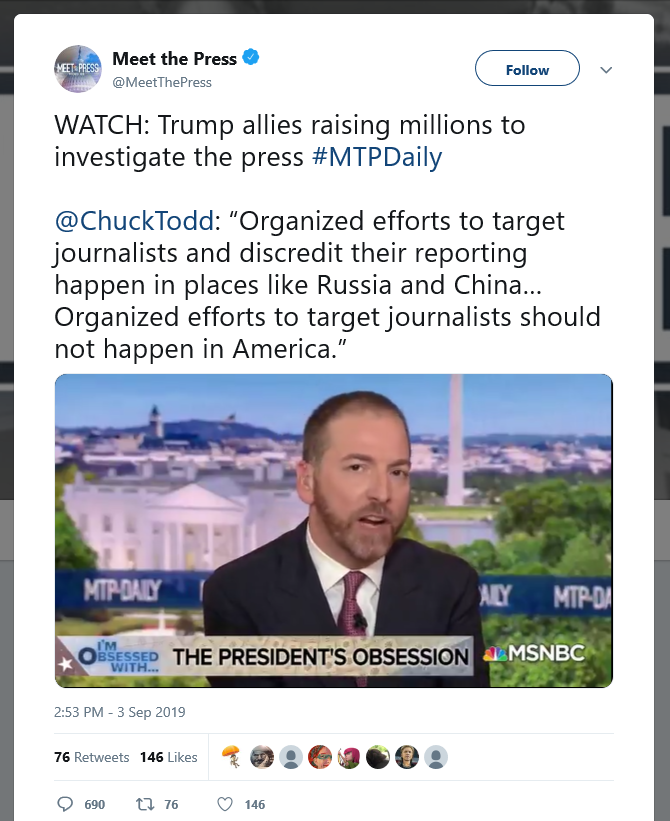