The liberal media's reliable "rock star" metaphors are breaking out for the 2020 campaign. In Sunday's Washington Post, theatre critic Peter Marks witnessed Elizabeth Warren speaking in Tempe, Arizona and professed to be "moved," declaring Warren the "Springsteen of campaign 2020." 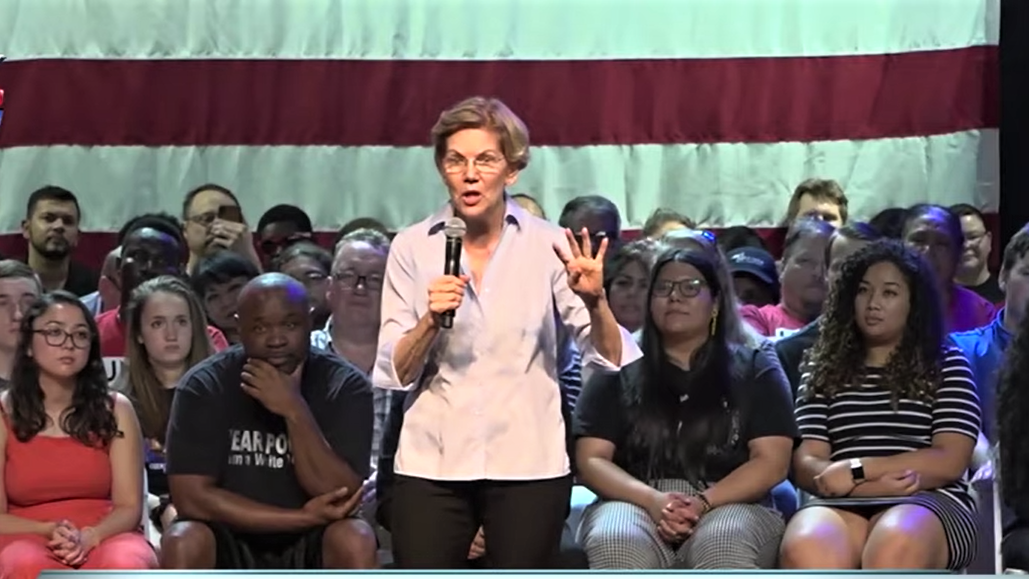 Warren has a fully evolved performance style, one that binds her roll-up-her-sleeves biography powerfully and fluidly to her average, working person’s philosophy. In a grittily poetic way, her spiel is akin to that of a folksy troubadour: She is the Springsteen of campaign 2020.

The Marquee, a venue that books supergroups like Angels & Airwaves and tribute bands such as the Iron Maidens, seemed an ideal place for this other brand of rock star.

Marks claimed Warren had she had a Shakespearean "command of the occasion that might have Julius Caesar's Marc Antony taking notes...the sense of drama Warren radiates replicates the momentum of an actor at the climactic point of a play....the sights and sounds of her presentation deliver the centrifugal emotional force of a potent soliloquy.'

The theatre critic wrote about Warren's "seductive attributes" as a "great actor."

Warren’s Tempe appearance was the first time in my travels as a theater critic on the 2020 campaign trail in which I was moved by a politician’s oratory, and I could feel that I wasn’t the only one. Warren’s team seated about 120 people on the venue’s stage to cheer her on, and one exuberant young man in the first row was clapping so ferociously, I thought his hands would bleed.

That kind of enthusiasm is difficult to manufacture. In this hall, it came across as genuine, in part because the speaker seemed to be seeking that kind of intensity. One of the most seductive attributes of great actors is that they create the impression they are giving you more of themselves — and asking you, as an audience, to give them more in return.

A Warren performance is a polished act of seduction.

Marks was so caught up in the performance he wasn't checking for facts. It's not surprising that he skipped over that whole "Pow Wow Chow" stuff with the pretending to be Cherokee for decades, but he did shamelessly suggest "Her résumé certainly offers some clues to her deftness with an audience: Her commercial law and bankruptcy courses at Harvard Law School, where she was a full professor before being elected in 2012 to the U.S. Senate from Massachusetts, were routinely SRO [Standing Room Only]."

He concluded with how effectively Warren told a sad story about her father having a "massive heart attack" and "he couldn't work for a long, long time." So her mom saved the family's house, getting a "minimum-wage job full time, answering phones. That minimum-wage job saved our house, and more importantly, saved our family.” Marks quoted:

You couldn’t hear the rest of her words, the cheers were so loud. But you didn’t have to hear them because the candidate and her audience were as one.

Most had come, after all, not to bury Warren, but to praise her.

That would include the Post. In January, Post "Fact Checker" Glenn Kessler investigated Warren's claim and found that while that claim could have been true, it appeared that according to her own memoir, Warren's father apparently worked after his heart attack as well, so they didn't only live on a minimum-wage income. Kessler was told  "the Warren campaign said it did not know how long her father did not have a job."

It starts sounding like the old "family lore" is being elastically employed once again.