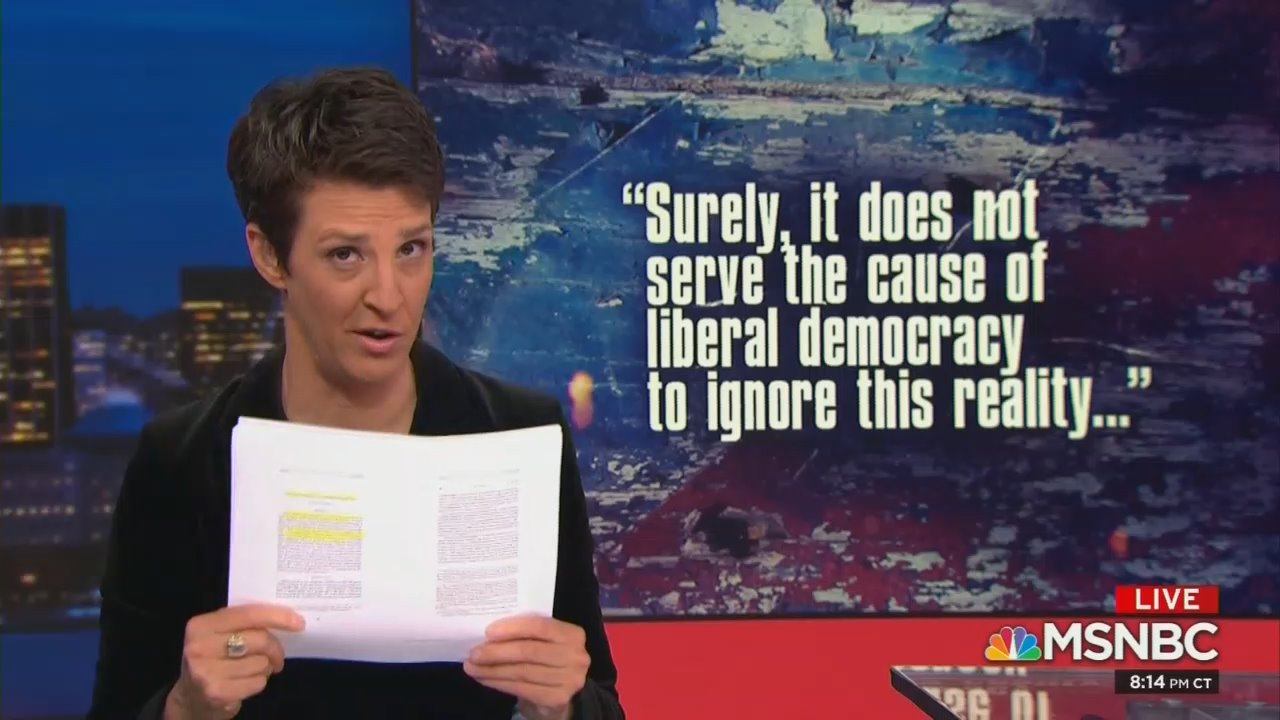 Ed Whelan at National Review objected on Friday to a Rachel Maddow segment on MSNBC Thursday night strongly implying that Trump judicial nominee Steven Menashi is a white nationalist based on a paper he wrote on "Ethnonationalism and Liberal Democracy." Menashi was writing about Israel -- and yet the word "Israel" never passed Maddow's lips. Wrote Whelan:

Menashi’s specific purpose in the article is to refute claims that “Israel’s particularistic identity—its desire to serve as a homeland for the Jewish people—contradicts principles of universalism and equality upon which liberal democracy supposedly rests.” In fact, argues Menashi, “[p]articularistic nationalism and liberal democracy … emerged together at the same historical moment and persisted in symbiosis.”

In a lengthy segment on MSNBC last night, Rachel Maddow grossly distorts Menashi’s argument and tries to twist it into “a high-brow argument for racial purity.” She falsely claims that Menashi argues “how definitely democracy can’t work unless the country is defined by a unifying race.”

But Menashi’s argument about national identity is clearly not about “racial purity” or a “unifying race.” Indeed, the fact that Israelis from Ethiopia are black makes it impossible to take seriously the claim that Menashi is making a case for “racial purity.” Menashi further states that it “is not even clear … that Israel’s national identity can even be described as ‘ethnic’” (in a narrow sense of that concept), as Israeli Jews come from “Argentina, Ethiopia, Germany, Morocco, Russia, and Yemen.”

Listen to Maddow, and you would think Menashi is writing about some racially pure Caucasian utopia:

Oh, yes, you are. He gets right to it at the end. Quote: "Self-government requires a political partnership in which individuals are willing and able to regard one another as equal members of a political community. Democratic self-government depends on national fellow-feeling, the capacity of citizens to identify with each other...Ethnic ties provide the groundwork for that social trust and political solidarity."

And by national community, yes, he's talking about everybody having the same ethnicity.

Maddow poses like she's a great social thinker, but she's mangling this article like a fourth-grader marking up a book with crayons. She's taking generic phrases and turning them into some kind of Klan cartoon.

Menashi was talking about the imperatives of human equality and liberal democracy, meeting with heterogeneity [page 120]:  "People face the reality of difference; there are not only the distinctions of ethnicity, sex, religion, and so on, but also each individual’s particular attributes. People become equal through a mutual decision to disregard such differences in the distribution of political rights. In this way, human equality is the product of liberal democracy rather than its source." [Italics in the original.]

She skipped over paragraphs of Menashi's text to mangle the end about "national community." Here's the text right before the last two sentences she quoted:

Identification with a particular national group is a commonplace of liberal democracy.  As the experience of Israel illustrates, the achievement of human rights depends on national self-determination.  Liberal democracies implement laws of return, promote the welfare of co-ethnics living abroad, and maintain political ties to ethnonational communities living in diaspora.  As globalization disrupts the coincidence of ethnic demography and political boundaries,

[and here she jumps in] the ethnonational identification of liberal democratic states is becoming more, not less, significant. Liberal democracy requires a national community if it is to become more than an ineffectual abstraction.

Now back to Maddow's funhouse mirrors:

MADDOW:I mean, this is the law review/academic wordy bird argument that you can't really have a country. At least you can't have a country that works if you've got all sorts of different people in it. "Surely, it does not serve the cause of liberal democracy to ignore this reality."

That's how you know this is a highbrow argument for racial purity in the nation-state when they say things like surely, everyone must admit this. Don't you just feel it in your gut?

The author of this slightly blood-curdling, very serious law review article is named Steven Menashi. I think how you say it. The reason you need to know it is because Donald Trump just nominated him to be a federal appeals court judge. Just nominated him to sit on the Second Circuit Court of Appeals, which is the federal appeals court that covers New York state and other parts of the Northeast.

And you might wonder how the Trump administration finds the academic drum major for ethnonationalism to become a federal appeals court nominee, one level below the U.S. Supreme Court. I tend to think that in academia and politics, these people on this fringe of racial thinking, they tend to find each other like magnets and iron filings do.

What's curdling in this report is Maddow's intellectual dishonesty. If she really wanted to question Menashi's theories, she would first have to seriously engage them, and not rip them out of context. MSNBC is no intellectual salon....and it's a bit tiresome to repeat it, but let's repeat: The Al Sharpton Network shouldn't lecture about "people on this fringe of racial thinking."