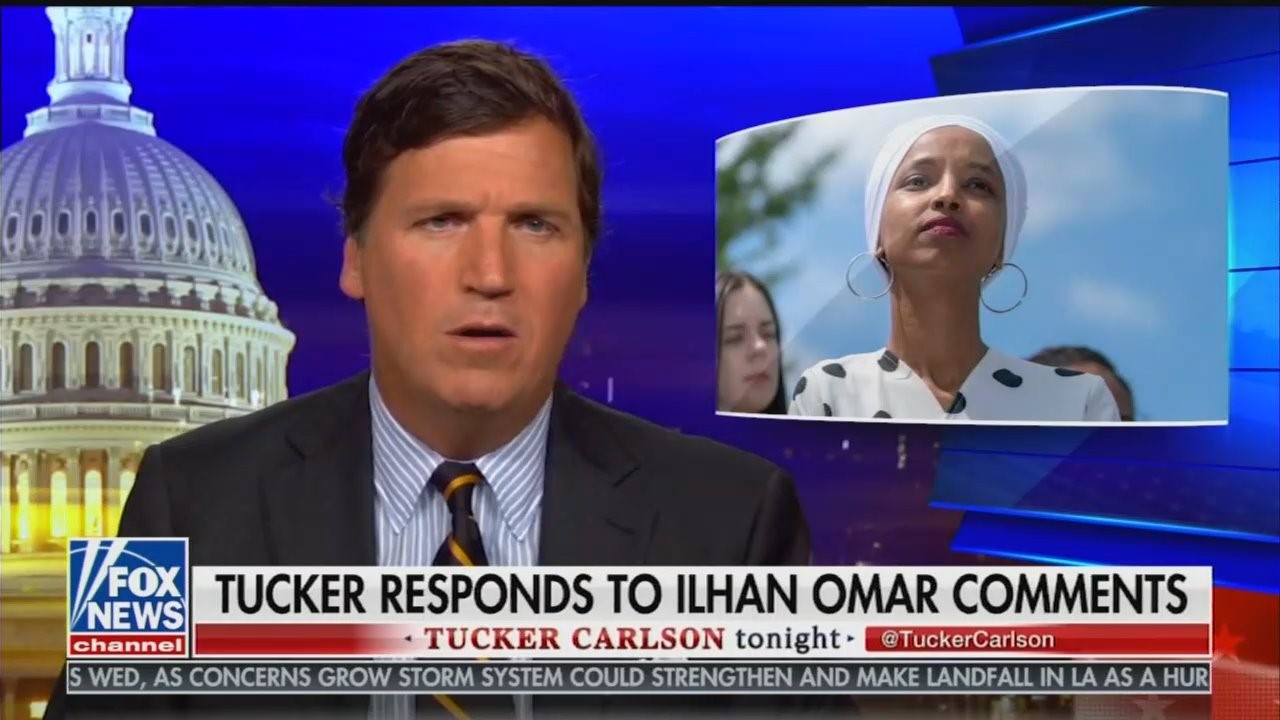 Fox's Tucker Carlson Tonight made some waves at the end of Tuesday's program, when Carlson called Rep. Ilhan Omar a "living fire alarm" of the danger of welcoming immigrants who hate the United States. It was certainly a hot take, and it underlined once again that the liberal elites -- the ones who claim to love democracy and free speech -- will not tolerate criticism of Omar.

Carlson cited the mostly gushy Washington Post profile of Omar, where we pointed out the reporters signaled that some people (like Tucker) shouldn't be allowed to comment, since Omar suggests "something bigger -- a battle over the American story -- who was entitled to tell it and how it would be told."

The boycott-conservatives squad at Sleeping Giants tweeted "Even for Tucker Carlson, this is outrageously racist. Advertisers need to wake up. By financially supporting this show and the people who rubber stamp these messages, you are sponsoring white supremacy. Full stop."

The leftist group Muslim Advocates tweeted: "The anti-Muslim rant against @IlhanMN by @TuckerCarlson was not based in any policy or substance: it was just hate-speech. @FoxNews should #FireTuckerCarlson & advertisers should drop him."

Bizarrely, a Jewish group called Bend the Arc: Jewish Action tweeted: "This is a violent & dangerous attack on a sitting Congresswoman because of who she is and what she stands for. It’s white nationalism in action."

Speech is violence. Criticism is racism. Omar retweeted that and added:

Advertisers should not be underwriting hate speech.

The Jewish group backing one of the biggest anti-Semites in Congress listed some of Carlson's advertisers: Starkist, Weather Tech, and NutriSystem. They added the hashtag #DropFox.

Carlson responded in kind on Wednesday:

CARLSON: Needless to say, the Left went berserk....Ilhan Omar and her allies in Congress immediately demanded that this show be pulled off the air. They didn't rebut what we said, any of our points or even acknowledge them. They just tried to silence us. That's how they operate. And of course they called us racist.

On one level that's amusing given how absurd the charge is. This show more than any other show on television has taken an aggressive position in favor of colorblind equality and against racism, particularly the casual racism of the modern world left.

We despise the current habit of judging people on the basis of their skin color. It's wrong. We say that virtually every night. Racist? No. We're against racism, adamantly.

Omar consistently puts her own race at the center of the conversation, but to us, it's irrelevant. Ayaan Hirsi Ali, for example, would by the standards of identity politics by Omar's standards seem to have everything in common with Ilhan Omar.

Like Omar she was born in Somalia, moved to Kenya and eventually came to this country. Unlike Omar, Ali loves and cares about the United States. She believes our country is superior to the country she came from and she says that.

For saying that, the left despises her. Omar's friend Linda Sarsour once tweeted that Ali deserves to be mutilated for her beliefs. So two Somali immigrants, one among the most impressive people in America, the other among the least, it's not about race.

But of course Omar and her friends already know that. Nothing they say on the subject race is sincere. It's all a hustle designed to get them what they want.

Omar has made a career of denouncing anyone and anything in her way as racist. That would include virtually all of her political and personal opponents. It includes even inanimate objects like the proposed border wall, that's racist. So is the United States Congress, so is the entire state of North Dakota, she once tweeted.