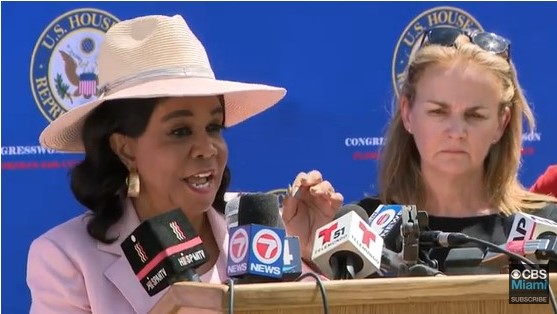 The "fact checkers" at Snopes.com are running to the defense of liberal Democrats again in a July 10 post headlined "Did Rep. Frederica Wilson Advocate Prosecuting People Who ‘Make Fun’ of Congress?"

The answer is yes. But David Mikkelson at Snopes insisted "context is key," that conservative media outlets like the Washington Times and the Daily Wire skipped over how Wilson was responding to rude Facebook memes.

What Wilson said was an obvious fact:

In the Democrat's defense, Snopes actually turned to FoxNews.com, which added "Wilson’s comments came amid a controversy over a Facebook group that includes Border Patrol agents and where they allegedly mocked and posted graphic content about members of Congress, including New York Rep. Alexandria Ocasio-Cortez."

The liberal journalism site ProPublica reported that a secret Facebook group apparently for current and former Border Patrol officers included rude messages about how someone should "throw a burrito" at Latina members of Congress and included memes about Rep. Alexandria Ocasio-Cortez performing oral sex on an immigrant, or on the president. There is no evidence provided that these Facebook posters were actual Border Patrol officers, or just someone who was admitted to the group.

Snopes argued "as other news outlets noted, Wilson was clearly referring to shutting down the secret Facebook group and seeking prosecution of persons who posted material online intended to intimidate or threaten members of Congress (acts which are already illegal); she was not advocating jailing anyone who simply used the internet as a medium for poking fun at Congress."

They turned to a video of Wilson's remarks. Apparently a reporter asked for comment on the secret Facebook group at 6:44, and about 90 seconds later, Wilson uncorked her rant about prosecuting people.

Even if you insist that Wilson was referring to the ProPublica story, rude oral-sex memes do not constitute a threat. Throwing burritos at officials would be violence, but making burrito-throwing jokes on Facebook inside a secret group isn't a message directly threatening a legislator. Wilson could only feel threatened after reading a ProPublica article that was created to promote a liberal message against Border Patrol officers.

Snopes links to Wikipedia's article when it throws the word "illegal," but it's clear from that article that most of the violent talk and harassment and doxxing directed at legislators in the Trump era is committed by the Left.

Trying to provide "context" to this liberal gaffe isn't a "fact check." It's a "let's add context" spin on behalf of gaffe-prone Democrats.