USA Today TV critic Kelly Lawler was less than impressed at the latest "docudrama" trashing the life and legacy of Fox News creator Roger Ailes on Friday under the headline "Voice, and Ailes, may shock and horrify you." 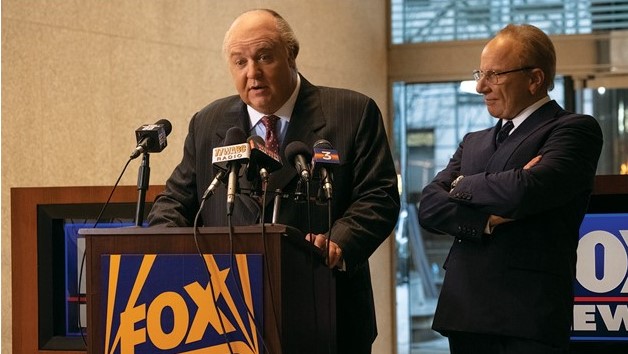 Showtime's The Loudest Voice (Sunday, 10 EDT/PDT, ★★½ out of four) had to take a side, and it's one that will likely have Fox talking heads discussing a "liberal media bias" (or liberal Hollywood, take your pick).

But as much as Voice will anger many Fox News lovers, it isn't necessarily more than a shlock horror show for the haters.

Based on the reporter Gabriel Sherman's 2014's book The Loudest Voice in the Room, and Sherman's magazine reporting, Voice unloads a laundry list of alleged evil deeds. As portrayed by Russell Crowe under a mountain of prosthetics, Ailes keeps women in a form of sexual slavery, colludes with Republican strategist Karl Rove after 9/11 to get the U.S. involved in the Iraq War, indulges conspiracy theorists to try to bring down President Barack Obama and steers millions of Fox News viewers for a very personal, petty agenda.

We here at NewsBusters probably won't be angry. From the sound of this, we'll get together and laugh at it, like the overwrought Sarah Palin-screams-at-Nicolle-Wallace-and-throws-the-phone scene in HBO's Game Change.

While Lawler found the episodes on early Fox News history "offer some insight," they lose their way in later episodes:

The episodes play out scenarios that are so familiar they sometimes are dull, playing too plainly to Ailes' staunchest critics. The series also attempts to draw a direct line from Ailes to the election of President Donald Trump, including Ailes saying "make America great again" in a 2008 speech, a sequence that proves far too heavy-handed.

The screenwriter for this project is Tom McCarthy, who glorified the liberal Boston Globe reporters crusading against the Catholic Church in the Oscar-winning movie Spotlight.

Even as the series is quick to paint Ailes as a megalomaniacal villain, it also recognizes his brilliance in building the news network into a machine that delivered ratings and changed minds....In the end, Voice just isn't anywhere near as skilled at rhetoric and storytelling as Ailes was.

As Christian Toto noted in his review, "Hollywood didn’t go all in on not one but two Ailes projects to obsess over his sexual gluttony. We’re still waiting for dueling projects about Matt Lauer, Charlie Rose and Les Moonves. Here’s guessing we’ll keep on waiting, too."