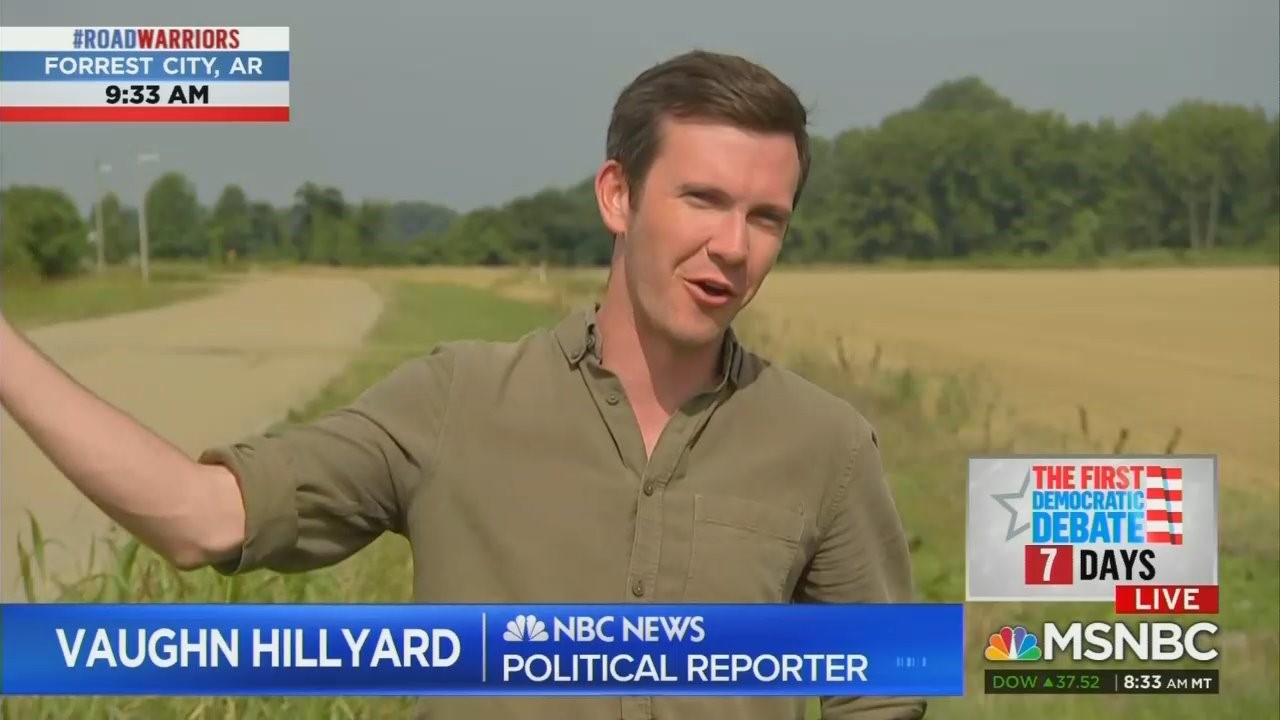 The Washington Free Beacon reported two fact-manglings at the scene of MSNBC on Wednesday. Nic Rowan noted reporter Vaughn Hillyard weirdly claimed in a report from Arkansas that President Trump didn't mention abortion in his re-election campaign launch in Orlando on Tuesday night.

"And President Trump last night, I want to note that down in Orlando, there was a key political issue that he did not mention from the stage," Hillyard declared on Live with Hallie Jackson. "That was abortion, that was access to women's reproductive health care."

In reality, Trump drew anger from abortion advocates for this part of his speech: "Virtually every top Democrat also now supports taxpayer-funded abortion, right up to the moment of birth: ripping babies straight from the mother's womb."

"Republicans believe every life is a sacred gift from God," Trump said, followed by enthusiastic applause. "That is why I have asked Congress to prohibit extreme late-term abortion."

Why did @MSNBC reporter @VaughnHillyard falsely claim that President Trump "did not mention" abortion during his speech in Orlando last night?

Roll the tape! President Trump will ALWAYS fight for the sanctity of life! #FakeNews pic.twitter.com/NE5Nf51V2H

It's a little hard to imagine where Hillyard would miss Trump's abortion remarks, and make the MSNBC "Road Warriors" sound so asleep at the wheel, like Chevy Chase in National Lampoon's Vacation.

A couple of hours later, as Zack Faria reported, MSNBC host Kasie Hunt made the classic liberal error of assuming segregationists must be Republicans. "Still to come, Joe Biden references his relationships with two former Republican colleagues at an event in New York City. The only problem? They were both segregationists," Hunt said, referring to Herman Talmadge (D-Georgia) and James Eastland (D-Mississippi).

Hunt did not correct her comments when she returned from the break, but she did correct it on her Twitter account on Wednesday night:

Earlier today, I inaccurately said Sens. James Eastland & Herman Talmadge were Republicans. They were, of course, both Democrats. We regret the error. We’ll make sure to correct it on the show tomorrow, but wanted to correct the record here in the meantime.

It should be noted that Hunt is only 34 years old, so she was born after both Senators left the Hill. Eastland retired in 1978, and Talmadge was defeated by Republican Mack Mattingly in the Reagan wave election of 1980. MSNBC might need an editor who remembers the political scene before 1980.