Laughable Jim Acosta: 'I Have Never Witnessed' Any News Outlet Taking a Stand on Issues

Publishers Weekly magazine has a new interview with CNN's Jim Acosta under the headline "Speaking Truth to Power: PW talks to Jim Acosta." [Hat tip: Ken Shepherd.] Will Boisvert was a tougher interviewer than Acosta's colleague Brian Stelter, but that's not saying much. The last question and answer was a hoot:

PW: Is there a grain of truth to claims of biased coverage of President Trump and his supporters by the mainstream media?

ACOSTA: I have never witnessed a concerted effort by any news organization to take a stand one way or the other on a political issue, to damage one particular party or help another. We have been far more honest and straightforward with the American people than President Trump has. Are there times when we fall short? Sure. But the press issues corrections. When was the last time you saw the president issue a correction or a clarification? It’s a rare thing for Donald J. Trump.

This is about as plausible as saying "I have never witnessed any person eating a hamburger."

The interview began with typical questions about the "enemy of the people" phrase, and Acosta being banned from the White House for nine whole days. But this question was pretty good: 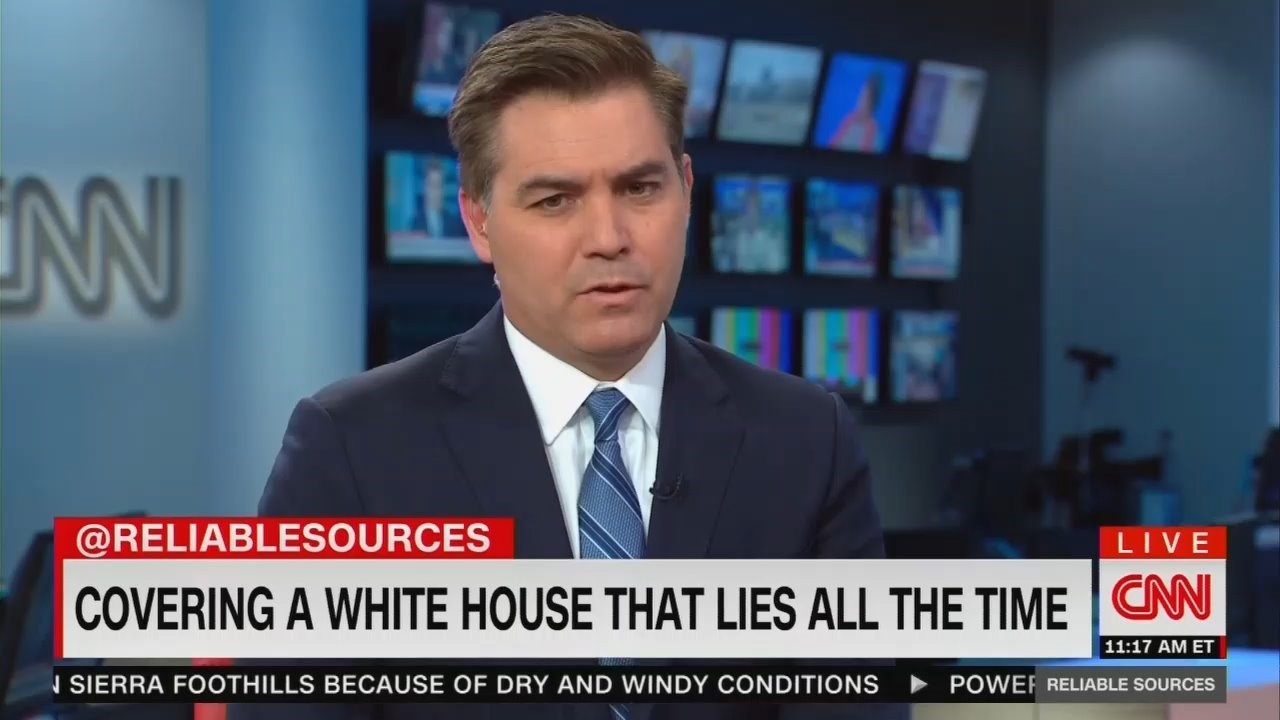 PW: The White House and other critics have accused you of grandstanding. Let me ask about an exchange in your book with White House press secretary Sarah Sanders about Trump’s border policies, when you asked her, “Where does it say in the Bible that it’s moral to take children away from their mothers?” Is that question more about editorializing than news-gathering?

ACOSTA: Critics say things like that, but at the White House I’ve broken stories, gotten exclusive interviews, questioned four heads of state and two presidents. In the book there’s a lot of new reporting on the administration. So I have been making it all about the news. As for that question, Attorney General Jeff Sessions used a Biblical reference to justify the policy [of family separation at the border]. So I thought, well, Sarah Sanders is the daughter of a Baptist preacher, perhaps she might weigh in on this. I suppose a critic could read that question as grandstanding, but a creative question aimed at penetrating talking points and spin is sometimes the right way to go.

Acosta's questions are "creative" and "penetrating."

There was a Charlottesville question, so Acosta repeated "there aren’t two sides to the story when it’s a matter of right and wrong. There’s nothing right about neo-Nazis causing so much mayhem that a woman is dead in the streets. You can’t be neutral about something as heinous as neo-Nazis and white supremacists."

But you can be CNN and be supportive of communist dictators and heinous abortion conglomerates. And then there was a question on presidential lying:

PW: Writing about the Trump administration, you say that “never had an administration been so willing to distort the truth publically or to rely on fabrications to justify its behavior.” Is President Trump worse in that regard than other presidents? For example, has Trump’s dishonesty done more damage than Lyndon Johnson’s use of deceptive claims about attacks in the Gulf of Tonkin to escalate the Vietnam War, or George W. Bush’s use of untrue claims about Saddam Hussein’s weapons of mass destruction to justify the Iraq War?