PolitiFact Panders to Their Liberal Audience: Let's Have a Mueller Report Book Club!

Liberals right now are incredibly angry that the American people aren't all buying copies of the Mueller Report and lining up to impeach and remove President Trump, despite the fact that Mueller found no collusion or "coordination" between Trump and the Russians and he played cutesy by suggesting Trump is "not innocent" on obstruction of justice. The Mueller Report is now coming under scrutiny as politically stilted and full of  "deception by omission," like Ukrainian businessman Konsantin Kilimnik -- a putative bad guy who associated with Paul Manafort -- being a trusted informant for the State Department.

But PolitiFact, which claims to be an "independent fact-checker," is pandering to its liberal audience by starting a Mueller Report Book Club! Liberals worship Mueller so much, we would joke this is like a secular-progressive Bible Study group.

PolitiFact founder Bill Adair, now at Duke University, was thrilled. He tweeted "Love this!" and then "Ready!" 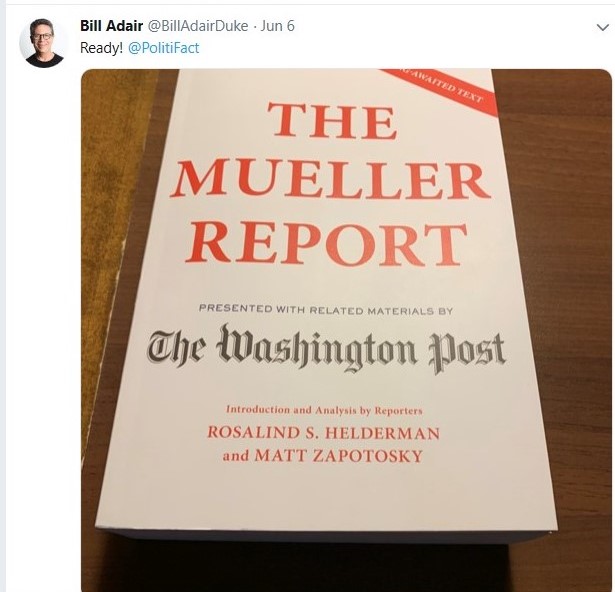 Editor Angie Drobnan Holic describes the Mueller Report as a "primary document," but no one would expect them to have a book club reading a House Republican report on Benghazi. Mueller loaded his team with Democrats, including lawyers who worked for the Clinton Foundation or attended the Hillary Clinton "victory party." But Donald Trump asserting that was flagged as suspect by the liberal fact-checkers.

Here at PolitiFact, we have a special devotion to primary documents; they tend to be sharp knives cutting through puffery and exaggeration. And we wouldn’t be fact-checkers if we didn’t love to read. By inviting you to read the Mueller report, we are not suggesting that you take sides or come to a predetermined conclusion. Rather, we’re inviting you to do what we do every day: Keep an open mind while you look at the facts in order to determine what actually happened.

The act of reading the Mueller Report like a very trustworthy "primary document" is a predetermined conclusion, just like liberals would presume a Bible study is something only crazy fundamentalists do. Holan continued:

So this summer, we invite you to join a special online book club: PolitiFact’s Mueller Report book club. We’ll introduce you to the report and each week suggest a set amount of reading. As we read the report together, PolitiFact journalists will offer analysis and take your questions. We’ll compile the most insightful reader conversations and post them to our website. (The online book club is free; you just have to sign up for our weekly email.)

In an age of distraction, the ability to read at length and think critically is more important than ever. And the duties of citizenship require us to keep ourselves informed so that we can cast votes responsibly and hold our elected officials accountable. It’s not often that a book club is also an act of civic responsibility, but this may be that time. We hope you’ll join us.

Since they're so tremendously open-minded, perhaps PolitiFact can toss in an opposing point of view, like Sean Davis writing that the media's Collusion Delusion was a "Catastrophic Media Failure."