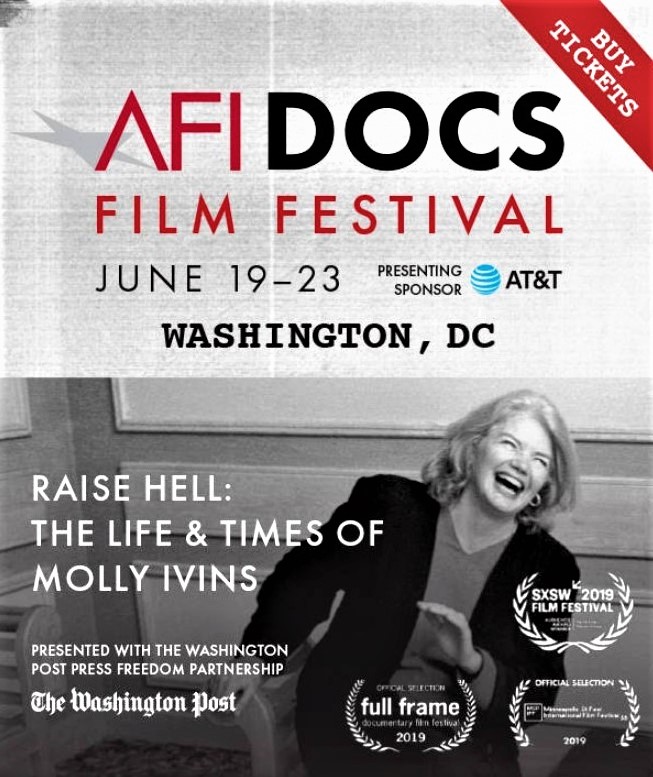 The Washington Post is not shy about branding itself as a crusading leftist paper. I received an e-mail this morning titled "Special Offer: Join The Washington Post Press Freedom Partnership at AFI Docs Film Festival June 19-23."

Their "press freedom partnership" was founded in November 2018 as "an ongoing initiative that aims to highlight organizations working vigilantly to promote press freedom and raise awareness of the rights of journalists worldwide." It also is supposed to demonstrate the paper's "longstanding commitment to safeguarding journalistic independence."

But the Post is promoting one particular documentary at the film festival. It's titled Raise Hell: The Life and Times of Molly Ivins, a tribute film to the late radical-left columnist for the Dallas Times-Herald best known as one of the nation's most fervent Bush/Quayle bashers. The ad also notes the festival sponsorship of AT&T, the new owners of CNN.

So "journalistic independence" is a code word for "rollicking ridicule of Republicans." A gushy Hollywood Reporter review explained:

The doc borrows its tone of colorful Texan bluntness from Ivins, and establishes it right away with a clip from Late Night With David Letterman. Ivins had followed Dan Quayle during the 1988 presidential campaign. “I found him dumber than advertised,” she says. “If you put that man’s brain in a bumblebee, it would fly backwards.”

...Her targets were mostly on the right. Shrub: The Short But Happy Political Life of George W. Bush — co-written with Lou Dubose, one of the most frequent commentators in the film  — was one of the best-sellers that made her famous. But she could be appalled by the left, too. In a private video included here, an uncharacteristically disheartened Ivins says she is so disgusted by Bill Clinton’s welfare reform that she will not vote for him or any presidential candidate in the ’96 election.

That's the liberal media's kind of "independence" -- finding both parties too far to the right.

Disgraced CBS anchor Dan Rather and MSNBC host Rachel Maddow are brought in to celebrate Ivins:

The most valuable comments about Ivins come from the people closest to her, personally and professionally: her brother and sister, and colleagues like Dubose. But Dan Rather and Rachel Maddow, used sparingly, put her career appreciatively into context. “She was not afraid to be angry, but she made a case that she was doing it because it was deserved, and she made you laugh while she was doing it,” Maddow says of Ivins’ attacks on the powerful. “I don’t know anybody else who does that now.”

The trailer hailing her as the cliched voice of the voiceless also features Ivins mocking Newt Gingrich as the "draft-dodging, dope-smoking deadbeat dad who divorced his dying wife." That's infected with some fake news, as the Post's own Paul Farhi noted in 2011: "[Jackie] Battley wasn’t dying at the time of the hospital visit; she is alive today."