So Subtle! CNN Screams on Screen Trump Unleashes 'FLURRY OF LIES' on Russiagate 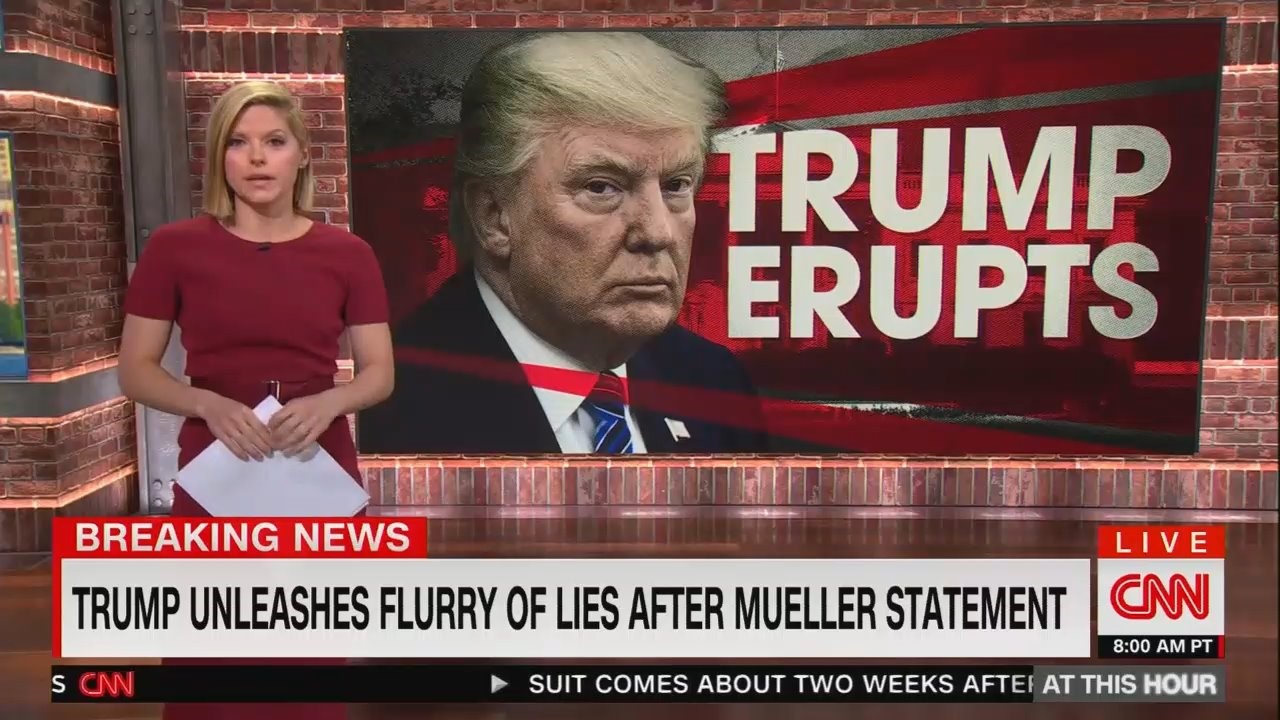 CNN spent hours on Thursday morning with a screen graphic reading "TRUMP UNLEASHES FLURRY OF LIES AFTER MUELLER STATEMENT." At the top of the 11 am hour, standing in front of large letters that said "TRUMP ERUPTS," anchor Kate Bolduan proclaimed "The president spoke and said a lot. And in doing so, he denied reality. and I don't say this flippantly. He lied. He also confirmed a report that depicts him as so insecure he can't even stand to see the name of someone that he doesn't like."

CNN makes it sound like Trump erupted like a volcano of lies, not just a flurry. Bolduan declared "It is still not normal, and it is still deserving to be called out." CNN's John Avlon insisted "the president doubling, tripling down on this outright falsehood. In fact saying if anything, Russia was trying to get Hillary Clinton elected. That's just nonsense words." It's "the exact opposite of what is true."

The "flurry" screens began in the 9 am hour, as Avlon ranted about Trump's "unhinged outburst," and declared Robert Mueller "is the last honest man in a world of political grifters confronting a blizzard of lies."

This also happened at the top of the 10 am hour, anchor Jim Sciutto proclaimed "President Trump has now unloaded on the probe and on Robert Mueller himself, and the prospects of impeachment now, and really unloading like we have never seen before."

That's not true at all -- Trump has "unloaded" on the Russian probe hundreds of times, sending CNN for the smelling salts -- but it's good cable-news hyperbole to prevent channel-changing.

After a video clip of Trump saying "Russia didn't help me at all. Russia, if anything, I think, helped the other side," Sciutto replied "Well, there's no evidence of that. Literally, minutes earlier the president had tweeted in fact 'I had nothing to do with Russia helping me to get elected.' Those are the president's words, in fact, he tweeted that twice," he said with a chuckle.

It's understandable that liberal Obama aides like Jim Sciutto believe Trump jokingly asking the Russians about getting Hillary's deleted emails was "collusion." Or that Donald Trump Jr. meeting for a quarter-hour with a Russian lady was "collusion." But why can't CNN acknowledge that there IS evidence of Russians helping the Clinton campaign? The Clinton campaign funded Fusion GPS sending ex-British spy Christopher Steele to Russia to get anti-Trump dirt from his Russian contacts. Why do they call themselves "Facts First"?

Then co-anchor Poppy Harlow announced "Let's go to Poppy Harlow at the White House. Abby, where do we begin? Clearly, the president feels a need to attack the special counsel with blatant lies. I think the fundamental question is Why?"

-- At noon, CNN host John King expressed "the President wants the last word or words and doesn't care if that those words include lie after lie."

-- CNN anchor Brianna Keilar began the 1 pm hour "We being with a litany of lies from the President of the United States....President Trump stood before reporters ranting about Mueller, shouting insults, falsehoods and outright lies over the din of an awaiting Marine One." Later she called it a "lie-riddled spiel."

-- CNN host Brooke Baldwin opend the 2 pm hour with "This morning the President of the United States stood on White House grounds and went on a rant. Telling a flurry of lies. And I know, you've heard this before: Trump lies! If you're numb to that, you shouldn't be."

Who thinks this isn't a virtual perpetual motion machine of editorializing?