CNN White House shouter Jim Acosta has a new book coming out on June 11, and The Guardian took an early peek. The headline was blunt: 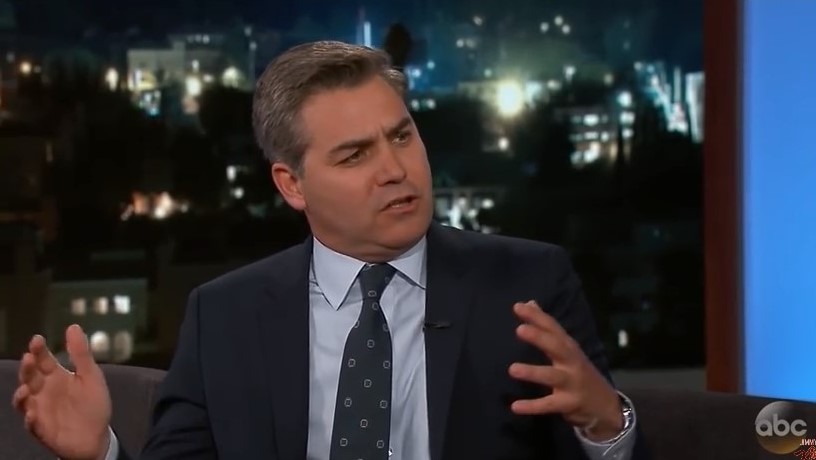 The book's title is also blunt: The Enemy of the People: A Dangerous Time to Tell the Truth in America. The book summary tells us "Acosta is tenacious and unyielding in his public battle to preserve the First Amendment and #RealNews."

In his book, Acosta admits to sometimes “grandstanding” and “showboating”. He also says he “opts for the bait” when questioning Trump, “which bothers some people”. Of concerns he may be biased against the president, he writes: “Neutrality for the sake of neutrality doesn’t really serve us in the age of Trump.”

Neutrality also wasn't the CNN rule under Barack Obama. He was bizarrely hailed as "scandal-free."

True to the style of Washington political reporting often complained about by Trump, Acosta mostly uses unnamed sources, many of whom are said to have spoken over social drinks. They are often blunt in their assessment of their boss. A “senior White House official” tells Acosta: “The president’s insane.” A “former White House national security official” says staffers were not sure the president had not been “compromised” by Russia.

This is exactly the kind of anonymous sourcing that's irresponsible, just protecting someone taking a pot shot. Did either of these sources -- or it could be the same person -- work for President Obama? That would color the quote, wouldn't it?

The Guardian also warned that before Acosta's book comes out, "Trump-friendly media has been ramping up criticism of the CNN reporter."

This week, the Fox News website cited one unnamed CNN employee as saying: “Jim Acosta is, a lot of times, asking the right questions, but it doesn’t always need to be about him and his grandstanding. Acosta is supposed to be a correspondent reporting the facts but you can’t tell the difference between him and a paid pundit.”

This source would be wrong. Acosta isn't asking the "right questions." Usually there isn't much of a question. It's more of a lecture, or an attempt at shaming.

As the president and his aides claimed exoneration [from the Mueller report], Acosta writes, “Trump once again called the press ‘the enemy of the people’.

“‘You guys are dead now,’” he says an unnamed Trump surrogate told him, referring to the "mainstream media.”