Hilarious! Reporter Warns Intel Could Be Selectively Edited for a Trump Narrative

On CNN's New Day on Friday, New York Times reporter Maggie Haberman worried out loud that Attorney General William Barr's investigation into the origins of the Russia probe might lead to selective leaks from intelligence agencies that carry a partisan narrative to hurt Trump's political opponents. As if everything her paper and The Washington Post and CNN and so on have done hasn't been selectively leaked to harm Trump?

The lack of introspection in this oration is stunning. On the radio Friday morning, Chris Plante laughed that the reporters were acting like this was "the Pentagon Papers, in reverse." Suddenly, the Forces of Transparency wanted to stop the disclosures!

JOHN BERMAN: So you noted when you stepped back last night and watched this on the one hand and then also what happened with William Barr, where the president granted William Barr unprecedented authority to declassify intelligence, and unprecedented authority to get the cooperation of the other intelligence agencies, it's clear that the president, to me, is trying to retake the initiative here.

HABERMAN: No question. And I think that -- I don't think that we should understate how big a deal this was that this happened. And to be clear, there are legitimate reasons to look into how this investigation began. I do think that that is important to talk about.  I think that the question -- and people who have worked in the intelligence space have expressed this concern and certainly critics of the president have -- is, is Bill Barr going to selectively declassify information so that it then gets into the public sphere, painting a certain light?

And whether it's that or whether it's videos that sort of are momentary, you know, edits that are made to paint somebody a certain way, there is a narrative that gets portrayed. And I think the concern is, is this really going to be showing everybody, the general public what happened in 2016? Or is this going to be done to harm the president's political opponents.

As if the narrative we've been hearing about Russia and 2016 for the last two years wasn't a matter of selective editing?

It got funnier. Then Alisyn Camerota was mortified at the idea that Bill Barr might not be "completely objective." As if CNN is? 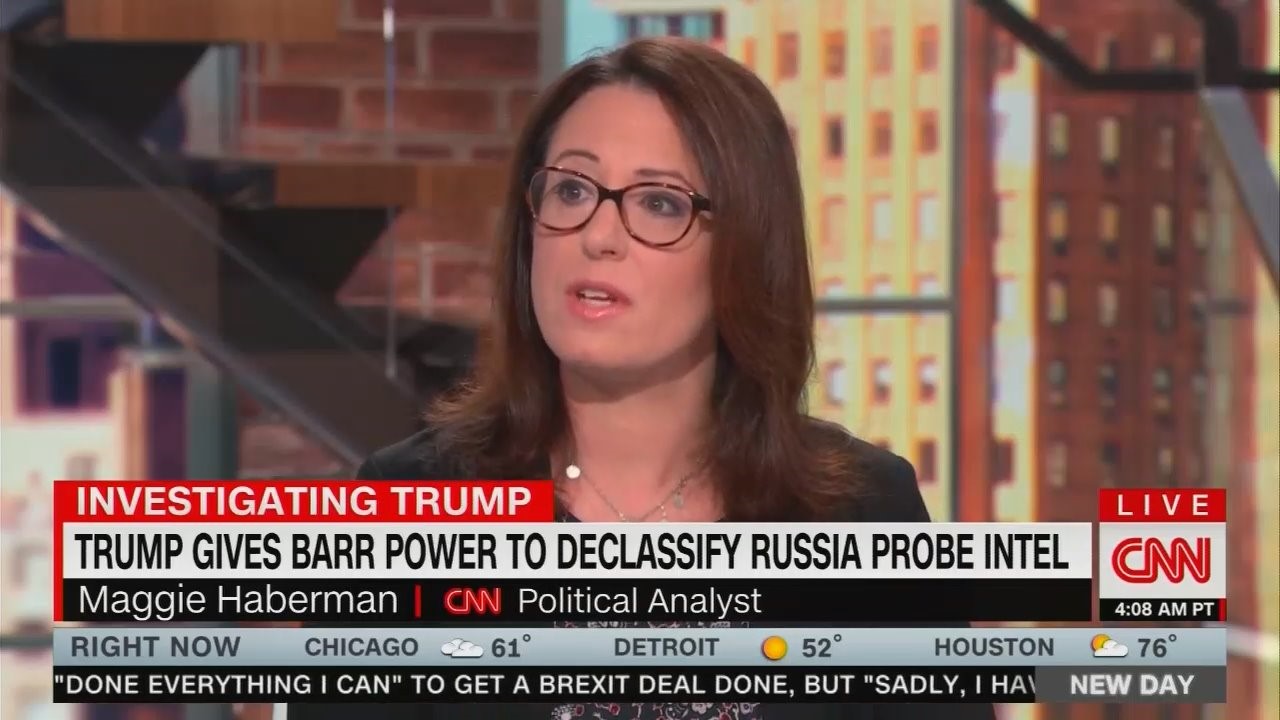 CAMEROTA: Do we know the answer to this? Based on experience --

CAMEROTA: I'm not guessing. I'm saying, based on experience with how Bill Barr has misrepresented the Mueller report, don't we have some experience that he will not depict this in a completely objective way?

HABERMAN: I'm really reluctant to predict what he's going to do. And I will say, in his favor, he did release almost the entire Mueller report. And that was not a guarantee, at all, that that was going to happen several months ago.

Chris Plante also pointed out with amusement how Joe Scarborough ranted and raved about Trump irresponsibly lying and calling the Russia probe a "witch hunt"....and then he turned around and called the declassifying.....a "witch hunt."