Here's one obvious way Meet the Press host Chuck Todd isn't trying to be Tim Russert. Instead of asking Bernie Sanders a hardball about why he explicitly praised America's communist enemies during the Cold War, he framed the question as a Democrat primary voter would frame it. How are you going to get around the oafish conservatives and their nasty tweets?

CHUCK TODD: The New York Times spent a lot of time talking about your trips to Central America. I know you got pretty worked up about those things. I think the larger question, and let me just frame the question this way, the larger question's going to be, if you're the nominee, whether you like it or not, the right's going to basically hammer and sickle you to death. How do you prevent it?

SEN. BERNIE SANDERS:Well, I don't mind the right wing doing it. But I understand they will do it. I don't want the media to do it.

Oh, an attack on the First Amendment! Let's all hyperventilate! This softball lets the viewer assume there's no evidence Sanders was commie-friendly, which would be very misleading.

Then Bernie yammered "Look, when I was a young man, I plead guilty. I voted -- I worked hard, as a young man, against the war in Vietnam. I don't apologize for that. As a member of the United States House, I helped lead the effort against the war in Iraq, which turns out to have been the worst foreign policy blunder in the modern history of the United States."

On and on he went, about war in Yemen, and Trump wanting to go to war in Iran, but he never addressed the question of his sucking up to communists. Todd didn't follow up, even as he had several opportunities. 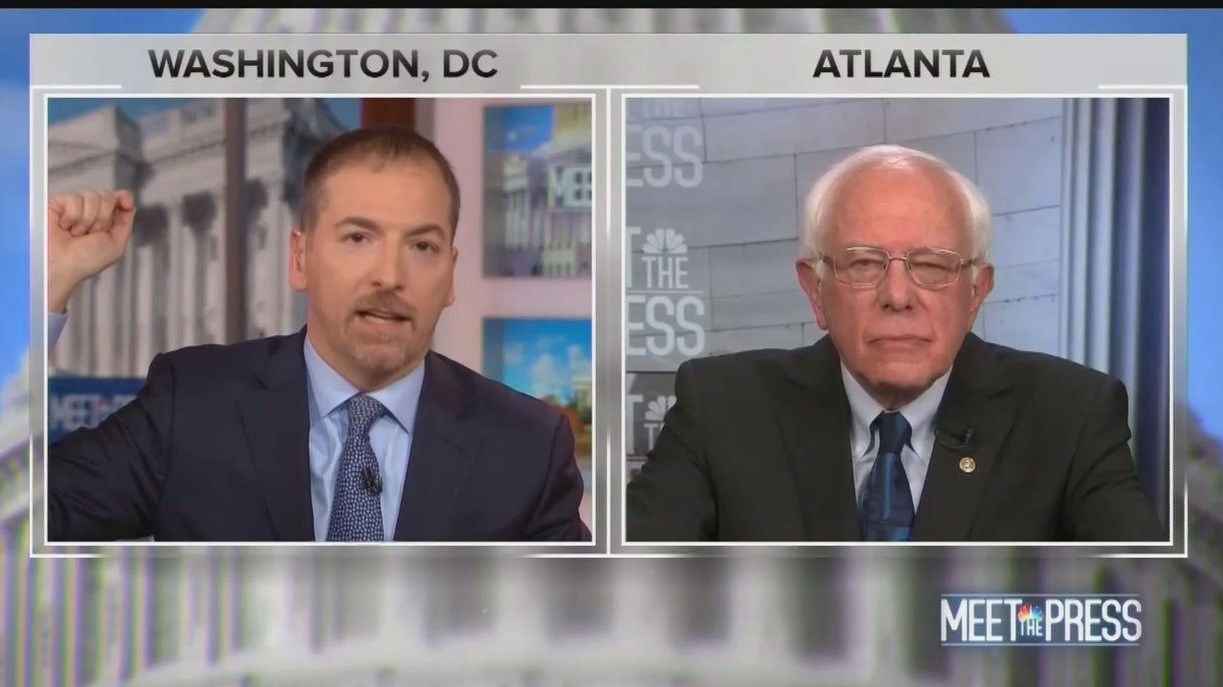 Then Bernie said this: "In Saudi Arabia, for example, for decades, we have supported a murderous regime which fights democracy every single day." Like the communist regimes.

And Bernie said: "I don't think you have to wreck the economy to tell China that you cannot have, I guess, it's the equivalent of almost concentration camps. Look, the United States -- and very sadly, under Donald Trump, we have moved in exactly the wrong way. He supports authoritarian governments all over the world. I believe we have to support democracy and human rights." And Bernie supported communist regimes.

Todd could have simply shown the videos of Sanders that are going to be shown by journalists who aren't pussy-footing, like they once worked on the Tom Harkin for President campaign. Or he could quote Sanders from the Times:

“As a mayor, I did my best to stop American foreign policy, which for years was overthrowing governments in Latin America and installing puppet regimes," the 2020 Democratic presidential hopeful said in an interview with The New York Times. “I did everything that I could as a mayor of a small city to stop the United States from getting involved in another war in Central America trying to overthrow a government."

There are several obvious journalist questions that emerge from that:

1. How was it your job as a mayor to travel around "stopping" American foreign policy? Would you have liked mayors running around opposing Obama's foreign policy?

2. If you oppose "puppet regimes," what would you call Castro's Cuba, or the Sandinistas in Nicaragua?

PS: I must belabor the obvious, and point out that Chuck Todd NEVER discloses to viewers that his wife's direct-mail firm took almost two million dollars in payments from Bernie's 2016 campaign.