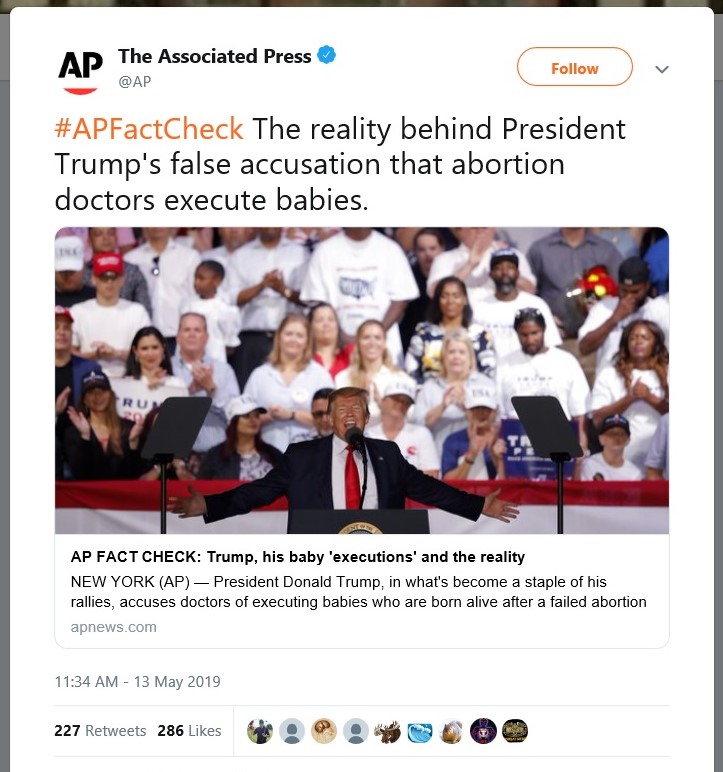 AP reporter David Crary -- someone we have often cited for a liberal cultural bias -- began with a typical editorializing flourish.

NEW YORK (AP) — President Donald Trump, in what’s become a staple of his rallies, accuses doctors of executing babies who are born alive after a failed abortion attempt.

His comments, meant to taint Democrats, have been embraced by many anti-abortion activists, and assailed as maliciously false by many medical professionals.

Crary quotes two medical professionals, both from the left: Cara Heuser, who recently testified against a Utah bill limiting abortions to before 18 weeks of gestation, and Diane Horvath, "a fellow with Physicians for Reproductive Health and medical director of Whole Woman’s Health, which operates abortion clinics in several states."

This is how Crary set up the "fact checking." 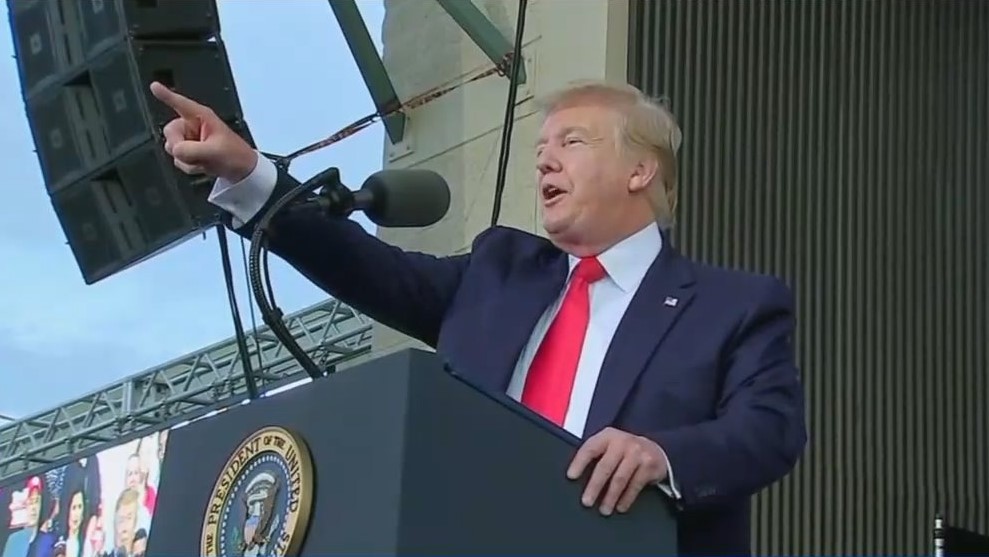 TRUMP: “Democrats are aggressively pushing late-term abortion, allowing children to be ripped from their mother’s womb, right up until the moment of birth. The baby is born and you wrap the baby beautifully and you talk to the mother about the possible execution of the baby.” — rally in Panama City Beach, Florida, on Wednesday.

THE FACTS: Federal data suggests that very few U.S. babies are born alive as a result of a failed abortion. The Centers for Disease Control and Prevention recorded 143 deaths between 2003 and 2014 involving infants born alive during attempted abortions.

The second sentence is borrowing from what Gov. Northam said in an awkward radio interview about how a baby "unsuccessfully" aborted would be treated.Obviously, people who decided to have an abortion can't be expected to change their minds about wanting the baby dead. In Virginia, Del. Kathy Tran admitted in testimony that her "pro-choice" bill would allow abortion in the third trimester right up until birth.

Crary's check is the most egregious version of something many "fact checkers" have criticized Trump for talking about late-term abortions.

PolitiFact tagged a version of this Trump rhetoric as "False" on April 29. They called it "grossly oversimplified," just as Crary complained Trump is "oversimplifying a deeply complex issue." Snopes called Trump "Mostly False" on February 9, charging the president with "stripping away the nuance and context" of the Democrat governor's clumsy radio interview. The Washington Post "Fact Checker" wrapped it into a long State of the Union rebuttal/"fact check" on February 6.

All these "fact checkers" are working overtime to provide the "context" and talking points of abortionists and their advocates to rebut the president.

We have rated this AP Fact Check as "Deeply Distorted." For similar analyses, please visit our Fact-Checking the Fact Checkers site.