Ryan Saavedra of the Daily Wire did a little Internet searching to reveal the differing "news judgment" on Catholic kids vs. Muslim kids. He tweeted on Saturday:

CNN has *not* reported on the kids in Philadelphia who were allegedly singing about chopping people’s heads off.

Remember Chris Cuomo lecturing the Covington kids were "victims of their own choices"...for wearing MAGA hats? But it's not just CNN. Just as we know everyone climbed all over the first small snippet of video somehow indicting the Covington Catholic kids for smirking or doing "tomahawk chops," pretty much everyone on television skipped over the story that sounded so, well, "Islamophobic." It's not hard to conclude that our secular media has a serious loathing of pro-life Catholics, and a serious blind spot on death poetry at Muslim events. 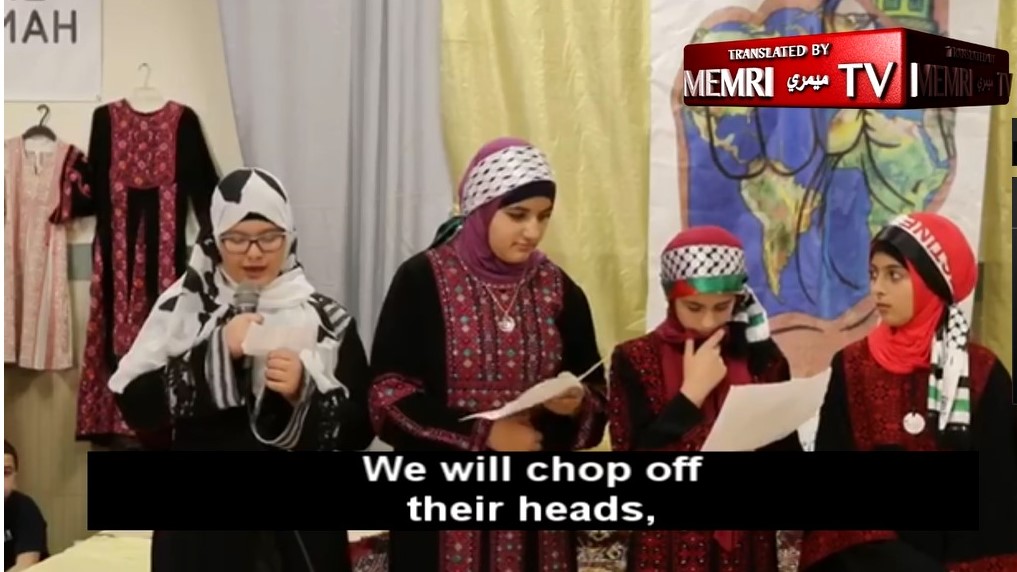 Disturbing footage of Muslim kids saying they would sacrifice themselves and kill for the "army of Allah" surfaced from an Islamic center in Philadelphia.

The Muslim American Society (MAS) Islamic Center in Philadelphia posted the video to its Facebook page celebrating "Ummah Day" in which young children wearing Palestinian scarves sang and read poetry about killing for Allah and the mosque in Jerusalem.

"These are not isolated incidents; they are happening in major centers of the country – including in Pennsylvania," MEMRI said in a statement....

One girl talks about martyrs sacrificing their lives without hesitation to conquer Jerusalem.

"We will defend the land of divine guidance with our bodies, and we will sacrifice our souls without hesitation," a second girl says. "We will chop off their heads, and we will liberate the sorrowful and exalted Al-Aqsa Mosque. We will lead the army of Allah fulfilling His promise, and we will subject them to eternal torture."

MAS Philly belongs to the Muslim American Society (MAS), which has 42 chapters in the United States and one in the United Kingdom.

A Nexis search suggests one program did mention the video: Lou Dobbs Tonight on Fox Business on May 3.

DOBBS: Disturbing new video of Muslim children in Philadelphia saying they would sacrifice themselves and kill for the army of Allah. The video from the Muslim American Society Islamic Center, the young girls can clearly be heard saying "we will defend the land of divine guidance with our bodies. We will sacrifice our souls. We will chop off their heads."

Surely, an "objective" reporter could determine that children singing songs about beheading and "eternal torture" is more disturbing than smirking at an Indian. What possible defense do journalists have in suggesting that the Covington kids were a national outrage....compared to this video? They have to fall back on the notion that....it's in Arabic, and maybe it wasn't translated correctly? So our national media can't hire their own translator to check it?

You won't find this story published in the nation's top newspapers, either, and let's single out The Washington Post, which was sued by Sandmann for its one-sided Covington coverage. The Post website carried an  Associated Press dispatch by Jennifer McDermott:

A video showing children speaking in Arabic about sacrifice and chopping off heads wasn’t vetted before being posted on the Facebook page for the Muslim American Society’s Philadelphia chapter, and it does not represent their values, the executive director of the national group said Sunday.

Executive Director Ayman Hammous said the Muslim American Society learned of the content of the video after the Middle East Media Research Institute posted a translation Friday. The society issued a statement calling the video “disturbing” and condemning the words used in it....

The Philadelphia chapters of the Council on American-Islamic Relations and the Anti-Defamation League also condemned the words used in the video. Iftekhar Hussain, chairman of the council chapter, said Islamic tradition “categorically rejects either speech or actions that harm in any way our Jewish brothers and sisters.” The ADL says that children should not be indoctrinated to hate because “the only chance for a peaceful future is to teach our children to pursue peace.”