Snopes.com claims to be a fact-checking website, but its recent rash of Alexandria Ocasio-Cortez defense items suggests it's a liberal clickbait site. There are five items just in the first 15 days of April. None of them evaluate if AOC mangled facts. They're all on defense. 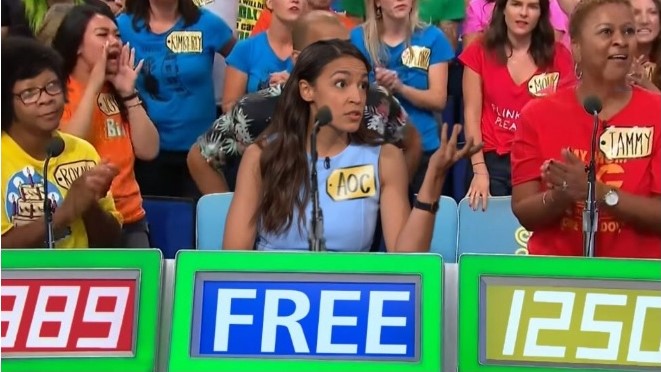 -- April 15: "Did U.S. Rep. Ocasio-Cortez Repeatedly Guess ‘Free’ on TV Show The Price is Right?" False. Who is dumb enough to believe this one? (People who believe CNN has a large washing machine for new stories, apparently.) The humorous but obviously fake photo was created by the Christian satire site Babylon Bee, a Snopes nemesis. But Snopes suggested in an accompanying video that "Without context, it's inevitable in today's misinformation age that some people will see, believe, and keep scrolling."

Bethania Palma explained: "Ocasio-Cortez, who at 29 is the youngest woman ever to serve in Congress, is the frequent target of inflammatory clickbait, hoaxes, and conspiracy theories."

-- April 6: "Did Rep. Alexandria Ocasio-Cortez Forget to Vote for Her Own Bill?" False. At least this is a more plausible fact claim, even if the source is some meme from "The Real Animal Farm." Over a photo of AOC, it reads "The face you make when you lose 0-57 then realize you didn't vote for your own bill." David Mikkelsen, the site's co-founder, didn't link to the meme.

The Republican Senate voted on a "Green New Deal" bill on March 26 to put Democrats on the record. The House Democrats would not. One would think voting Americans would know there are more than 57 people in the House of Representatives.

-- April 4: "Did Rep. Alexandria Ocasio-Cortez Claim Walls Could Not Be Built in Mountains?" Unproven. It took some time to find and decry this one, from a February 22 Facebook post by Congressman Steve King that quoted AOC as saying "All the technology in the world won't let us built a wall in Mountains!" They couldn't verify the quote, and King's staff wasn't talking.

It's quite funny, after all this, that on April 14 in a news section, Snopes posted an AP story headlined "Study: Fox News Is Obsessed with Alexandria Ocasio-Cortez." As if liberal outlets are not!

We have rated these Snopes "fact checks" as Half Baked. For similar analyses, please visit our Fact-Checking the Fact-Checkers site.