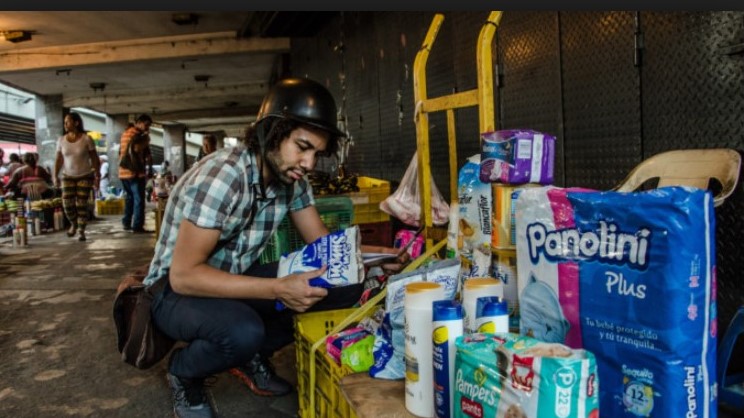 We have noted many times how the media cannot manage to bring the word "socialism" into the dialogue as Venezuela crumbles into ruin. On National Public Radio's interview program Fresh Air on Tuesday, substitute host Dave Davies chatted for 37 minutes with Nicholas Casey, the "Andes bureau chief" of the New York Times. Online the headine was "New York Times Journalist Describes An 'Almost Unimaginable' Crisis In Venezuela."

A look at the transcript shows about 3,800 words are uttered about the collapse of Venezuela on NPR before they get near the S-word. And then Davies merely said it in passing: "Why don't you give us a little refresher on how we got here? Maduro took over when the previous socialist leader, Hugo Chavez, died in 2013."

A sophisticated leader would pick up the radical-left notes. Casey described an influx of doctors from communist Cuba, but their attempts at health care were very carefully timed and targeted:

NICHOLAS CASEY: In the last elections that were taking place in 2017 and 2018, there was a doctor who was explaining to me about how he was in a small town and wasn't able to give medication to certain patients that were from the opposition, and also was told to withhold things like oxygen tanks and not put them out early in the year because they wanted to bring out all of the medicine and the oxygen tanks, which were largely in shortage, just before the election, just before people were going to vote, essentially to give the impression that Maduro had solved this medical crisis before people had to go vote for him again. And this was something that had just left this doctor seething that he had to do that.

As usual, liberals in the American media wanted to praise the socialists for their programs, and if things were mismanaged, it was something impersonal and international like declining global prices for oil:

DAVIES: The political crisis, of course, was driven by a terrible economic crisis. Why did the Venezuelan economy collapse so completely?

CASEY: It collapsed because of years and years of economic mismanagement that started back to the time of Hugo Chavez. Now, Venezuela's economy was always run off of oil. And Chavez, when he became president in 1999, began a real transformation of Venezuela that was meaningful to many, many Venezuelans. I knew many families who were able to get out of poverty, were able to get law degrees, were able to get education, were able to set their children up for a completely different future under the changes that took place under Chavez's government, without a doubt.

But the secret to what Chavez was able to do was largely based on the government being extremely rich. Oil prices were above $100 a barrel, which meant that the government had basically infinite amount of money to do what it would. And for a large part, it decided to make massive investments in Venezuela's barrios. This started to change when the price of oil started to change. And the price of oil began to, you know, make these massive declines, starting 2014, 2015. And suddenly, the government wasn't as rich as it used to be.

NPR, like the rest of the liberal press, doesn't want to "stain" the definition of socialism by defining Venezuela accurately as a failure of socialism.