Top Obama aide Valerie Jarrett is plugging a new memoir, and in 12 minutes and two interview segments on All Things Considered, NPR had one challenging question for her: what about this touchy-Biden issue? Jarrett said she was "honored" to serve with Biden. she has "enormous" respect for him...and the voters will decide. (If he gets in.)

NPR anchor Audie Cornish strangely compared Biden to Al Franken, who's "not in office right now." But Franken was photographed with his hands on a woman's breasts while she slept, and his accuser said he also sexually harassed her and forcefully kissed her -- all worse than Biden.

When they turned to the wider stage of Campaign 2020, it sounded like a Democrat precinct chat, and Cornish seemed to worry that none of the contenders would match the wondrous appeal of Obama, who was... "an idea," not just a person: 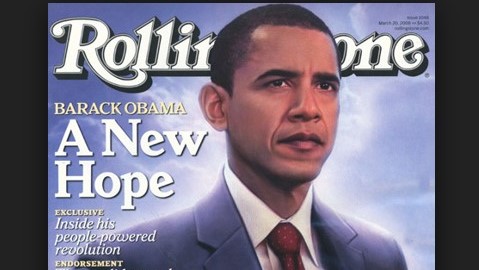 AUDIE CORNISH: What's your advice for these 2020 candidates, especially who - they're essentially looking to capture the coalition of voters that Barack Obama and your campaign with him was able to do, right? And now there is a question about whether the party can really do that, or do they have to choose, right? They're mired in this question about identity politics versus the white working class vote, or more progressive politics versus a kind of centrism. He seemed to straddle a lot of these ideas....Is that possible now?

JARRETT: Yes, and I think what President Obama did, which I encourage all the candidates to do, is to take a view of our country that's inclusive, where you reach out to everyone. [Even bitter clingers?] Politics should not be about the politician. Politics should be about service. And people recognize - I think they can see through, in many instances, where people are not authentic. And they crave authenticity --

CORNISH: But wasn't he kind of the ultimate cult of personality candidate? I mean, Barack Obama was a - almost a concept - right? - an idea in - that was - that people thought symbolized many things.

JARRETT: And I think that there's still opportunities in the future to do that broad reach, to connect with people the way he was able to do. And I think we're very early in the primary season. I think that Democrats have an embarrassment of riches. We have lots of great candidates who are on the field.

Yawn along as Jarrett advised the Democrats not to beat each other up in the primary, and focus on the general election, and stay positive: "He [Obama] spent most of his time talking about what his vision was, what he would bring to the country, how he would improve the lives of the American people. And I think that there is still room in the hearts of the American people for that candidate."

There was no time to discuss (or associate Obama with) reparation payments for blacks, or the repeal of Obamacare, or the Green New Deal, or anything else that might bring the sainted Obama down to a more earthly plane.