Something weird happened on March 6. Both PolitiFact and The Washington Post flagged Hillary Clinton for a lie -- she was both rated "Pants on Fire" and "Four PInocchios" -- for claiming Wisconsin voters were "turned away" by the thousands in 2016 because of race.

She proclaimed in Selma on March 3: 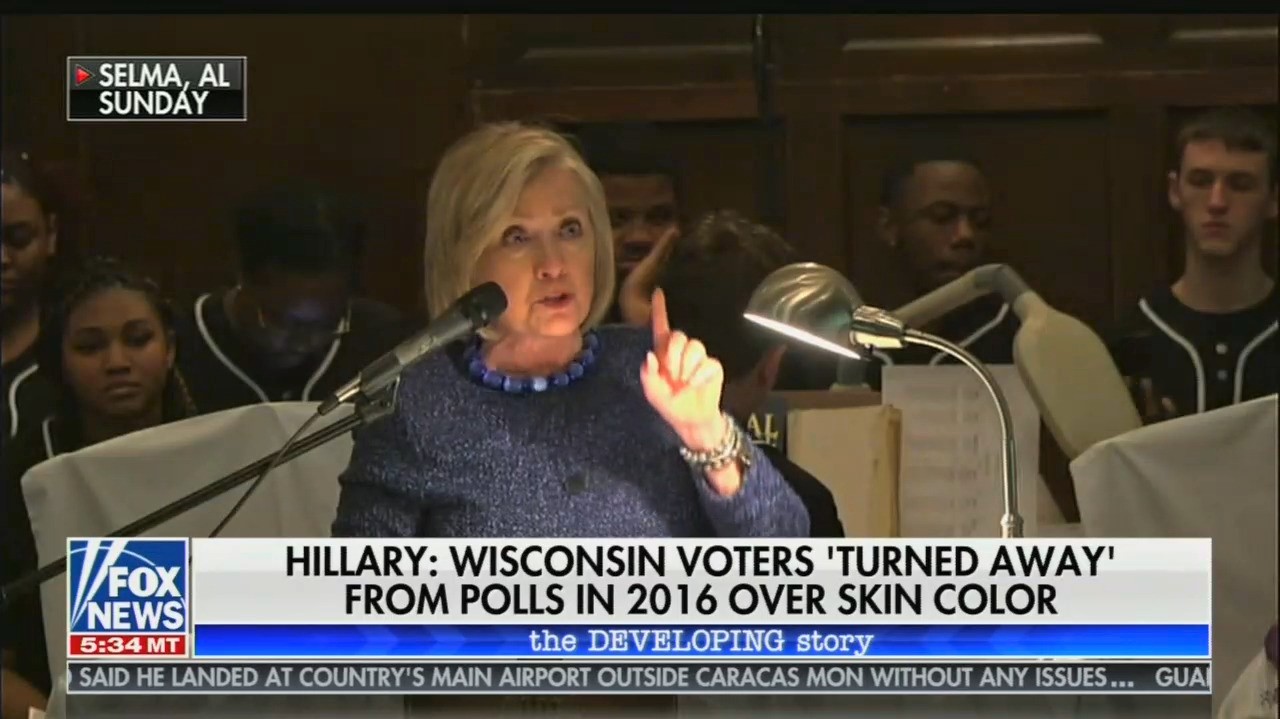 "I was the first person who ran for president without the protection of the Voting Rights Act. I’ll tell you, it makes a really big difference. And it doesn’t just make a difference in Alabama and Georgia. It made a difference in Wisconsin, where the best studies that have been done said somewhere between 40,000 and 80,000 people were turned away from the polls because of the color of their skin, because of their age, because of whatever excuse could be made up to stop a fellow American citizen from voting."

1. Wisconsin is not one of those formerly racist Southern states that were the subject of the Supreme Court's 2013 ruling on the Voting Rights Act.

2. Voters weren't "turned away" at polling places in Wisconsin. Studies just said voters were "deterred" by a new requirement for photo ID.

3. The author of the University of Wisconsin study that Team Hillary cited said you can't extrapolate Hillary into winning since he only studied two counties.

They didn't mention (4), which was Hillary Clinton never campaigned in Wisconsin during the general election campaign. Was that "voter suppression"? Is it surprising that black voters who turned out for Obama weren't as enthusiastic for Hillary?

Hillary's lie was not reported on ABC, CBS, NBC, PBS, or NPR. ABC and NBC did throw in a brief mention that Hillary was present in Selma on the March 3 evening newscasts:

TOM LLAMAS, ABC: And from Selma, Alabama, tonight marking civil rights history. Commemorating there for the 54th anniversary of what is known as Bloody Sunday in 1965, when Alabama state troopers fired on peaceful demonstrators at the Edmund Pettus Bridge. Top Democratic figures there as well, Cory Booker, Senator Bernie Sanders, and Hillary Clinton saying it's time to recommit to the fight for justice in America.

KATE SNOW, NBC: This was an emotional day in Selma, Alabama. Activists and politicians gathered, despite the rain, to mark the fifty-fourth anniversary of Bloody Sunday. That`s when peaceful demonstrators were beaten as they marched for civil rights across the Edmund Pettus Bridge back in 1965. Today, Hillary Clinton, Senator Cory Booker, and the Reverend Jesse Jackson were among those who linked arms to follow in their footsteps.

On the March 5 World News Tonight, anchor David Muir mentioned Hillary wouldn't run for president in 2020: "And it comes after her trip to Selma, receiving an award for her work on civil rights."

Even CNN and MSNBC, with all their hours of news, couldn't locate this campaign clunker. Instead, on March 4, MTP Daily host Katy Tur was obsessing instead about....Donald Trump and Wikileaks unfairly exploiting Hillary's missing emails in 2016.

Guess who did notice the glaring mistake? Fox News, including a segment on The Story with Martha McCallum on March 4, days before the other "fact checkers."

Among print outlets, the Post called out the lie (online), but the print story from Selma by Matt Viser avoided that offending quote. There was nothing in The New York Times or USA Today. Associated Press reported on Hillary, but offered no fact check. Reporter Errin Haines Whack:

In Selma, Clinton told those at Brown Chapel that the absence of crucial parts of the Voting Rights Act contributed to her 2016 loss to Trump. The Supreme Court in 2013 struck down a part of the law that required the Justice Department to scrutinize states with a history of racial discrimination in voting.

Clinton said "it makes a really big difference" and warned of the need for continued vigilance about voter suppression heading into the 2020 election.

The backdrop of Selma provides a spotlight on voting rights. Advocates say the gains achieved as a result of "Bloody Sunday" have been threatened in recent years, particularly by the 2013 Supreme Court decision.

Instead, the AP Fact Checker wrote an 1,876-word article attacking...Donald Trump's speech at CPAC on March 2.