The liberal media warn us of creeping authoritarianism, and democracy dying in darkness. But what about when radical leftists sue the government demanding an end to fossil fuels? Demanding that Congress and the White House be overruled by judges when then block the radical left? On Sunday night's 60 Minutes on CBS, Obama-loving Steve Kroft put together 13 minutes of one-sided propaganda that began like this: 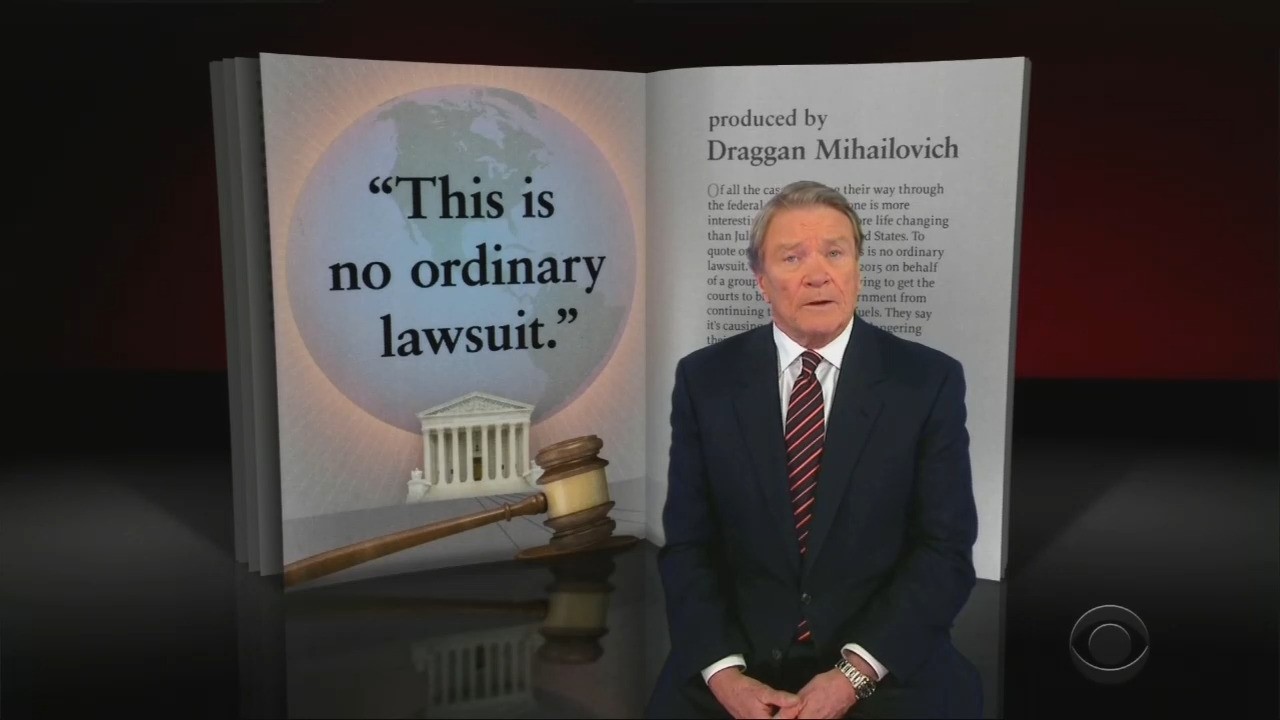 STEVE KROFT: Of all the cases working in their way through the federal court system, none is more interesting or potentially more life-changing than Juliana vs. the United States. To quote one federal judge, "This is no ordinary lawsuit." It was filed back in 2015 on behalf of a group of kids who are trying to get the courts to block the U.S. government from continuing the use of fossil fuels. They say it's causing climate change, endangering their future and violating their constitutional rights to life, liberty and property.

When the lawsuit began, hardly anyone took it seriously, including the government's lawyers, who have since watched the Supreme Court reject two of their motions to delay or dismiss the case. Four years in, it is still very much alive, in part because the plaintiffs have amassed a body of evidence that will surprise even the skeptics and have forced the government to admit that the crisis is real.

In addition to interviewing three young plaintiffs, Kroft gave large chunks of air time to leftist litigator Julia Olson, who claims the government has completely cried uncle and admitted to her argument that the world is in great peril from climate change and has known this for 50 years.

He plainly elaborated on the judiciary coup: "The lawsuit claims the executive and legislative branches of government have proven incapable of dealing with climate change. It argues that the government has failed in its obligation to protect the nation's air, water, forests and coast lines. And it petitions the federal courts to intervene and force the government to come up with a plan that would wean the country off fossil fuels by the middle of this century."

Kroft touted a ruling by district judge Ann Aiken, a Democrat who was appointed by President Clinton: "In November 2016, a federal judge stunned the government by denying its motion to dismiss the case and ruling it could proceed to trial. In what may become a landmark decision, Judge Ann Aiken wrote, "Exercising my 'reasoned judgment,' I have no doubt that the right to a climate system capable of sustaining human life is fundamental to a free and ordered society."

Then CBS turned to UCLA law professor Ann Carlson, presenting her as a somewhat neutral representative of the "legal community," which has felt the case was legally "doomed," since it demands the judicary be able to overrule the executive and legislative branches, even though she thought the child plaintiffs were "very compelling."

Chris White at the Daily Caller explained that CBS left out some important facts. "Carlson consults pro bono for Sher Edling, a San Francisco-based law firm working to file climate liability lawsuits across the country. None of this was mentioned during the Sunday report. She has made supportive comments about the lawsuits in the past."

KROFT: Why is the idea that the people of the United States have a right to a stable environment such a radical idea?

ANN CARLSON: Well, I think that Judge Aiken actually does a very good job of saying it's not radical to ask the government to protect the health, and the lives and the property of this current generation of kids. Look, if you can't have your life protected by government policies that save the planet, then what's the point of having a Constitution?

KROFT: How significant is this case?

CARLSON: Well, if the plaintiffs won, it'd be massive, particularly if they won what they're asking for, which is get the federal government out of the business of in any way subsidizing fossil fuels, and get them into the business of dramatically curtailing greenhouse gases in order to protect the children who are the plaintiffs in order to create a safe climate. That would be enormous.

Kroft said that's why the Trump administration is fighting it.