CNN Senior White House Narcissist Jim Acosta was infuriated when Fox News host Laura Ingraham made fun of him in a speech at the Conservative Political Action Conference on Thursday.

Acosta just flat-out lied when he wasn't called on at a Trump press conference in Hanoi, claiming "the President steered clear largely during this news conference of the White House press corps and was instead selecting journalists at random from the other side of the room where there were foreign journalists seated.”

LAURA INGRAHAM: Our friend....Jim Acosta of CNN. [boos]...He’s a nice person. He was complaining this morning on television — I know that’s not news — he was complaining that President Trump didn’t call on U.S. media at the post- summit presser and that he only called on the Russian and the Chinese journalists.

And I thought to myself 'well, that's kind of interesting, but it's kind of sad, because he'd probably get a better shake from the Chinese and the Russian journalists than he would, fairer treatment at least! But I thought -- I couldn't even believe that. Jim Acosta maybe has a point here.

Well it turns out, a producer just told me, he called on ABC, The Washington Post, The New York Times, Bloomberg, and NPR. But he just didn’t call on Jim Acosta! [Applause] The land of narcissism knows no bounds.

As our Curtis Houck reported, Acosta was "Pants on Fire" when he complained the White House press corps was ignored. There were at least six members of the White House press corps that were called on, starting with the very first questions from Major Garrett of CBS and John Roberts of Fox, in addition to Jon Karl of ABC (who asked about Michael Cohen), Ayesha Rascoe of NPR and print reporters (David Nakamura of The Washington Post, David Sanger of The New York Times, and Margaret Talev of Bloomberg, whose owner Michael Bloomberg might run against Trump).

Acosta was surely angriest that Fox primetime host Sean Hannity asked a question as well. Then Acosta went to Twitter and attacked Ingraham, ignoring his lying and insulting her wisecracks about Russian/Chinese journalists might be fairer than CNN et cetera: 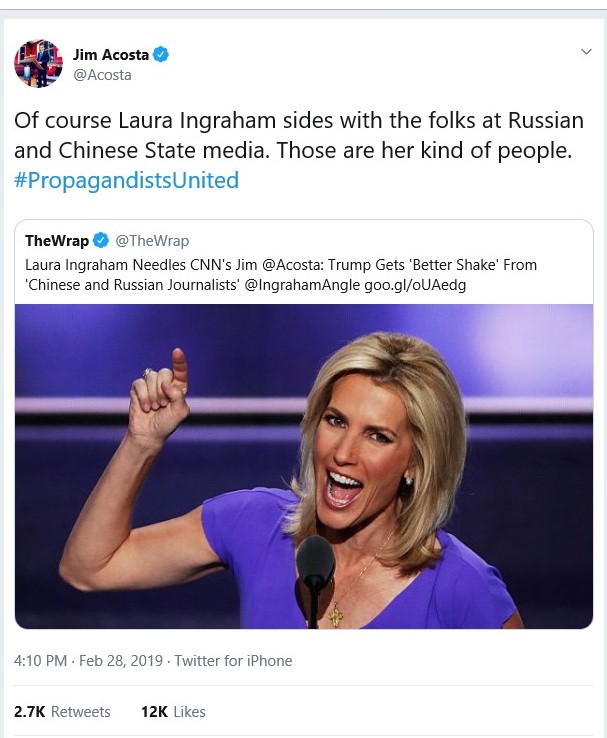 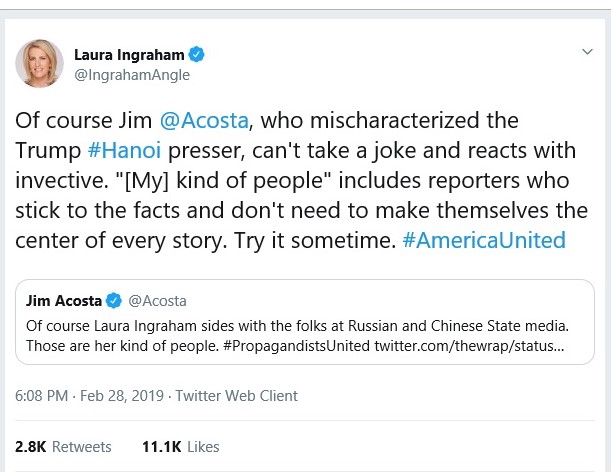 During the hand off from Sean Hannity Thursday night, as Ingraham took the reins to begin her own show, she feigned concern for Acosta. "We need get a care package or something [to him], some of that good seaweed, that dried seaweed you can get in Vietnam...some elixirs maybe. I think he’s having a hard time.”