On PBS, David Brooks Warns Democrats 'Somewhere to the Left of Che Guevara'

Friday night's pundit segment on the PBS NewsHour began in a predictable way, as both pseudoconservative David Brooks and liberal Mark Shields rained fire on President Trump declaring a national emergency to secure federal funding for a border wall. But after both pundits agreed that Democratic presidential hopeful Pete Buttigieg was "impressive," Brooks was gently asked if the Democrats were getting too progressive, and he dropped a bomb. They were "somewhere to the left of Che Guevara."

Anchor Judy Woodruff was as mild and vague as their headline, noting a "Democratic platform shift." A shift to where?

JUDY WOODRUFF on Buttigieg: He's coming down on the progressive end of the spectrum, I think it's — I think that's fair to say, David. He talked about the Green New Deal. He talked a little bit about taxing the rich, which has obviously come up among the Democrats, Medicare for all, how to deal with health care.

Where do you see the Democratic field sort of shaking out in that way? And does it — I mean, is it shaking in a direction that helps the party, or not?

DAVID BROOKS: It's somewhere to the left of Che Guevara, I guess. (Laughter)

Brooks was joking, but then he turned serious as to how he just can't support this stuff. (Interesting, since he wrote a gushy column about "gladiator" Kamala Harris, who firmly endorsed the vague Green New Deal concept on CNN.) 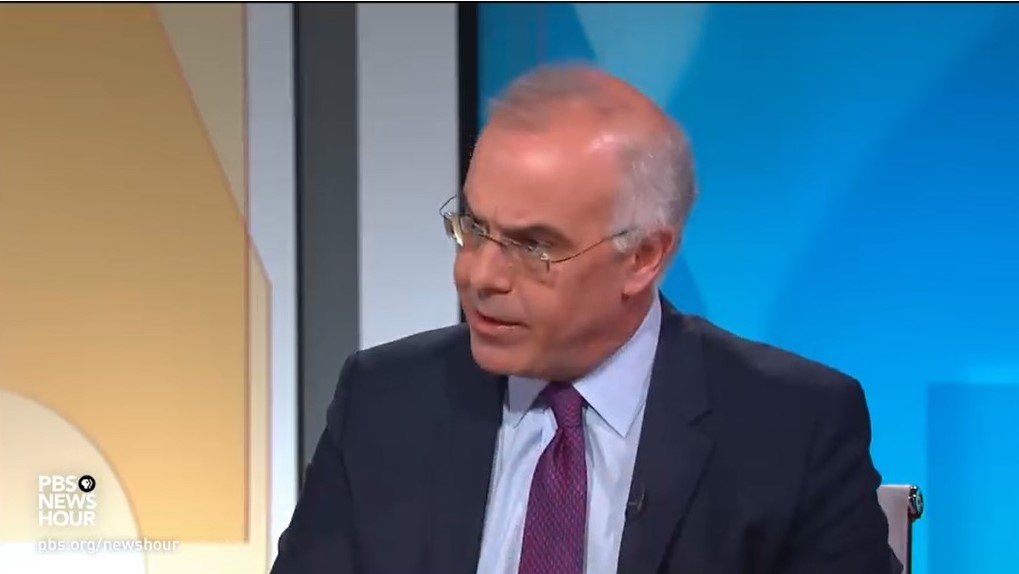 BROOKS: As Donald Trump makes it extremely hard to think about supporting somebody like that, I find the Democrats have done an outstanding job of making it hard for a lot of moderates to support anything. Personally, the idea that I could ever support a candidate who was in support of the Green New Deal, that will never happen. That could never happen.

It really is a centralization of power in a way we haven't seen and doesn't exist in Scandinavia. It used to be Democrats wanted to shift the tax code, shift the regulations in order to steer the market in a more humane direction, and I get that.

And that — being that kind of Democrat, you would be for a carbon tax in order to address global warming. This is not that. This is simply the government taking control of large swaths of the American economy, something I don't think the government is capable of doing.

Mark Shields wouldn't agree: "I think David has set up a straw man as far the New Green Deal is concerned. It is not something that has been endorsed by the Democratic Party or anything of the sort. It's gotten a lot of attention, and a lot of publicity and a lot of buzz, but it is not the Democratic platform by any means."

Neverthless, Shields warned the Democrats are in danger of overreaching after coming to power in midterms, and compared it to presidents then winning re-election -- in 1972, 1996, and 2012.

On NPR on Friday night, Brooks was so harsh in denouncing the Republicans and the president's declaration of national emergency, anchor Audie Cornish  turned to the liberal pundit and said "Matthew, I don't know what that leaves you."