The Most Fractured 'Fact Checks' of the State of the Union

Liberal journalists like Brian Stelter touted a Trump State of the Union speech as a "Super Bowl for fact checkers." This didn't used to be the case when Obama was president. But several "fact checks" flopped badly.

The most mocked attempt on Twitter came from NPR Politics. NPR annotates speeches, and on Tuesday night commented on all kinds of sentences, even "The state of our union is strong." David Harsanyi made the point neatly: 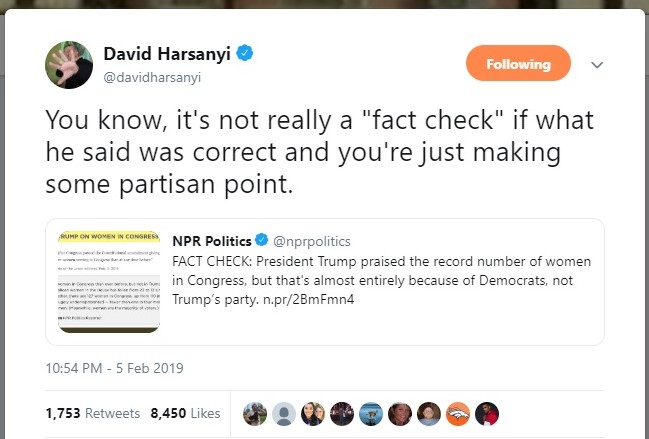 It's a classic pose, the "True But" kvetching. If it's true, why not move along to the next passage? After Trump acknowledged "we have more women serving in Congress than at any time before," Danielle Kurtzleben wrote:

There are more women in Congress than ever before, but that is almost entirely because of Democrats, not Trump’s party. The number of Republican women in the House has, in fact, fallen from 23 in the last Congress to 13 in this one.

Altogether, there are 127 women in Congress, up from 110 in 2018. But even with that large jump, women remain hugely underrepresented on Capitol Hill — less than 1 in 4 members of Congress is a woman. (Meanwhile, women are the majority of voters.)

We also enjoyed our pal David Rutz's tweet: "Trump actually does something magnanimous for once and NPR does a super-petty "fact check," God Almighty this is embarrassing, even for the sad annals of fact-checking".

Then there was Politico, making the classic "That's not really socialism" argument, just like in the 80s, lefties would say "true communism hasn't really been tried, the Soviet Union isn't really communist." Mark Hemingway hammered it: 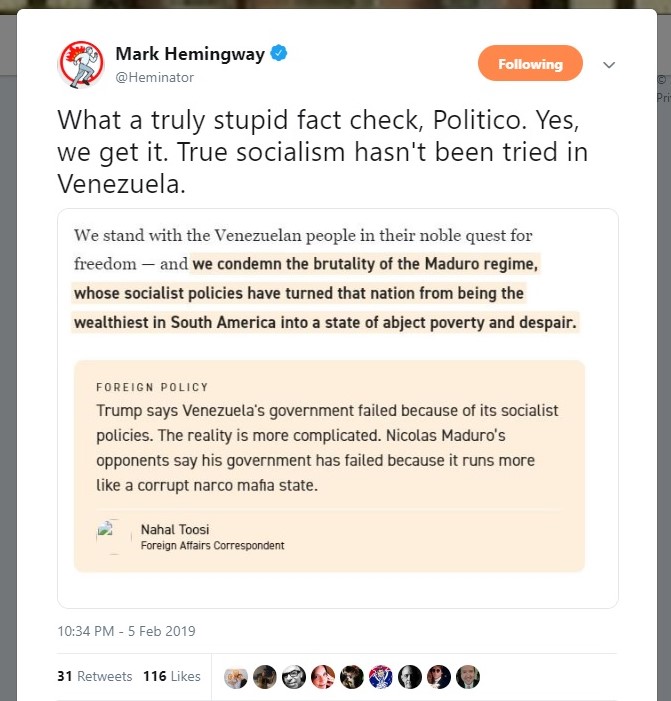 Politico annotated the speech like NPR, but their "fact checks" read more like Democrat rebuttals. In this case, Nahal Toosi objected on behalf of socialists: "Trump says Venezuela's government failed because of its socialist policies. The reality is more complicated. Nicolas Maduro’s opponents say his government has failed because it runs more like a corrupt narco mafia state."

Toosi also swaggered around in commenting on Trump's remarks on arms-control treaties: "Trump is dangling the idea of negotiating a new multilateral nuclear arms control treaty, while also being open to the idea of a new arms race. The odds of a new treaty coming together anytime soon are slim to none."

One test of "independent fact checkers" is obvious: Did they also fact-check the Democrat response?

AP did both sides (at least one check on Abrams).

PolitiFact did both, and found Abrams flaws -- claiming the economy was somehow bad, or that Trump is "caging" kids (as if detentions never happened under Obama. It was especially weird that Abrams claimed on the economy that "families’ hopes are being crushed by Republican leadership that ignores real life or just doesn’t understand it." She's completely ignoring record-low black unemployment, which is happening here in "real life."

We will also have to look at whether anyone fact-checked the Bernie Sanders rebuttal, the Kamala Harris pre-buttal, and the Xavier Becerra Spanish-language rebuttal. Don't get your hopes up.