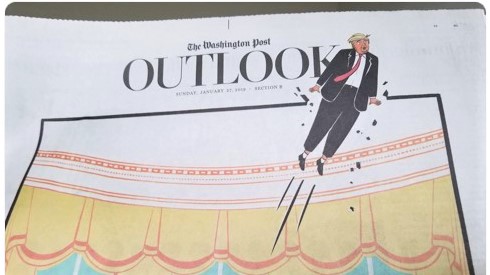 Last August, Washington Post nonfiction book critic Carlos Lozada wrote a very dismissive essay on six "sycophantic pro-Trump books," proclaiming none of them were "useful," since they didn't seek to convince the middle. He concluded: "For most Americans, it is the ballot box, not the bestseller list, where such determinations [judging Trump] are made, and where moralism and self-interest can and should mix. And it’s not hard to picture voters in 2018 or 2020 looking around, taking a breath and deciding they’ve had enough of the wackadoos."

Now, Lozada has sort of managed the opposite, reviewing seven books on impeachment, and none of those are judged not "useful" because they only speak to Americans who deeply want impeachment....because Lozada is one of those "wackadoos." (Okay, he manages to hint Bill Press's partisan take is "less persuasive.") His headline asks: "Can impeachment appear legitimate in a hyper-partisan universe?"

And the Post thinks it's thoughtfully outside the hyper-partisanship. (Guys, read your front-page motto again.) Or see the illustration of this article, with Trump being launched skyward out of his chair in the Oval Office.

The central point arrives deep in this 2,983-word essay, where Lozada betrays his very low opinion of Trump's voters, which he has also compared in other articles to....cancer cells and explosives. Trump voters could ruin the fun of impeachment:

Today, it is tempting to imagine that Trump’s impeachment and removal would take the country back to a saner, simpler time. This illusion ignores the enduring forces that brought Trump to power as well as the risks of impeachment itself...

[Jeffrey] Engel warns that impeachment “disrupts the American political landscape as few other events do, leaving scars for generations.” A failed impeachment drive could encourage the president’s most dangerous impulses, and even if it succeeds, impeachment only kicks out an offending leader, “it doesn’t fix the democratic decline that brought [him] to power,” [Laurence] Tribe and [Joshua] Matz remind.

“It doesn’t undo the havoc he wreaked while in office. And it doesn’t forestall the trauma of expelling him.” They worry that core supporters of the impeached leader would consider his removal “a gussied-up coup d’etat” and walk away from the American project, drift toward revolutionary politics or even commit violence — “especially if the ousted president refuses to depart gracefully and instead terrorizes the polity that rejected him.” And a graceful exit is hard to imagine under current management.

Yet not undertaking impeachment can be momentous as well.

Lozada concludes the piece by insisting Trump doesn't represent all the people, as if....Obama did??? Just because the Posties gushed over how "the sun glinted off his chiseled pectorals" didn't mean everyone did.

Obstruction of justice, violation of the emoluments clause, the betrayal of trust to a foreign adversary — any one of these is a significant misdeed that should be core to any impeachment process. Yet they all reflect Trump’s greatest offense against the American public and the American experiment, which is his lack of interest in faithfully executing the office of the president. His biggest lie, out of so many, occurred when he swore the oath and then, in his inaugural address, pledged to be a leader for all Americans. Trump governs for his own interests and those of his family, and for the cheers of his base. His opponents righteously declare that he is “not my president,” forgetting that Trump made that choice for them long ago.