USA Today acknowledged online on Twitter early on Monday that the viral first take on Covington Catholic students for "attacking" a Native American activist in Washington is unraveling: "The longer version of the incident is more complex, and now that it has surfaced, the rush to judge the teenagers is coming under attack." This tweet at 1:35 Eastern time is their latest Covington tweet as of 4 pm Eastern time on Monday. 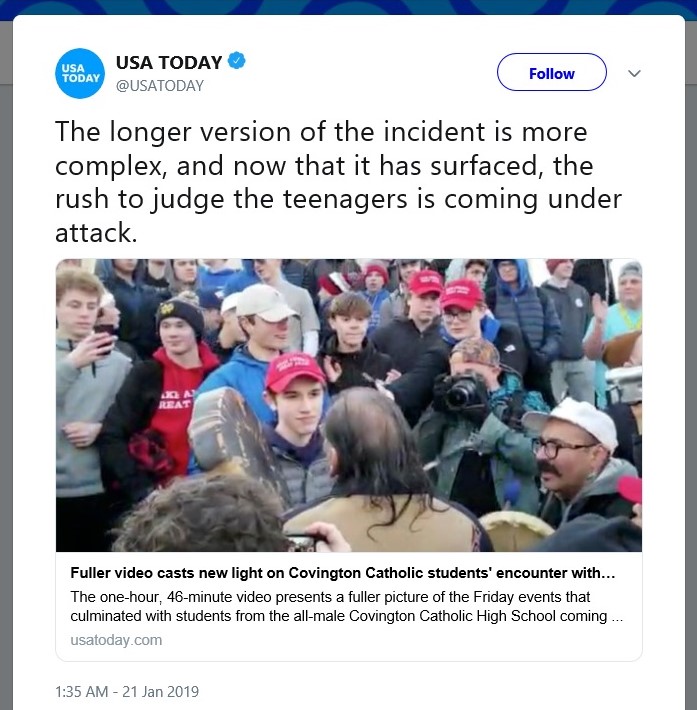 Unfortunately, that "rush to judge" is still right there in their Monday newspaper on page 3A under the headline:

For years, Native American advocate Nathan Phillips of metro Detroit has been fighting for the rights of indigenous people.

On Friday, his battle gained national attention, as social media videos captured his standoff with a group of taunting Catholic school students in the nation's capital.

Warikoo ran a bunch of Phillips quote smearing the teenagers as "beastly" haters: 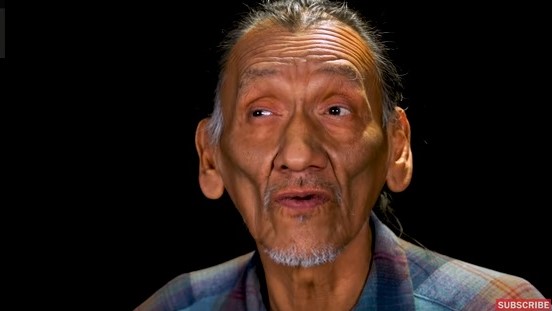 "They were in the process of attacking these four black individuals," Phillips said. "I was there and I was witnessing all of this ... As this kept on going on and escalating, it just got to a point where you do something or you walk away, you know? You see something that is wrong and you're faced with that choice of right or wrong. "

Phillips said some of the members of the Black Hebrew group were also acting up, "saying some harsh things" and that one member spit in the direction of the Catholic students. "So I put myself in between that, between a rock and hard place," he said.

But then, the crowd of mostly male students turned their anger towards Phillips.

"There was that moment when I realized I've put myself between beast and prey," Phillips said. "These young men were beastly and these old black individuals was their prey, and I stood in between them and so they needed their pounds of flesh and they were looking at me for that."

The bolded sentence about "beast and prey" was the larger "pull quote" in the story. No one asked if it was "dehumanizing" to call white teenagers "beasts." We can imagine the reaction if they were black or brown teens.

Then came the part where the USA Today headline came in:

The students had a "mob mentality" that "was scary," Phillips said. "It was ugly, what these kids were involved in. It was racism. It was hatred. It was scary."

Speaking from his niece's home, Phillips said: "I'm a Marine Corps veteran and I know what that mob mentality can be like. That's where it was at. It got to a point where they just needed something for them to ... just tear them apart. I mean, it was that ugly."

Phillips said he recalled "the looks in these young men's faces ... I mean, if you go back and look at the lynchings that was done (in America) ...and you'd see the faces on the people ... The glee and the hatred in their faces, that's what these faces looked like."

None of this would qualify as "facts." The newer version of USA Today's coverage by Jorge Ortiz (under the 1:35 am tweet) now blames all sides:

The fuller video would seem to assign more blame for the encounter on a group of four or five Black Hebrew Israelites, but it doesn’t totally absolve the youngsters, who were in the nation’s capital for the anti-abortion March for Life.